Anyone else having some issues after the latest release? My homey is not working well at all…

I can’t trust if something is on or not, it’s not reporting energy for some devices… Sometimes I can execute a command and sometimes not

Have booted it several times, removed the power for minutes, restarted it from inside the app etc…

if it’s z-wave devices, keep in mind it can take a while for the mesh network to be fully settled (for instance, leave it running over night and try the next day).
For how long did you wait to conclude it isn’t working well?
IT also can take up to 45 to 60 minutes before all apps are up and running (depending on the number and type of apps of course).

Haven’t seen any zwave problems here eigther. I Have several Fibaro, Aeotec and Neo Coolcam devices, all are working fine.

It started 24 hours ago, when none of my evening flows didn’t execute…
Restarted everything before I went to bed and 8 hours later there where still a lot of issues, hence I posted here too see if it’s only my system.

It has improved slightly, but not enough to rely on things…

For example in the picture attached.

The first circle “ute entré” is on and it’s reporting energy, the lights are on, but it shows that it’s off.

The second circle is my pool pump, it’s not on, needed to go down to it to check, but the energy is showing that is on and the energy is changing a little (as it does when it is running)

Make sure that the system time on your Homey is correct, it’s not unheard of that after a firmware update the time is completely wrong.

You can find the current time here: Homey Developer Tools (look for “dateHuman”).

If that isn’t set correctly, you need to re-set your Homey’s location (in the mobile app: “More > Settings > Location”, turn off “Find Homey’s location automatically” and find your home location on the map; if it’s already correct, just move it a bit, then back to the correct location).

After the update all my ikea tradfri lights are messed up! This is not the first time after a firmware update! Please fix those issues!

Something not working after a Homey firmware update? HERE'S THE SOLUTION Questions & Help

Pull The Plug (on Homey). (and if that doesn’t work, and your Homey is still using the original Athom power supply: replace it!)

it’s not unheard of that after a firmware update the time is completely wrong.

This should be fixed 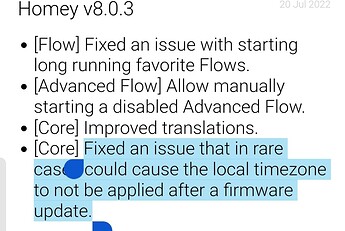 The time being off after restart happened here as well, but it really seems to be fixed.

My zigbee devices didn’t receive any updates after upgrade.

A lot of issues here. I have a lot of z-wave devices. Espacially the robbshop dimmers and switches seem to dissapear of the mesh. Only when I disconnect the power they reconnect again. Also the last days, my z-wave devices seem to time out. They actually do work, but with much delay. Also I have an Acara humidity sensor that stopped working, even a battery change did not help. Same goes for an neo coolcam pir. It flashes detection, but homey app tells me no motion detection for the last 12 hours.

Please athom, try to fix this… with 70 devices connected, my wife is going nuts…

Please athom, try to fix this

Please use the support form, Athom does not read all posts.

The same problem here, non of my fibaro-devices work anymore. Can’t even add them again…
After every firmware-update there are issues with Fibaro.

I always restart Homey again after an update. That can solve the weirdest issues.

I’v allready done this a couple times.
But doesn’t help for me.

Have booted several times now and yet many of my devices are not working as expected. Checked the timestamp also but that’s correct, haven’t changed the power wire though, but it sounds really strange that the power causes this…

But will probably try that tomorrow, will let the z-wave network get another chance of setting itself up before…

For the ones that have similar issues as myself, what homey hardware are you running on? Just thinking of it could be something with that?

I also have recurrent problems with Homey : frequent disconnections, several losses of connections with Fibaro devices (Zwave), having to reboot the system several times (that dont heal the problem)…
Homey bridge is unstable, indeed!

There’s a big difference between Homey bridge and Homey Pro. This topic is about firmware version 8.0.6 of Homey PRO

I rebooted the devices (ie took the circuit breaker to restart hardwired devices) seems to have done the trick. Rebooted homey a bunch of times.

Don’t trust it yet, but seems to work now