Both will rule out HomeKit Controller as a Homey Cloud app.

Thx Robert, I will add that info to the wiki.

Not to be a pain, but that should be
…local wifi device access …
imho.
Wifi is only used for internet access afaik.

Not to be a pain, but that should be
…local wifi device access …
imho.

That’s correct (which still rules out all HomeKit-enabled devices).

Thank you for the clarification @Peter_Kawa & @robertklep. I was hoping I could expose the Busch&Jaeger Free@home lightswitches via HomeBridge on HomeyCloud but apparently I can only do that with HomeyPro.

No one knows why Athom hasn’t implemented a Homekit solution yet. It seems logical to me the Homey cloud should have that integration.
For the Homey cloud, Athom aims at manufacturers to build integrations for their products…

But someone asked about this for tonights’ Q & A.
So go watch it😉

Of course an Athom integration for Homey pro would be nice, but developers can create / have created apps for the Pro. But that’s completely voluntarily.
I know there’s a Homekit experimental option build-in, but I don’t know if that is usable in any way.

No one knows why Athom hasn’t implemented a Homekit solution yet.

They have, for Homey Pro (like you say). It’s experimental because they don’t want to be bothered by questions about it, it was written in an afternoon even though at the time two more complete HomeKit implementations were already available as app. My guess is that it looks nice to the outside world that they can claim that Homey (Pro) has HomeKit support.

It seems logical to me the Homey cloud should have that integration.

HomeKit only works locally. I think the Bridge doesn’t have enough processing power to handle it (either a full protocol implementation or acting as a sort-of HomeKit proxy).

Check & thanks for explaining Robert. I know Rule One: “Thy should not assume”… but I have sinned. I assumed the Apple thing is connected online one way or another.

I don’t get it why Athom wants prospects to believe the “Pro” integrates with Homekit while it seems not a very serious option & still “experimental”
Or does it work fine, Robert? No Homekit stuff lying around here…

It’s not a Homey

I am also happy to test!

Hi I have eve room sensor, this is only work HomeKit, can I add to controller? I want to use sensor datas in homey. If I want to add Homekit controller say no find sensor device. thx

Hi there, I have the qingping air monitor lite paired to HomeKit Controller. The pairing took some time but now it works good. Nice job the RealLink

What i noticed is when de homekit connection beween homey and Qingping is lost it will not re-connect. I have to remove device from homey and paired again. Can the homekit controller re-connect automatically?

Out of curiosity, is this app still be actively developed? There hasn’t been any updates for a while.

@TheRealLink Can you please have a look to the following?:

Sine a few weeks the data of 2 vars of the QingPing app are not updated anymore. This is for PM2.5 and PM10. 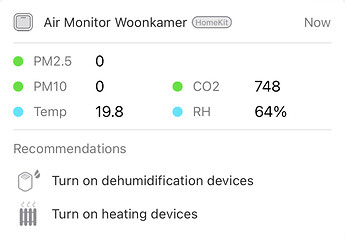 When I look in the HomeKit Controller App these values are correct and updated.

It looks like that the HomeKit Controller app is sending the data to the wrong var of the QinPing app.

if i try to add my aquara g2h camera i become the message „no new devices found“.

I am trying to add my Fibaro Plug to the Homey Homekit Controller. The plug is paired with the iOS Home App and is controllable. The Homey HomeKit Controller finds it but keeps asking me for the pin eventhough I know for sure I am entereing the correct Homekit Setup Code.

I am trying to add my Fibaro Plug to the Homey Homekit Controller. The plug is paired with the iOS Home App and is controllable.

Thank you very much, that worked! Real shame it doesnt show the current power and energy like it does in iOS home and Fibaro.

Just to be Shure, both are on homey or one is an iPhone app?

Good afternoon, I have installed this app and have tried to add the Heatmiser NeoHub which is Homekit compatible, after removing the bridge from Homekit itself, however any of the chosen options provides nothing, I’d expect it to show in either Sensor or Bridge. Would love to see this integrated as Athom dropped development on the Heatmiser App, and have just announced removal of IFTTT which is my latest way of controlling. Happy to test if required and it can be done.