My Homey eats all of the memory

For a while now i notice that the memory Homey is using is going up and up.

Finally other Apps are complaining “spawn enodem”.
I had to google first to find out what that means - running out of memory.

But soon after it’s too late - only Pull The Plug brings it back to life.
Then it starts from the beginning.

I changed the power supply to a good one used for my smartphone and PTP for 25 minutes.
But no change.

Restarting Homey every x hours helps, too.
Once it did a restart on its own.

Here are some screenshots to show the situation.

When i saw the last screenshot i remembered that on Jan. 8th. i updated Homey to 8.1.1.
But it seams also that the problem started even earlier.

Can you advice me please what to do next?
Sending a support request to Homey Support?

Yes. Or disable some apps (start with the Philips Hue app) and see if that solves it.

Same here
Did ask Athom support.
Gave me a solution. But didn’t try it yet… 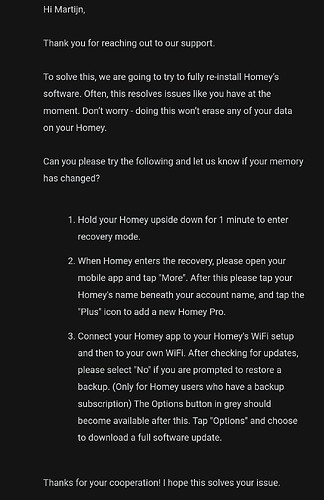 Only app we both have is LEDring collection

Hmm now that you mention it, my Homey was unresponsive this morning…

(Homey becoming unresponsive it something that happens regularly for me, especially when I’m working on an app and very regularly running homey app run, but that wasn’t really the case this morning). I don’t have the LEDring Collection app installed.

Yeah after a lot of app development I do a restart. Because that eats memory

FWIW, this is what my memory graph looks like: a sudden rise from about 130MB to 330MB.

Athom recommended the same what @martijnpoppen described but the update to Homey 8.1.2 solved the problem, too.
Athom said, it could be a problem with my zigbee network.

@Jogi_Bear that would make sense as my zigbee network is crashing a lot.

Athom said, it could be a problem with my zigbee network.

When I was facing similar problem, I was using trigger eg. “Temperature changed”, “Power changed” for Zigbee devices. After I removed/replaced it with rather time based condition, never had this issue again. Also “…has become more/less” works ,but I have feelings that it gets skipped when eg. you put condition 10C but it jump from 9C to 35C in one shot, or you specify 100W as limit and the power changed to 4000W it was somehow not reliable for me. Please note I have 72 Zig-bee devices… “over the edge”

I’ll give that a try @Sharkys

Ups, sorry, I was checking that 3 years old ticket with Athom I had opened for 1 year with them

- it was as I wrote, but it was caused actually by ZWAVE device - later on I have found out that the device sends way too many traffic compared to other ZWave devices - anyway, switching the triggers helped for me and since that time I’m basically using approach above, despite that the device still is much more active then the others (energy meter) - look on Rx packets. Yet, it could be similar with any other device in connection to those conditions and/or triggers being triggered way too often eg. by crashing (I believe Athom have a memory leak there but I’m not developer) . Good luck with that, hopefully you will find the culprit.