Yes with the AATP program I also signed an NDA so sometimes I can’t tell everything I know. You may have noted that already if you read a lot here.

So there it was, Homey Pro (Early 2023) delivered with a day delay by our national parcel company (Grrrr…) as I am probably not different than most of you. I wanted to see, feel and test!

I am not of the generation of Unboxing video’s, so this is it

in the nice printed black box is on top the booklet with different languages (EN, DE, ES and FR) the instructions, including how to wire and start with the App. TL;DR. I am a Pro…
(Beside that the necessary Safety and Handling info and info about the (upcoming) Certifications)

Homey Pro fits exact in the package and has a protective film on top for the shiny top. under the Homey is an USB-C to USB-C cable and a small USB-C Power Adapter

I got instructions from Athom to use a new Homey Mobile App also in alpha test* for the initial setup. As that App also is in development I tested the rest of Homey Pro from the Web App and with the current Stable v6.11 App.

The initial Setup was petty smooth, 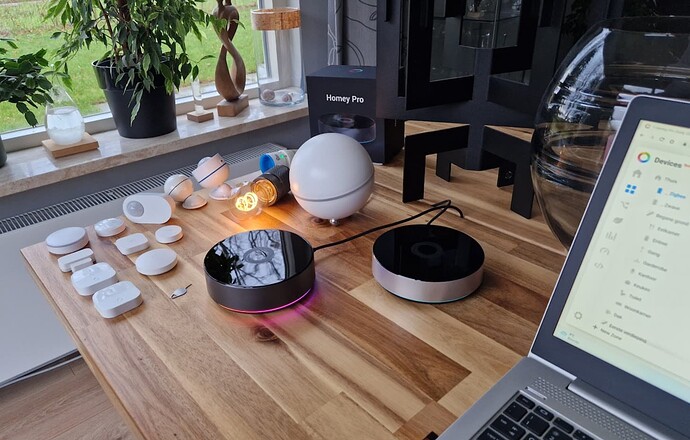 I grabbed a couple of spare devices that where lying around and started testing.

The Disappointing part
Once setup and working from the WebApp or the old Mobile App… It is just a Homey.
It is Homey as if you setup a Homey (cloud) or have a Homey (Pro) 2016-2019, almost everything is there and only someone familiar with the differences can see it. (Yes, Speech and Sound are missing as expected and the specs in settings - general are different from the other Homey’s)
Where it looks like the Homey (Cloud) as it misses some settings this one has no Subscription and already has Advanced Flows …

The Complex part
Although we see approximately the same size device (radius) as the original Homey (Pro), only a few mm higher than the Homey Bridge and after setup see most of the same functionality as before a lot has changed. The original SOM (System on a Module) is replaced by a complete different Raspberry Pi Compute module and many other internal components are changed.
As it isn’t possible to run the SDK 2 Apps, I needed to install my Own PaperTrails App and a SDK3 fork of the NEO App from CLI to test the devices you see on the table.

The new Homey Pro is running a Firmware version v10.0.0-rc.## where the other Homey Pro’s are now on v8.1.2-rc.4. Some developers already found that getting crash reports from the Homey’s from Athom Developers.

These two Firmwares are highly comparable, except for the announced changes (Speech, Speaker etc.)
But beside the hardware also the, lets call it “fundament” of Homey’s software is updated. It is like a different Operating system! That brings me to:

Developing - RUN
Where a developer with Homey Apps was part of his time waiting on uploading his Homey App to his Homey (Pro) on the LAN or Homey connected to a USB port just to see it crash immediately, Athom changed that for the Homey Cloud. The Apps are Run in a container on the developers workstation when developing for cloud.
Running a Homey App when developing with a Homey Pro Early 2023 now also requires Docker installed and are run local on the developer workstation.
These containers startup very fast, This speeds up app testing considerably.

The Mobile App
The new mobile App is also still in development, you will probably recognize the mosts of the things with just a fresh new look. On the other hand I have seen some things move to other places. (Like where you select your Homey or have certain settings or info. just more logical if you now think of it)

As it is still in development I am not going deep into that as things still can change.
This was already shown in the December Blog: 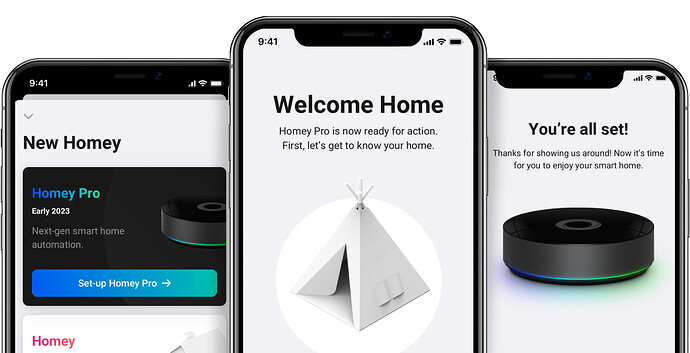 This is also the place where you can start the new USB recovery. (not yet tested)
And although you don’t see the label “Advanced Flow” there, it is included and working on the new Homey Pro 2023!

Further testing
I found and reported several things to Athom, some will be fixed in the new Homey App, others have to be fixed in the Homey Core or in the WebApp or Developer Site.

As you can see in the photo above I also grabbed my spare Homey and am going to setup a couple of Z-Wave, Zigbee, KAKU and other devices. Trying to create a Backup and see if I can restore it on my New Homey without issues. Report the results to Athom and probably switch back to the old Homey to test over again.

FYI, I am certainly not going to test that with my what I call Production Homey where I have a SLA with my wife. That one isn’t touched until I am confident that all things we rely on will work. Definitely as I have to find my ~80 Zigbee devices to (re-)pair.

Thanks for this great preview! I must be quite high on the order list, so this makes me even more anxious about the new Pro. 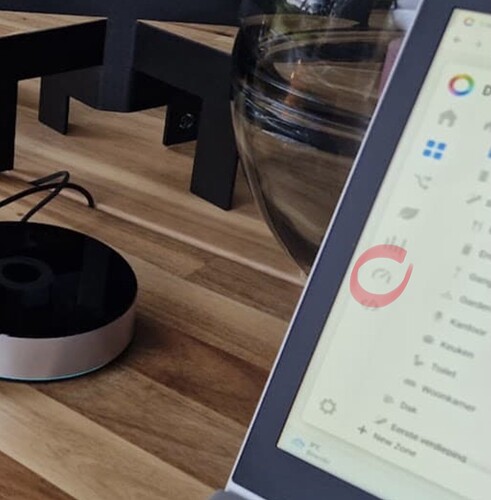 Sherlock Holmes of the Netherlands !

Looks rather similar to this:

It is the same icon as was “leaked” in one of the AMA"s on Youtube. That hinted to a dashboard.
That would be such a nice surprise…!

Very nice Geurt,
I’m very curious about this statement, as Emile wrote we can still drive the led ring using flows, just only apps cannot control it anylonger “by themselves”.
The first two apps use Then flow cards for led effects, the 3rd should add new screensavers

Will never be supported/won’t work on Homey Pro (Early 2023):

If I understood it correctly we will be able to trigger time-limited animations, but not set any screensavers. I.e. to have the LEDring showing Heimdalls alarm states (armed/partially armed) you need to retrigger an animation every x minutes.
It would have been nice to have a bunch of screensavers to select between (the once in the current firmware are too few).

They did this with a reason that was mentioned in the AMA, that reason being that screensavers could show for example a red ring and thus people thinking Homey having a red ring of death and thus contacting Athom support for no other reason than having to change the screensaver.
And with the Manager ledring not being there it will just error out, like already happens with apps still using the microphone.

But yes more screensavers would be nice, i believe they also said they wanted to offer more options for this.

This can’t be true, can it?

Because of these people we now have to do without these great apps?

Apparently after all…Red Ring = Homey has died. But I think Homey users are smarter, as Athom assumes. Keep your old Pro, it can do everything the new one can’t, or never will.

Absolutely, the old Pro wil not go into the garbage. I will take my time to move things from the working pro to the new Pro. And maybe i run into things that indeed are not able with the new pro. And as a bonus the extra pro will solve some problems with devices that were to far away from a Homey.

Would it be possible to replace the Raspberry Pi compute module with another with more Ram and storage?

I don’t think it will be that easy. The Raspi module will be integrated and soldered into the Homey board. I’ll have a look at it when I get a new Pro, though. I agree with you though. If the new Homey had been available for €499 with double the memory, I would have ordered it immediately.

Keep your old Pro, it can do everything the new one can’t, or never will.

Well… Not connecting that much Zigbee devices, nust to name one thing…

Emile hinted that it could be possible to exchange the RAM modulde for a larger one in the AMA about the new Homey Pro 2023. But we will only be sure if someone really tried it…

It is just a compute module 4, that you’ll need to swap in its entirety, not just the ram chips, so no soldering is required, so in theorie you can swap it out, but as they mentioned in the AMA: “it will work, but we won’t guarantee that it will keep working in the future”

Exact on time to upgrade as you are ~ half way of your warranty period.
But maybe someone else has one lying around?

I asked Geurt on purpose, while he, if he would be so kind, can actually install those apps and see what happens in real life.
The theory, and what Emile stated (you can control the led ring with flows, but apps can’t) are a bit contradictory.