update: both sensors are working properly. both are routed through Ikea lamps, with either 2 routers or 1. Lux keeps getting updated on change and movement on movement ;-).

Last 5 days, same thing every day - all devices turn to ? and none of my zigbee devices work. Need to either wait for a random length of time and they start working again, or reset Homey. Different manufacturers etc.Only started happening recently as well. Very odd. 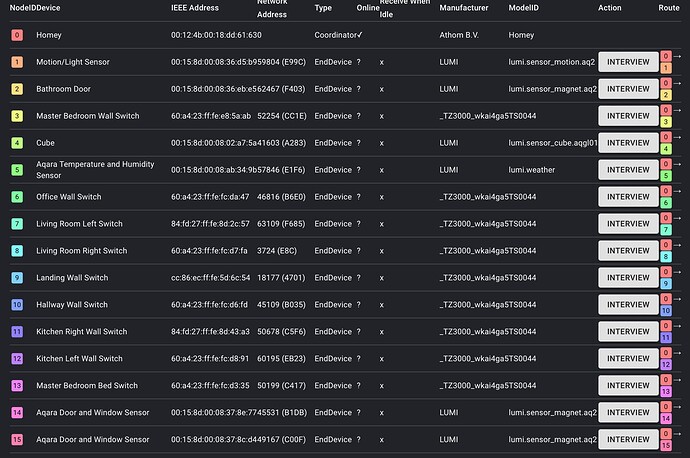 I think you also need extra Router devices for a more stable Zigbee Network. You now only have end-devices.

If you mean ? in the Online collumn, that is normal. Problem would be ? in the Route (even not necessarily). Anyway, way too many battery operated device, buy Zigbee powered device or Zigbee router, like power socket, powered light etc. Take a look on IKEA offer for example. But in your case, I would first start with reset of the network and add first routers (think for the future) and then battery operated devices.

Cheers both, will get a powered zigbee device and see if that helps.

“a powered zigbee device” is not enough, you’ll probably need at least 5 to get a reasonably stable network.

I assume the Hue bridge and Hue lights don’t count towards this (although not connected direct to Homey) there’s over 60 of those!

That’s correct. Only devices shown on the developer page are part of Homey’s Zigbee network.

Hi,
I have experianced the same with my Homey Pro (2019) with Aqara movement and temperature sensors working only a few days after installation into Homey Pro, so I moved them over to my cottage where I have a pure Aqara system. After installing the sensors into the Aqara Hub in my cottage, They have worked fine for a long time now. I therefor think it might be something wrong with the Aqara Homey app and not the Aqara hardware devices. In my Homey pro system I have several zigbee repeaters and electric Powered zigbee devices.

Even if Homey itself is the reason for your problems, it’s very likely not the app but the core Zigbee implementation, and the Aqara app developer cannot fix that.

Hi,
Thank you for your answer.
I assume you or someone has investigated around some vendors product flaws and know about coexisting problems as a fact and not an assumption? I am asking because I am and I assume most Homey Pro users Are using Homey with a lot of different Vendor products.
If I now understand you correctly you do not recommend using Aqara products with Homey Pro if also using a lot of other vendor products? Correct? If so, should there be a warning in the installation text, informing users about potential interoperability issues?
If so does this issue also apply for other vendor products?

By the way, there Are a lot of WiFi signals from neighbours Network received in our cottage. So not only Apples and oranges, also some Apples and apples.

Some people have issues with Aqara devices combined with IKEA or Osram devices, but a lot of people don’t.

Zigbee devices that stop responding isn’t limited to just Aqara devices, it also happens with other brands. But again, only for some people, not for a lot of others.

My guess is that Homey’s Zigbee implementation just isn’t very good, or it cannot deal with certain situations.

Hi again,
Thank you for your honest opinion. Do you think that the zigbee implementation will be anything better in the new upcomingHomey Pro 2023?

Do you think that the zigbee implementation will be anything better in the new upcomingHomey Pro 2023?

The Zigbee hardware of the new Homey Pro will certainly be better. If Athom’s software that interacts with that hardware will be better, nobody knows (except Athom).

I can only share my experiences. I also had permanent problems with my Aqara sensors freezing in the Homey Zigbee.
Since I switched to the Conbee stick with sensors, I haven’t had a single failure.

My Aqara issues started with some innr SP220 plugs. Their connection got weired and all clients behind got disconnected.
Exchanged the plugs back to SP120 and wall fine again.

My experience is: No Homey issue, but issue with router devices, perhaps a combination of router from some brands.

No Homey issue, but issue with router devices, perhaps a combination of router from some brands.

The brands that people typically have Aqara issues with (IKEA, Innr) all work just fine for me (outside of Homey), so it’s a difficult situation

Zigbee instructions “keep close to Homey” is the worst advice ever.
Connect everything where it supposed to be and leave the Homey on it’s place.
First the routers and after the end devices
I need to redo everything again in the house after testing to connect all routers next to the Homey and spread around and than connected end devices and spread around (all (routers (Osram and Ledvance) refuse to hop, they want the direct connection even with 2 floors and multiple routers in between.
I knew it would go wrong but I flashed everything with Conbee and I wanted to confirm what I expected.
P.s. also checked Aqara firmwares, cube, motion, lux, door sensor, temp humidity all don’t have firmware updates available (borrowed Aqara hub, chinese mainland, just the Bluetooth temp thingies had an update)

I can confirm, been testing that recently on several Aqara and Xiaomi devices with Aqara E1 HUB - the only device with update was Aqara TVOC sensor (there is bug in the fw causing intermittent disconnection issues with this particular device)