No, when I control them from HDL app, there is no update in Homey.

@horakmar Pushed a new version to test now that reverts back to the previous version on the curtain driver.

I have found the same as @horakmar . #1.08 is working for the curtains and the floorheater.

I’ve pushed a new feature release to test now that add support for DLP Panels as temperature sensors. The panels are very complex, so I haven’t found any other direct use for them (like reading/setting the button status), but as temperature sensors they are pretty useful. Be aware that they don’t respond to update requests, so temperature are sent from the devices at irregular intervals.

Hello Andreas. Thank you for your development!! Which DLP Panels are supported? I have Granite panel - HDL-MPTL4C.48. It is not DLP, right?

I think this should act the same way. Could you find a device ID for it? (can’t find it in the Excel-sheet defDeviceType)

I have 3 DLP panels and 1 Touch DLP panel, and they all went straight in to Homey now

This is very good news. All my DLP’s were found. And again, thank you for all improvements you provides us with.

Wow, this was god news, almost like Christmas. Really appreciated @AndreasL
Included all my DLP’s.

If it is possible to in the future to only include the heating state change between Normal, Away, Night, Timer etc that would be of great interest since I then can close down the Iridium server, only used to change heating when away

Alternativ setup: You can use the VTermo app to control heating in the room, and use UVS to set home/away status. Flows can then set thermostat temperature based on that status. If you have Tibber, you can include the VTermo thermostats in there to have it control the night time lowering of temperature with a lot more smartness. As mentioned, I haven’t found any great ways of getting more info from the DLPs except temp, so I wouldn’t rely on that happening.

No doubt, Christmas is here. Have done some tests. The dimming delay function is working like explained in the documentation. This adds that “little” extra!!!

Thanks for the suggestion with VThermo. I just have to find out how to use UVs on my setup…

Maybe if I send to Logic controller only in some way and use Homey to only sniffer for UVs from the Logic controller? As mentioned earlier my system/Homey responds to many UVs not existing, when I program a button to set a UV high (sent to ID of Homey) 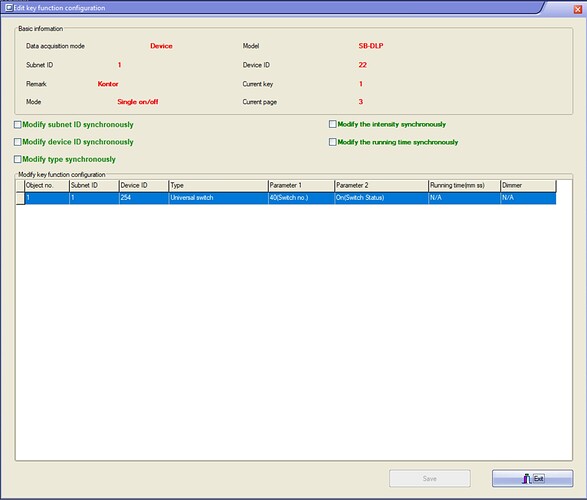 Based on earlier communication related to sending UV from DLP to Homey you wrote:

I use direct adressing to the UV on Homey as HDL device, not as broadscast.

In my example ID of Homey app is 254 is the above how you do it with direct adressing to a UV40 switch in Homey ?

This works when I push the DLP button.

The challenge however is that when I set it up like this the UV40 switch goes to ON state without me pressing the DLP button, and I have checked and check again if there is something else on the bus that sets a UV40 to on…

The other way, starting a HDL logic in the logic controller by setting an UV to ON state from Homey, seems to work. So I will try the DLP heating state change by does this later today, as suggested by @AndreasL

I can’t see any logical reason for what you are explaining happening. This leaves you with trying to figure out which device is sending the UVS state out on the bus. Knowing the protocol and some programming languages, I would do that with JS/Node or Python, e.g. with the library you can find here: GitHub - eyesoft/pybuspro: Python Buspro API. If you don’t know programming, maybe Wireshark could help you out? Another idea would be to download my sourcecode on GitHub, find the file called drivers/universal-switch/driver.js, add the following line of code between line 11 and 12 (make a new line):

You need to install node.js on your machine and run the command npm in the root of your downloaded source code to install dependencies. After that you should be able to run homey app run and it will install this version on your Homey and you can see the log output in the terminal, with all signals that are received by the UVS driver. After you are done, end it with CRTL+C and install the app again from the App Store.

I can well underdstand your frustration.

I’m using id 1 as device ID for Homey. I have noticed that UV254 is used by sensors for indicating if the brightnes sensor is enabled/disabled. I really don’t know if selecting id 254 for Homey may cause confusion?? I chose to have Homey as the first device rather than one before the last one possible.

Thanks for you suggestions @AndreasL
I have to study this more and see if I am able to do this. I do not have much experience with programming, more than some old skills in C++

Another option I know of is the Command Test in the HDL Bus Pro Software, but if I understand your suggestion I would then enable to log only commands that are sent to Homey?

@Fredrik_Meyer-Lampe If you set it up the way I explained, it would only log (and show you) what is received by the Homey from the HDL-bus and is recognised as a Universal Switch command.

Thanks for your support @AndreasL. I will try to study it further .

Motion detection and turning on lights is working very fast in some rooms, and very slow in other rooms. As far as I can see everything is set up the same way.
Anyone else experiencing the same and have suggestions for solution ?
With only HDL it was super fast.