The philips hue motion sensor is capable of detecting temperature, but is there any way to have homey relay that information to google assistant, so that it is possible to ask google what the temperature in the room is?

Now when I ask google, it says that the sensor is not configured.

Go to GH. In GH this device will be imported.voila

Trying to follow the guide you linked to, but getting this error:

Okay I figured out how to make a virtual sensor and get t working, but when I update my devices in GH its still not showing up.

Do you have the synchronize button turned on? Settings/Google Assistant/ Synchronise to Google.

Yes synchronization is turned on, it has synced all other devices, but no virtual device.

And in GH you have added Homey as works with Google?

Did you use a Virtual Device or a Device Capabilities app virtual device?
For the latter, this works with google home: 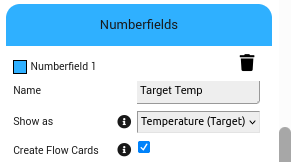 I don’t know if “target temperature” (num field 1) is necessary, this is just a virtual thermostat which shows up in Ghome.

This is the app I used to create the device:

And here is the virtual device listen in homey:

I have “Sync with google” activated: 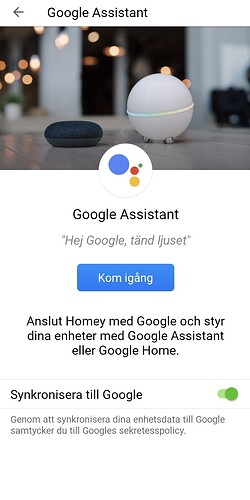 Still google doesnt see the virtual devices after I tell it to sync.
But it does see everything else inside Homey.

That type of virtual device also needs to present itself as a ‘thermostat’, but you only use the measure_temperature capability 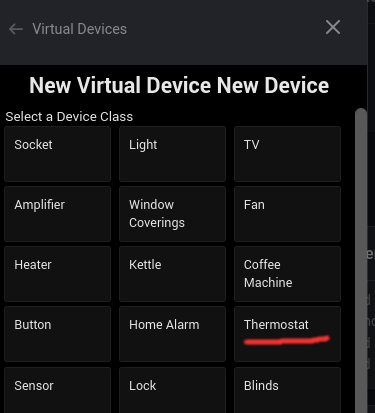 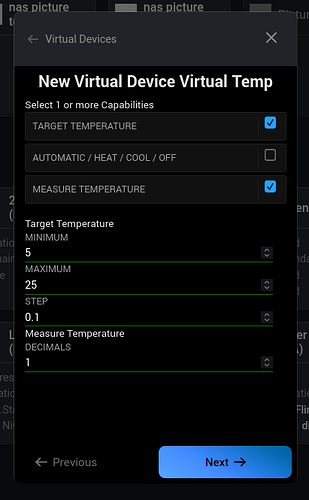 Disadvantage: it won’t show the measured temperature on the mobile app tiles. Somehow Athom has set a fixed status indicator for thermostat devices, with the Target Temperature’s value.

But, it shows the measured temperature in Ghome, and you can ask “what is the temperature of [device name]”

Okay, created a new device with “Thermostat” instead.
Do I need a flow for it, or can I just import it to GH?

You’ll have to feed it with values, using flows indeed.
I guess the virtual thermostat without any value yet, gets not yet imported in GH.

I tried a few different things, and I think I got it working, the flow looks like this now:

However when I ask GH about the temperature, and when I tried first time after making this flow, it told me that the sensor is turned off.
I then clicked on the virtual sensor and set a temperature “20C” and it now tells me that the temp is set to 20C and that the actual temperature is 21.5.

However, the actual temperature when I click on the Hue motion sensor shows 22.1C not 21.5, so not really sure what is going on there?

Also do I have to set a temperature manually like in this example, for GH to understand that the sensor is on?

The new “Thermostat” device that I created, has not been updated at all since I created it, and neither has the first device that I showed earlier. It says, last updated 2 days ago, that is right about when I created it.

The real sensor is updating every few minutes.

I thought that the problem was in my flow, so I set it to update every 2 minute instead, but after waiting for 10 minutes, it still doesnt update the sensor, unless I update it manually from the flow.

This is what the virtual sensor is showing: 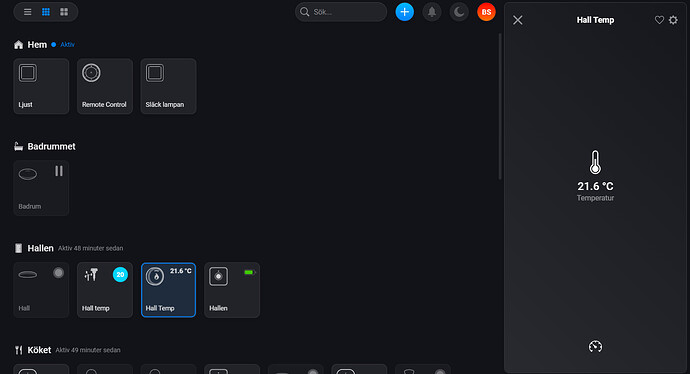 And the real sensor is showing this: 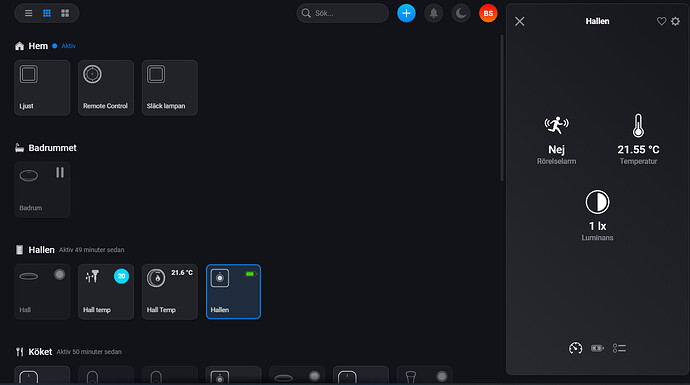 Also, I am expecting google to say that its 21.6 like the virtual sensor is showing, but it still claims that its 21.5, so it seems that GH is not updating the sensor values for some reason either?

I apologize for these many messages, but I figured it out.
I took the hall sensor and put it next to the window, and it went down to 12.80C.
It seems that it takes the real sensor 15 minutes to update, so even if I set the flow to 2 minutes, it doesnt update before the sensor has new information.

As for google reporting 21.5C I think it has to do with google only supporting down to .5 degrees instead of .01?

So now the only question remains, does google have to report what the sensor is set to?

For instance, when I ask it what the temp in the hallway is, it says, the temp is set to 20C and the current temp is 13C.

I would prefer to only know the current temp, without it telling me what its set to. 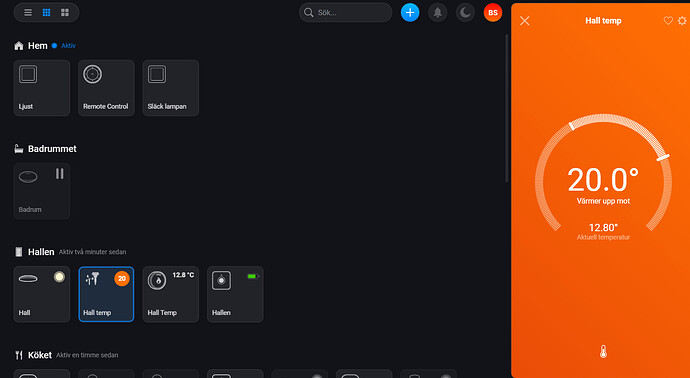 It only triggers once when the temp went from below -10 to something above -10.

Thanks, changed now to “When the temperature has changed” trigger.
Any ideas about my other question?