Thanks Danee, Athom Support is getting busy just by my requests. I’ve asked them to support this.

Would it still be possible to get the motion detection from the Netamo within a separate flow and have that trigger the Heimdall alarm? As a work-around until they get this fixed someday?

If there is a flowcard that fires when a Netatmo detecs motion you could map it to a virtual motion sensor, see the Heimdall faq and the instructions

Well, I bought a Netatmo Welcome today to experiment if that works well as a combined motion detector / camera. I do worry a bit that it works with comparing images, so if a car with headlights drives by and lights up the room I would get a false “motion detection”, but we’ll see. If it’s no good for that it’s still a nice camera, but in that case I need motion detectors as well and leaning towards the Aqara.

Unfortunately the Homey Store was out of stock, Always want to support Athom first, but then they do need stock.

Lol, @DaneedeKruyff, Heimdall is excellent, with the events it is raising including the tags I can use the Google TTS app to have all my google home devices say where the intruder is.

This is perfect! My Galaxy alarm went bleeping, but you had to go to the panel in order to see what triggered.

Now you can hear what triggered the alarm throughout the house and you get a quick idea of where the intruder is heading. Fantastic. Still only have a couple of sensors to play with, but this is great.

Just got a reply from Athom support:

“Unfortunately Homey does not support S2 Z-Wave security yet.”

That explains why the Aeotec Sensor 7 was registered as unsecured. That is a bit sucky, cause now all of these sensors will be unsecured, but I do have some hope that Homey will implement this eventually.

Though support does not give me the answers I would like (It’s not supported, request it using this form, good idea, we will consider it) they do respond nice and quickly.

Glad you like Heimdall, please leave a rating/review in the app store

What I did not know is that you also can’t start the Homey app locally. I thought being on the same LAN the app and homey should be able to connect, but they can’t.

This should work, at least that’s what Athom has always said. If it doesn’t work, please let Athom know (because for others it also doesn’t work, so more bug reports hopefully means faster fixes): https://support.athom.com/hc/en-us/requests/new

Lol, that would be my fifth support request for this week. Hope I don’t get some kind of permanent ban :-). But I will do.

If Homey disconnects from internet you can program the alarm to go off, problem is that your sirens probably would be jammed.

Found a Homey issue yesterday when the internet provider had a big outage. I removed most of my switches and use voice control with google mini’s. But…, no internet, no google mini. What I did not know is that you also can’t start the Homey app locally. I thought being on the same LAN the app and homey should be able to connect, but they can’t. Homey does still seem to work, but need to be aware that in a alarm situation with Internet down I can’t use the app so need a keyfob or switch to disarm the alarm as well.

Please do file another ticket for this since it’s still a bad issue. Ahtom confirmed this on 2 September.

Is there still no local access? (V2) Questions & Help

Aaaargh… I’m glad RobbShop has great service because unfortunately I have to return a lot to them lately. Ordered the Aeotec Sensor 7, that did not work, probably cause Homey does not implement S2 yet. Wanted to buy the Fibaro sensors instead, but they look almost exactly the same and the Fibaro can not be screwed, it needs to be glued and that always comes off. So I also got the Vision Security Siren and that worked great, the app also showed the door/window sensor so ordered that. But too bad…, after binding it tells me “Invalid_CommandClass_Command_Class_Sensor_Binary”.

Finding the right sensors is hard. The Neo’s don’t have tamper alarm, guess I only have the Aqara’s to try now. I almost had everything Z-Wave based, tried a Aeotec multisensory 6 and that seems to work great.

Made the support query, it is a bad issue, but I can live with it a bit. Homey still works without internet, you only cannot control or configure it with the app anymore. Bought a keyfob as well for the main alarm features and will use two buttons to set a “full light” / “all lights off” scene so for that few hours a year the internet breaks down I can still control most functions.

Would rather have them implement backup and restore first, or better Z-Wave / ZigBee support.

U can use Aquara Vibration Sensor as glasbreak detector…

But you have to place them on the glass? I have a lot of glass windows, currently there is one glass break detector on the ceiling in the center of 3 glass windows. If any of them break the sensor will listen to the sound of glass breaking and fire an alert. I think there will hardly be any vibration at that point to pick up.

How is the glass break sensor connected? When it’s wired it might just be an open/close contact which may make it possible to connect it to a Fibaro Universal Binary Sensor.

Hmmm…, good tip. That could just work. It is also a wireless sensor, but it can be configured to have a red LED active when it is on alert. If I could have that LED somehow fire up the binary sensor… That will cause me double the amount of battery, so I’m shelving this as a “if no other alternative”.

If it has a led you could replace that/attach an optocoupler to it and connect that to a Xiaomi Aqara Window Door Sensor, will be the easiest solution I think.

(Your glass break sensor, is it this one: https://www.security.honeywell.com/product-repository/5853 ?)

No, my glass break sensor is different: 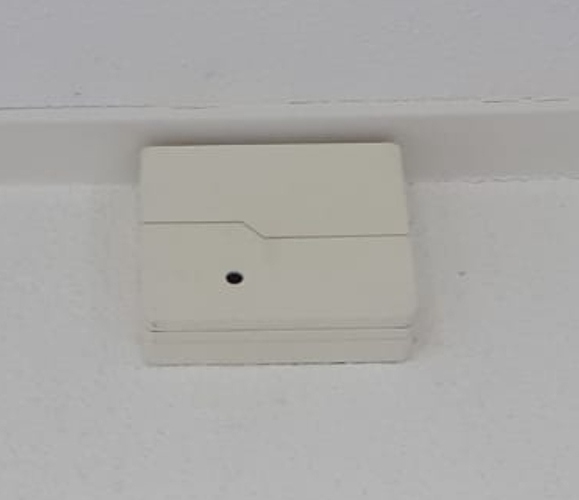 Also about 13 years old so probably a obsolete / discontinued model as well. I don’t know how long these things last as well, tested 3 of them and they do still work, but I’d prefer a brand new homey compatible sensor if they exist.