Can I use Homey as a hub for devices to add to Apple HomeKit?

I have everything in Apple HomeKit, and I intend to keep it that way. There are a lot of devices that aren’t supported natively in HomeKit, many of them based on Z-Wave, and I was wondering if I could purchase a Homey Pro, add a bunch of light switches/pucks, thermostats etc to it, and have them work in Apple HomeKit? Essentially making the Homey just a slave to HomeKit. I have no need of the Homey service, just the technical integration. Is this possible, or am I required to use the Homey app to use any of the gadgets I add? I did some googling, but all official Homey-docs and videos only show examples by using the Homey app, and searching this forum for “Homekit” shows a lot of posts in foreign languages.

I suspect that you will be beholden to apples walled garden

Sorry, I’m not American or English, so I don’t really understand what you just said…

: being under obligation for a favor or gift : [INDEBTED]
Will I be in debt to Apple Inc?

Beg pardon, I’ll rephrase. Apple have a well documented walled garden approach to apps and services. They don’t let anyone in unless they make money from it. It’s one of their least charming features. What you are attempting sounds like it would bypass their business model. Bearing in mind that the Homey app is free to download and there is no subscription tied to it that benefits apple

In that case I guess you find their push for standardizing and supporting Thread pretty weird?
Regardless of Apple’s stance, I have a Raspberry Pi running Homebridge, which lets me support a lot of natively unsupported devices (bulbs, TV’s, etc) which are connected to my Homebridge via Ethernet/Wifi.

What I need is something to support wall-mounted wired smart switches. I don’t know much about Zigbee, Z-Wave etc, but I can see that the most commonly used wall switch style for my area (GIRA55 in Norway) is made by Elko, which do have smart switches with support for Z-Wave for their own (poor) smart-system - and I can see that Homey support most of those devices.
I don’t know if these Elko-devices need an Elko-hub to be able to talk with Homey, but regardless of that, I was hoping I could “forward” those devices via Homey into HomeKit, kind of like how Philips Hue bulbs are “forwarded” to HomeKit via the Hue hub.

If I own a Homey Pro and add a supported Z-Wave wall switch to it, will it show up and be programmable in HomeKit? That’s basically all I need to know, I think.

No official support as there is something with legal 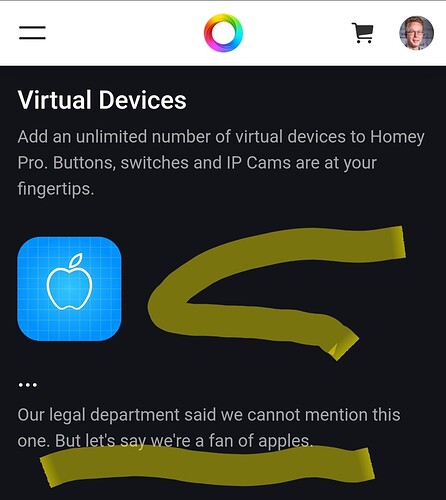 But I don’t use Apple much so can’t say much over what really is missing.

Is the Homeykit app what you are looking for?

In that case I guess you find their push for standardizing and supporting Thread pretty weird?

They don’t want to support multiple formats, they will be aiming to monetize it somehow

Which “multiple formats” do you mean?

No official support as there is something with legal

Well, yes and no: if you want to sell devices with HomeKit support, you have to pass all kinds of certifications, with associated costs. I guess Athom didn’t want to pay for all that, so now they’re shipping Homey with a “… experiment” that seems to go against Apple’s requirements for commercial use of HomeKit, and therefore are keeping things “quiet”.

Apple never aimed at creating a hub that supports all these protocols, although it supports the mainstream protocols like WiFi and BLE (which is what HomeKit is based on, and now there’s Thread as third protocol).

Homey will probably soon support Matter, and therefore it will be possible to add devices from homey to homekit. Athom BV is a member of the CSA

Homey will probably soon support Matter, and therefore it will be possible to add devices from homey to homekit.

It’s already possible to add devices from Homey to HomeKit, you don’t need Matter for that. As for Homey supporting Matter: we’ll see, I guess.

Not if you have homey cloud… And why should athom be a member of the alliance if they don’t want to support it. They have to support it to keep being a interesting solution for people

Not if you have homey cloud…

I don’t really see how Matter would solve that problem, given that it would require a local hub that speaks both Matter and HomeKit, and such a hub doesn’t exist. Don’t get your hopes up that Homey Bridge will do this, because its hardware is too limited.

And why should athom be a member of the alliance if they don’t want to support it.

My guess is that Athom became a member when it was still called “Zigbee Alliance”.

They have to support it to keep being a interesting solution for people.

The only way Homey (Pro) can be a reasonably useful Matter solution is through the use of other hubs (like IKEA’s, or Apple’s, or Hue’s).

both homey pro and homey bridge can get matter support as “bridges” - Philiphs hue bridge will get this. aswell as other “cloud only” hubs like ikea, smartthings etc

Again, Homey Bridge doesn’t have enough power for this. Homey Pro could act as a Zigbee/Z-Wave/etc-to-Matter bridge, but that’s unrelated to HomeKit support.

Philiphs hue bridge will get this. aswell as other “cloud only” hubs like ikea, smartthings etc

I don’t know about the Smartthings hub, but both Philips and IKEA devices are also border routers because they actually support Thread (which Homey doesn’t, and also will not with the current hardware).

announcement of a keynote now, days after the public release of Matter, hmm…

@Stiian Nobody seems to have really answered your question and I can’t really understand why as it’s really simple: yes. You can add a load of z wave and zigbee devices connected to Homey and either the built-in ‘experimental’ support for HomeKit or the HomeyKit app will present those devices seamlessly to HomeKit where they can be controlled, automated etc pretty near exactly as if they were native HomeKit. I have had >100 z wave and zigbee devices exposed by my Homey pro to HomeKit and controlled from there by Home app, Siri on HomePods etc. for years with no issues.

Although the built in support is experimental it’s very solid. The HomeyKit app is a more feature-rich option and is also extremely solid and well-maintained.