I have a similar issue. Although it seems the app is working (I can see al my network devices go online and offline, and status is updated correctly), my existing flows do not work anymore.
To test, I made this simple flow that works if I manually run it, but does not do anything if I take a network device (i.e. my phone) offline. 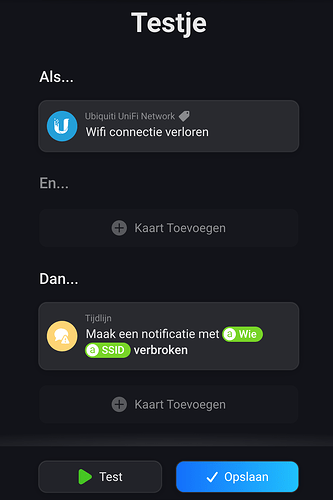 In my previous post I indicated that Application Flows no longer work. They will no longer be selectable in the next version.

You can only select a flow card when you add a device.

When you call a flow card in Homey too often, the memory usage increases. In certain situations there are many disconect and connect events, so that too many flow cards are called in succession.

We can activate this again later when Homey has solved the bug, but it will take a while because we cannot make a good example for Homey.

Tomorrow I will release a new test version with a few improvements.

I tested the new version and made a separate flow for it. 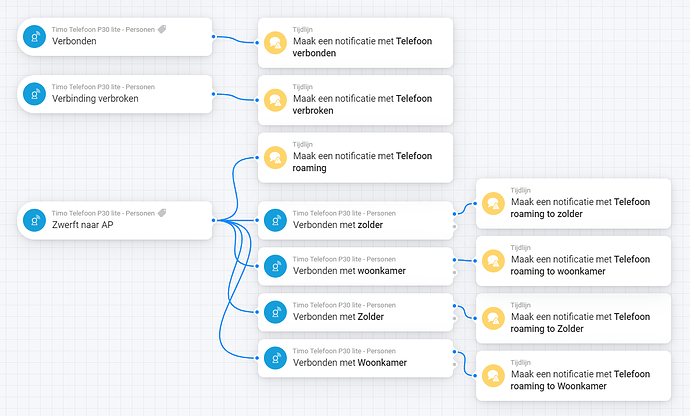 My conclusion is that connection en disconnect are functioning properly, but the roaming (zwerven) does not trigger, therefore the “and” card are also not working.
The status form the “device” is changing accordingly, it show the right AP, but for a unknown reason it does not trigger the flow (if).

Hope this feedback helps. If you want more input, feel free to ask.

I tested the issue again and could not make it happen again.

At the risk of asking a stupid question, I have installed the UniFi Network app and the Connection Status is showing Disconnected. It the settings page there is already entered a Host, Username and Password and that it uses port 443. Something presumably needs changed, what might that be?
Trying to pair a device just brings up “Unknown Error”

Using the Experimental version v2.3.8 now for more than a week. Sometimes it misses a disconnect of a WiFi connected device (phone). When restarting the app, the device is updated to its correct state “disconnected”.

I’m very happy with the recovery of this app till so far. Thanks for all your work!

Do you mean that the IF-card wasn’t triggered, or that the device in Homey wasn’t showing the correct state?

Do you use a valid user & password, In my case I use
site ID= default
pull methode & Interval = interval&websocket)
interval=15

Both, the device shows connected while it isn’t, and the IF card is not triggered

Feature request: I was wondering if it would be possible for this app to support blocking/unblocking individual devices? For example to block wifi access for the kids on demand from a flow?

No I hadn’t as wasn’t prompted to in the install process and the Getting started guide doesn’t say to. Have just created a local access only account for Homey and will try that

I think incorrect credentials or can’t connect to unifi server

Feature request can been created on GitLab, because i am in an happy flow i have add this to the next test version.

Next week i will release an new version with setting to enable application flows again. On some devices there are no memory leaks ( i think small wifi deployments of stable wifi devices ).

Hello, for several weeks now I have had the problem that the app (v2.3.6) no longer connects to my Cloud key Gen2 plus (v3.0.13).
I get to see in the debug that it is StatusCodeError 401 - Unauthorised.

After some testing, the local unifi account no longer appeared to be working (I can no longer login locally with it in the Cloud key dashboard either. The user does have sufficient permissions.

When I change the user’s username within the Cloud key dashboard, for example from homey to homey2, it immediately works again. After about 10 hours, I have the same problem again that the account can no longer log in.

Anyone have any idea what this could be? The lockout seems to be specific to username. For my local homebridge which also uses a local unifi account this does not happen.

I changed the password to remove symbols, just have letters and numbers now, same problem. Homey is connected to the UDRs 2,4GHz wifi. What might prevent the app from connecting to UniFi? I have the Homey Admin roles as UniFi OS and Network, both View only

No crashes so far.
And 5 iPhones roaming-, disconnecting- and connecting messages are fast and useful (4 APs)
Memory usage steady up and down between 20.5MB and 21MB

Just did a quick test with 2.3.9 and device block/unblock seems to work great, thanks a lot!