I have been doing a bit of research, but could not find the proper answer (or simply am not searching well enough

Recently bought a house with some legacy Jung automation (2008) I am replacing it all with Homey compatible devices. Therefore, the old dimmers in the central cabinet (meterkast in Dutch) are replaced by Fibaro dimmers on the din rail.

I now have some KAKU wall dimmers which I want to place troughout the house. My question is: how to properly link the dim level of the KAKU dimmer with the fibaro dimmer. I could write tons of flows for each dim level, but I was wondering/hoping that a more clever solution is possible?

PS: if there are any suggestions for homey compatible devices which could replace my setup, that is helpfull too. For example the same brand which avoids the need for programming via Homey.
I coudl try and put the KAKu dimmer module on the dinrail, but doesnt seem right. Moreover, I am looking for a wireless dimmer which can “talk/pair” with a dimmer on the dinrail. Preferrably zigbee/zwave so there is feedback.

Any solution that will require Homey as a go-between will be suboptimal, because you need flows to take the dimmer input and translate that to a dimmer output. It’s going to be very difficult to make that go smoothly (if at all, because if you trigger a flow too often, Homey may step in and disable it).

Thanks Robert. That’s clear.
Any suggestions on brands that provide both wall mounted swithes/dimmers as well as modules which can be mounted at the switchboard?

My other thoughts: just create about 3 levels of dimming and toggle through these by moving the dimmer. Or get multi-button switches for the 3 levels of dim.

Last option would be to put a KAKU dimmer switch in the central cabinet, which could serve as receiver for the KAKU dimmer in the living room. This receiver would then act as the switch, connected to the Fibaro dimmer which is there (I do would like to keep that Fibaro, for the feedback to homey). Created a scheme. But seems quite excessive: 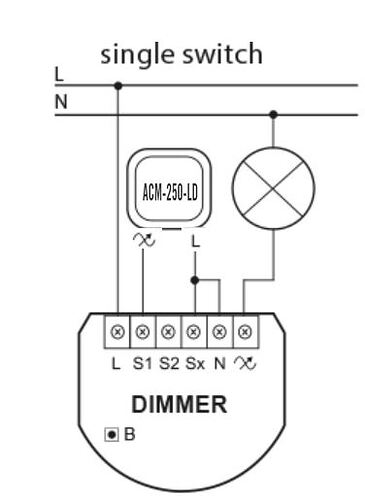 I doubt that the Fibaro dimmer will accept a dimmer output as its switch input.

Ideally, you need a dimmer that can be associated directly with the Fibaro dimmer over Z-Wave to control it. Or a Z-Wave dimmer with a built-in turn knob (like Ecodim or ROBB Smart).

Hi Robert,
Thanks for your insights.

After some playing around, I did manage to get it going.

I created a Logic which contains the dim level and subsequently a separate flow to dim the Fibaro to the logic dim level.

Then a flow which synchronizes the logic dim level to the position of the kaku dimmer and then starts the separate flow (dimming the fibaro to the dim level). Works like a charm.

By creating a separate flow to be started, it creates just that bit of delay for the logic to be adjusted, without having to put in a delay of 1 sec.

Maybe its of use to anyone