Reduce the number of Node.js modules to use less memory

While starting to add my devices to Homey I was told by support that I am near using up all the memory on the Homey Pro.

I have been removing Apps I can do without.

But noticed that the Athom Philips Hue uses 65mb of Ram, this is noted as being above the Athom target of 30mb, with a notification to

“Reduce the number of Node.js modules to use less memory.“

Anyone know and can explain to a Homey noob how to do this?

Only the app developer can do that. In the case of Hue that’s Athom so you will need to contact Athom support about that one.

If the Athom hue supported Hue scenes, then I could remove 80 odd lightbulbs.

I really don’t need Athom to control every one of the 14 lights in my lounge, all I need is Lounge Read scene, or lounge TV Watching Scene.

I would have thought that would reduce its loading?

Is there an alternate Hue Hub controller that I can use that doesn’t distress Homey?

After some more research, the longer the Hue App runs for the more memory it consumes.

The Hue app had been crashing a lot, several times a day.

Deleting all apps that are not critical has reduced the Hue app and Homey from crashing several times a day to once every couple of days.

Just checking the Hue App stats and it was using 72mb a restart of the Hue App reduced memory to let than 25mb.

So maybe I just have the Hue App restart every 12-24 hrs?

I’ll try it and see if things improve.

Noticed free memory went from 1% to 10% restarting the Hue App, so maybe onto something here .

maybe I just have the Hue App restart every 12-24 hrs?

You can do something like this, to auto restart apps when they exceed a certain level of memory usage.
I used this app Device Capabilities (Sorry, you’ll need an extra app if you haven’t got this one already) 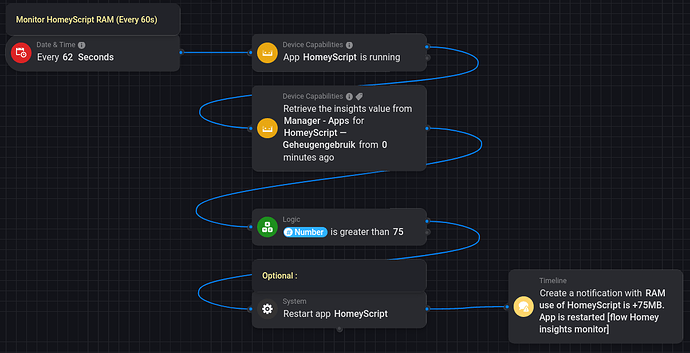 Homeyscript can grow in memory usage when I fire too many scripts in a certain time. Homey becomes unreachable at those times.
While I have no critical scripts, just restarting the app at those moments works perfect for me.

(BTW, funny how Athom suggests to remove other apps than Hue, while Hue app acts odd and needs some TLC

The highest I’ve seen it get to is 75mb.

The switches and sensors need close control of.

If Homey did room/scene control then it would reduce the devices from 80 bulbs to 13 rooms, surely that would save memory.

I am looking for Homey to do home automation not just a room automation, I keep running into the limits of Homey and I have not yet finished adding devices.

I was hoping to use Homey as the main controller, but looks like it needs help from other Home automation devices.

May look at running a Node Red on an M1 Mac, with MQTT at the top level, and use Homey for the bits it is really good at and MQTTZigbee for zigbee devices, and maybe Hubitat for zwave.

All hubs have issues, I have yet to find one that is great at all elements, Homey has a great interface, love the advanced flows and Insights has so much potential.

Is the Philips Hue Bridge able to react to external HTTP commands (sorry if I don’t use technical terms, but I’m not a programmer and not an IT expert and I don’t own a Hue Bridge)?