Exiting! Dashboard? New Homey?
How can they make me wait for a whole week now…?! 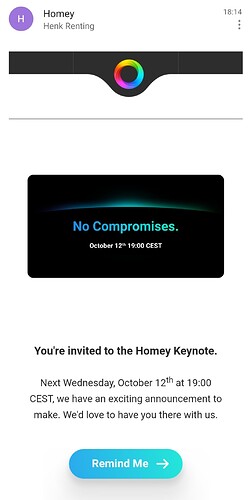 Indeed, soooo hoping for a real pro device. Or (even better) software that can be installed on own hardware!

But, it might aswell be just a little update to the webapp

What software then and why would that be more likely?
Don’t think they would organize a keynote for just a firmware update. I hope for something more…

I didn’t say it was likely, just that I would like that even better. (I was thinking of any Linux box where you can install homey on)

I don’t think Athom would drop the revenue of selling hardware. And software writing will be much more difficult if it’s not for their own dedicated hardware…

Homey is getting old and slow, we deserve new hardware to unlock its full potential!

Maybe some kind of Homey subscription will be needed (which is fine by me for a reasonable fee like <€5/month).

I’d rather pay a one time fee, similar to the price of the current Homey Pro. And I actually like it’s form factor.
But for the rest: I would love it!

Exciting stuff. There are a few possibilities for what this news could be.

New hardware: perhaps to support the new matter standard that, if I’m not mistaken was officially released this week.

Dashboard/web app: this was teased (by mistake) while presenting advanced flows. A few other things on the web platform has also been “under development” for a while like the energy tab.

I hope there will be no monthly subscriptions. I would be happy to pay a one time fee for new functionality like with the advanced flow, but I have already payed a fair amount of money for the device with no mention of subscription costs at the time, so it would not be fair to introduce monthly costs to existing users now in my opinion.

Perhaps they will announce they solved the irritating Philips Hue pop-up that has been spamming this conmunity forum for weeks.

Hehe, that’s a chicken/egg issue. Lots of users complained about the lack of info of issues f.i. And others now get annoyed by the improved issue info. But I agree, it should save your choice when you hit the X and shouldn’t come back.

The company has to generate cashflow somehow. Not selling Pro’s for quite a while, and the Homey bridge does not show it’s potential yet ( I was stunned it had no ethernet connector…)

I filed an issue. Was told it was ‘transferred to the other team, thus ticket closed’ and it still irritates you, me and other users.

For me it means I am hardly present and active on this forum anymore. Athom has outgrown me.

Yeah I get that. And with new products and new functionality they are free to get payed however they want.
I mostly meant that the current functionality, with my current hardware needs to still function without further costs. As that was the deal when I bought the product.

Anyway, like I said, I would prefer to pay a one time charge for new functionality, for instance a dashboard, rather then pay a monthly subscription. Income for Athom either way.

Since the event is called “no compromises” they will probably make homey cloud more like homey pro and maybe differentiate with another subscription for “pro” users.
And it is probably not a coincident that they are announcing this keynote now, days after Matter relased to the public…

Homey is getting old and slow, we deserve new hardware to unlock its full potential!

Yes new 'Pro" hardware is appricated! Would like to update my early 2016 model for something ready for the future. Buying an older Pro(²) and missing out on matter would be a bummer. My CPU and Memory are in coninues ballancing act.

Maybe “does it really matter?” would have been a good tagline for the event

I think new hardware will be announced. But for me, getting rid of the annoying Philips Hue notification on this forum would be the best news they could announce