Yes, it was rolled out today. I hope this resolves everything

I have a brand new 200L Connected. I had some issues pairing it with MyUplink, but that was solved using an old iOS device (Currently it’s impossible to pair using iOS >15.x and iPadOS > 15.6)

However - after adding it to Homey I get that I “accumulated heat loss” of 22419.78 kWh (!)
It was turned on for the first time yesterday… Can I reset this value somehow?

You know, nuclear reactors should be filled with heavy water, not spring water.

Jokes aside, I will add a maintenance action to the next version so you can reset it.

…and I have reproduced your error. Turns out that I introduced this problem on July 20th 12:14 PM. This means that everyone that has connected the tank to homey since then has the same problem, it’s just that you’re the first to mention it

… which means that I need to add corrective measures to all the unlucky users to have connected their tank between then and now.

A new version will be available later this evening.

Fixed in version 1.7.11. The test version will probably not pass Athoms review before Monday though.

Thanks for the quick fix!

Now I have an other question - This looks a bit strange: 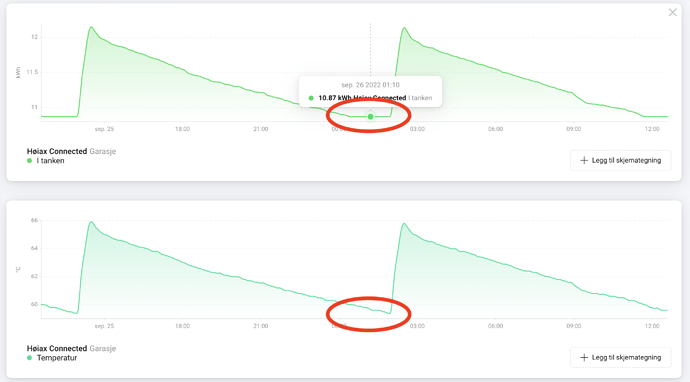 For some reason the stored energy “In tank” does not go down below 10.87kWh even though the temperature is dropping.
It was like that yesterday and the same thing happens today.

For some reason the stored energy “In tank” does not go down below 10.87kWh

Indeed, but I cannot explain exactly this value because I am just exposing the value that myuplink is returning. Høiax has not made public their exact formula for calculating this value, but at least it is a very rough estimate based on a couple of parameters you have configured:

I see now that the value does indeed come from MyUplink… Thx for checking!

No one has actually been using the tank since it was installed so water inlet temp. should not be an issue.

10.87kWh does seem to be some sort of magic number for my tank at least: 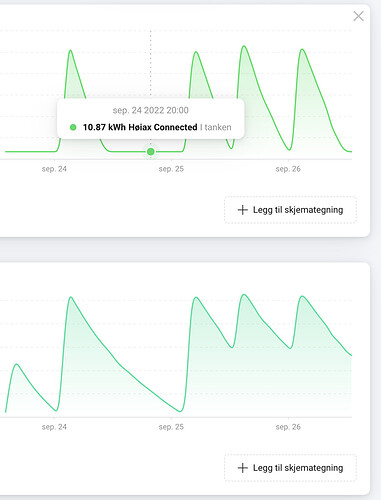 Changing the power level between low, medium and maximum does not appear to do anything - It keeps running at max regardless of setting.

I can change the power level in MyUplink, but it takes quite long to reflect back into Homey (I assume due to polling limitations?)

I deliberately made the app with the idea that if you choose to connect it to Homey then Homey will be the ONLY controller of the water heater. Thus, I did not add a lot of polling to make sure that the internal state of the homey app is in synch with the myuplink state. So… if the state of the homey app is Off and you have turned the heater on with myuplink then the app will not transmit the power to the tank before you turn it on in the app.

Of course, I can add a lot of polling if you wish, but in my personal opinion, this is a waste of bandwidth and internet resources.

I completely respect that decision! (Polling every 5 minutes(?) like it is now also quite ok for what it is I think)

I just tried changing the the power level to see what would happen.

Yes, but you also said that

If homey thinks it is off, then the change in power level is not transmitted before it is turned on again in the app.
Then the question is what turned it on on the myuplink side. If you did not do it then maybe myuplink did it by itself. Can you confirm that the controlling unit of the tank is set to Homey (or external if you see it from myuplink?)
If myuplink is selected as the controlling unit then I see a need for more polling. I can add more polling for these cases though as it makes more sense when external changes are expected.

OK - Currently I have it configured as “Independent (Spotprice)” in Homey and “Spotprice” in MyUplink. (Yes - I did see your warning that I should rather use “Piggy Bank” to control it. That is however a bit to “involved” for me at the moment)
I wanted to start with the default Høiax functionality to see how far that gets me.
Does configuring it this way mean that I can’t change anything from Homey? (That would certainly make sense…)

You’re not the first to state that, so I am trying to simplify the process as much as possible, it will be a bit easier within the next two weeks I hope.

Does configuring it this way mean that I can’t change anything from Homey?

You can change things from Homey still, the question is how long the change sticks

For spotprice I think changing the temperature will stick (as a base temperature) as myuplink only have delta-temperatures for high and low price points.
Some other values can still be useful as well, if you input the room-temperature to the homey app this will improve the estimates done by the tank itself about how much energy it has.