I"d be happy to support any developer who takes on this (re)development!

I’m the original developer of this app but handed over development quite some time ago. Although I dont use Homey anymore I still enjoy developing apps for Homey. I could probably rebuilt the app to SDK3, at least for the WiFi devices part as this is still the same code I written myself. I havent looked at the support of the gateway and Zigbee subdevices though. It seems this doesnt work anymore anyway and doesnt have to be migrated to SDK3?!?.

But here is the deal, and I’m gonna ask for a lot here so pay attention. I still develop some apps but since I dont use Homey myself I do not intend to whip out the money for a Homey Pro 2023. It would still help me to further develop my apps though as my Homey 2016 is getting sluggish. So I’m looking for some win-win situation here. If you can find enough users of this app to contribute the money for a nice and shiny Homey Pro 2023 I will update the app to SDK3.

Here’s the reply from Athom:

The current developer of this community app is Maxmudjon Payziyev. We have recently tried to contact this developer ourselves, but have not been able to contact him yet, unfortunately.
The developer is responsible for the app and is the only one who can update the app to SDKv3. This update is necessary to get the app working for Homey Pro (Early 2023). If there are developers who want to take over the app, for example if it is suspected that the developer no longer wants or is unable to maintain the app, this request can only be made to the current developer. We cannot transfer ownership of the app to another developer.
When a new developer from the community reports and would like to make a similar app for Xiaomi, this new app can be added to the Homey app store.

It would be great of you could do that, @phuturist. I do mean financial support, but 399 euro is a lot, so raising that amount would definately have to be a community effort as you surely will understand.
You current Homey does support SDKv3, so it could be developed on your old Homey as well. Although I do understand that a Homry 2023 would be better.

Such a pity that @Maxmudjon doesn’t reply anymore to transfer this app, as this does affect many users. So after all we’re the ones having problems now (when oir new Homey arrives), instead of Athom with whom he had a disagreement…

Disagreement? To my understanding he did not succeed publishing his app because an infringement of the rules (to my understanding). He never pursued this while Phuturist wasn’t intereste in the app anymore and was more than willing to render to Maxmudjon. 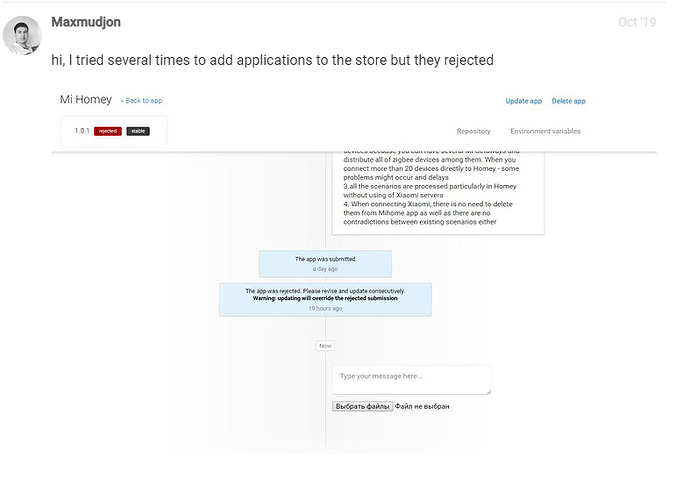 Anyhow, did someone try to reach out via Telegram?

Anyhow, did someone try to reach out via Telegram?

Not by Telegram, but other ways.
Have sent him a message just now, hope he responds.
He has seen Telegram recently the app says…

He never pursued this while Phuturist wasn’t intereste in the app anymore and was more than willing to render to Maxmudjon.

Please stick to facts. I offered to hand offer development to @Maxmudjon as his app was offering similar functionality as mine and Athom didnt want two similar apps in the store. By handing over ownership of my app he could integrate the two which he actually did.

If you can find enough users

Just joking… I still appreciate what you are doing, still your Yeelight LAN working well

Btw, just realized I’m running for Philips downlight your version of the app - v 2.13.4, now I’m wondering what has happened that time - I think you agreed to split it into two parts … or transferred it to Maxmudjon ? Still using Gateway itself with “Max” implementation even I see you have removed the integration… 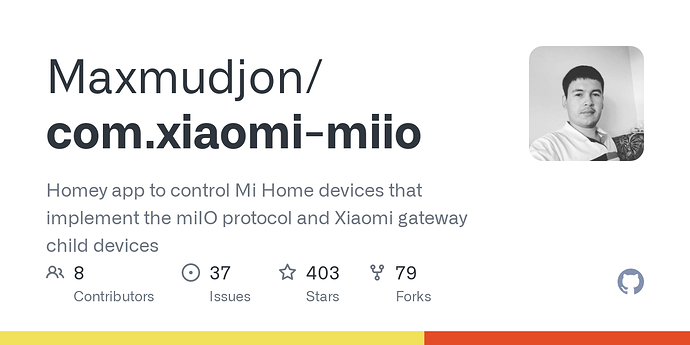 So probably bounty thread would be the only option…do you still have any accesses to the app itself or it has been fully handovered ?

Sorry, I see your updates in the meantime. Still some questions remains…btw, there is nowadays also HCS option for “the rest” which Athom have problem with.

Please stick to facts. I offered to hand offer development to @Maxmudjon as his app was offering similar functionality as mine and Athom didnt want two similar apps in the store. By handing over ownership of my app he could integrate the two which he actually did

OK, isn’t that the same thing?

So probably bounty thread would be the only option…do you still have any accesses to the app itself or it has been fully handovered ?

The code until release 3.0.5 (current release is 3.0.8) is publically available on Github in the repo you link to. That should be enough for anyone with enough time and incentive to do the upgrade.

OK, isn’t that the same thing?

In my book, not being interested anymore is not the same thing as looking for a solution that benefits the users of the app. But you could see it differently ofcourse.

OK, understood. Anyhow, it was never my intention to offend of course.

The code until release 3.0.5 (current release is 3.0.8) is publically available on Github in the repo you link to. That should be enough for anyone with enough time and incentive to do the upgrade.

Could this be a migration project for you, @Arie_J_Godschalk? Since you already have quite some experience in upgrading apps to SDK3, I hope it would’t be too much effort. A lot of users of this app would be very thankfull!
I’d be happy to support you once more. And be happy to test as well and help you out wherever I can…

Could this be a migration project for you, @Arie_J_Godschalk?

Even I know Arie is doing great job on SDK3 migrations, I’m not sure this is kind “cup of tea” / type of app he would be keen to migrate (not seeing device app in his portfolio), but let’s see…however we would need not just migration but also someone maintaining it, which I know @Phuturist is very much capable of, just I’m not sure if that would mean that functionality of both apps would be again merged ? I’m currently using Xiaomi Mi Home and 2nd Mi Homey… also 2nd question is whether you still have any way to contact @Maxmudjon , because with new app id(s), that would be a pain.

Asking theoretically only because even I’m happy to donate, not really 399Eur unfortunately - yet combination of both (merging app / maintaining both app + having ability to transfer it to yourself for maintenance and development) would be visible motivation for others to consider donation as well - then we can start eventually bounty thread to see real interest.

Asking theoretically only because even I’m happy to donate, not really 399Eur unfortunately - yet combination of both (merging app / maintaining both app + having ability to transfer it to yourself for maintenance and development) would be visible motivation for others to consider donation as well - then we can start eventually bounty thread to see real interest.

That’s a chicken and egg dilemma. But trust me, if I really see some effort into getting a bounty even close to me getting my hands on a Homey Pro 2023 I’ll do anything within my skills to keep developing and maintaining the app again. I’d have to see what the best approach would be concering the two apps but I’m sure I could work that out with the user base.

But I must admit, I have no faith at all in raising money even close to buying a Homey Pro 2023. I have been developing apps for Homey for years now (from day 1, that’s why I have an old Homey now) and 99% of the users only come here if something doesnt work for them. I only received a handful of donations form the apps I developed (which have now been mostly handed over to other developers). So I actually dont see this happening, but as said, surprise me and I will do everything within my skills …

I d offer €25, but… Only if I know it ll get the update (doesn’t have to be ready) as soon as they ship the homey 2023s. If it’s not clear, I ll just have to migrate them directly to homey 2023 and I won’t be migrating all my devices back and forth. 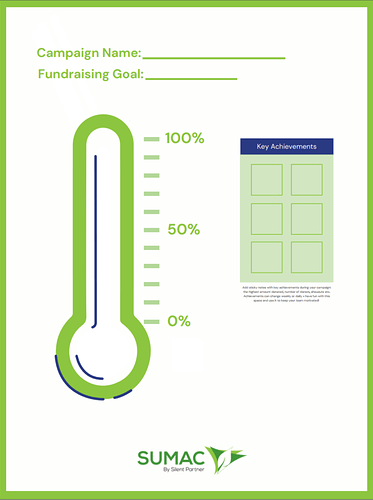 This free fundraising thermometer widget allows you to customize your thermometer goal, color, and size. Try it now!

Should we start something similar, or would the Homey Pro 2023 with it’s satellites make the Mi Home App redundant?

I’d be happy to contribute to such a fund raise, @Jan_Peeters!

When you’re speaking of satellites; you are referring to using an “old” Homey Pro for this purpose? By using @Arie_J_Godschalk’s Homesh controller and satellite apps? Somewhere in the future on older Homey Pro’s SDK2 might be deprecated too, so that would mean updating the white ball would come to an end, if you want to keep using Mi Home…
(Not sure if you can install devices with it’s apps on a Homesh Satellite and use them as regular devices on the Homesh Controller)

Using a Homey Bridge as satellite would mean you still have to install the Mi Homey app on Homey Pro 2023, which would still require an SDK3 update.
The Mi Home app isn’t suitable for Homey Bridge unfortunately, so you can’t use a Bridge as a separate Homey environment.

I myself, am specifically interested in the Mi Home app because of the possibility to integrate Aqara gateways with their own child devices. The gateways are connected to the internet.
Thus alowing for a greater distance, avoiding the limitations of Zigbee/Zwave/others.

To my understanding, the Home Pro2023 can make use of the Homey Bridge and use them as bridge or repeater. Thus much in the same manner as my current use of the Aqara gateway.

What is your specific application of the Mi Homey app?

just to be fair…)

Conditions to be fulfilled : Xiaomi Mi Home SDK3 published
ETA : don’t ask for ETA, trust to the community and developers

In case of any disagreements, let me know by PM or by reply to this message.

I pledge €25 as well for including my Xiaomi gateway.

@Jan_Peeters:
The new Homey Pro 2023 can indeed act as a repeater for Zigbee. But in this case it acts like any other 230V powered Zigbee device like a wallplug or lightbulb and integrates in the Zigbee network of Homey Pro 2023.

The way you use your Aqara gateway (same as I do with my Xiaomi gateway), the gateway connects to your current Homey by local (TCP/IP) network instead.

As far as I know that is not supported by the new satellite mode of Homey Pro 2023.

screenshot removed
Maxmudjon reacted and informed that his Homey is dead and therefor the app cannot be maintained / transferred.