Adding Fibaro switch out of range

Hi!
I recently got problems connecting to the Fibaro switch that controls my outside lights at the back of the house. It used to work fine for about a year, but then it could no longer be found. As part of trouble shooting I removed the switch, but now I can’t add it anymore. It’s at the far back of the house, not within range of the Homey controller itself, but within range of the zwave network. Do I really need to undo the wiring, open and dismantle a switch box somewhere in the house nearby the homey controller, to then attach the wires to the switch, just to add it to the zwave network? And then undo and reinstall it again at its final location? Seems like a lot of trouble; hope there is an easier way! Your help is appreciated!

Aren’t you aware of https://support.homey.app/ ? 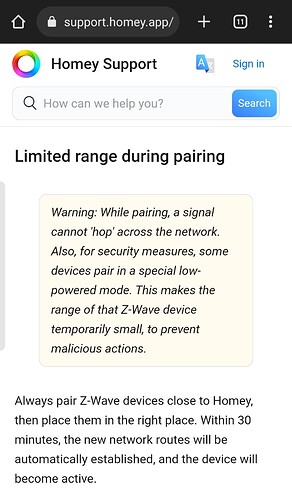 Hint for pairing nearby: Temporary plug Homey in near the fibaro switch, or use an extensioncord / powerbank, so you don’t have to do the wiring stuff.

Thanks Peter,
Thanks for confirming. It just seemed strange that for mains-connected devices you would also need to be in reach of Homey. Anyway, I’ve extended my wifi network with an extender so I now can get the same wifi network (and hence, the Homey) near the switch thats causing the problems, and I managed to re-add the switch. Then moved back the Homey to its old location, and now Transmit_Complete_No_Ack error again. Not sure what is going on, as it used to work in this exact same set-up…
Rgds,
Bart

According to Emile (see “The new Homey Pro - Ask Me Anything” YouTube video), the current Homey Pro should already be able to do NWI (Network Wide Inclusion). According to some users here in the forum, this only works if enough main powered devices are already included. Personally, I still prefer to perform the inclusion in close proximity to the Homey.
Some possibilities why the Fibaro Switch is not working now after one year could be a possible defect of the switch itself, a possible defect of another Z-Wave device or other sources of interference (e.g. defective power supply), aso…

The “Transmit_Complete_No_Ack” error means that there is no connection to the device.
Please try the following:
– Open the Developer Tools website and then the Z-Wave menu
– Search for the Fibaro Switch
– Click on the 3 dots at the end of the row and then click on “Heal”
If a red error message appears and “Unknown” is written in the Route column, then the device is definitely not reachable.

Then perform a PTP. This will rebuild/organize the Z-Wave mesh. It could be that the switch will be reachable again. But give the Z-Wave Mesh at least 1-2 hours time. Then open the Developer Tools website again and test if the switch is reachable now.