Trying to find the error in the Advanced Flow

It has a little red triangle on it - I thought this indicate an error.

I cannot see where the error is in these flows - can anyone else? 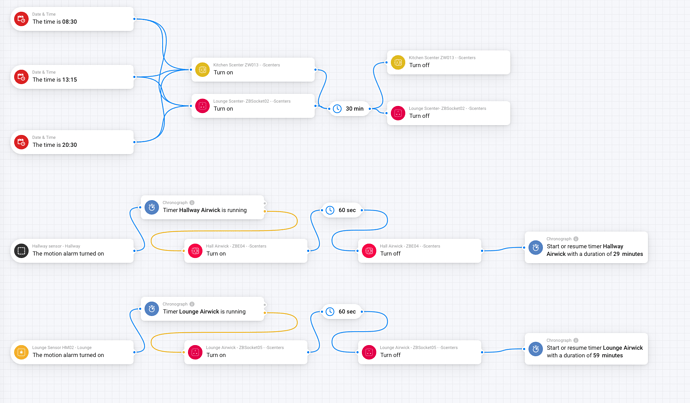 Maybe something with the hallway sensor ?
Because i dont see an icon loaded maybe that app crashed?

Yes, but Odd, the Hue App crashes several times a day, well the Homey does offline 20-30 times a day still trying to work out how to get the Homey stable.

Odd in that only one of the Hue Motion Sensors was offline I have two Hue Hubs each with 40 odd devices mostly bulbs, so odd one sensor was offline and not the others

Disable the Hue app for a day, and see if Homey still goes offline 20 - 30 times a day.
I think it’s related.

I will try it but really hope it is not the issue, I would lose every bulb ~80 and 20+ motion/temp/lux sensors

Otherwise it’s probably your wifi setup. Hue seems to send/receive heaps of data. Maybe QOS helps at first, so Homey can send some bytes in between😉

Are you connecting via Hue hub or are your Hue lamps connected to Homey directly?

I have two Hue Hubs each with 40 odd devices

I run all the iOt stuff, Homey, Hue, Eufy, Netatmo etc etc on its own vlan with its own dedicated 2.4GHz Wi-Fi.

It sits on a 2 tier Ubiquiti network, with 3 APs and the base station covering a 1300sq ft home, you can fry an egg in every room using the Wi-Fi

The Homey is located 3 ft from the base station, direct line of sight.

If there is an issue with the network, Homey is the only one exhibiting issues.

I will, disconnect other connections into Hue, HomeKit and a couple of other things and see if things improve. Hopefully.

If it doesn’t I’ll disconnect Hue hubs from Homey and see if it stabilises Homey.