Somfy RTS sunshades work manually but not in flow

Hi all, I have a strange thing with my Somfy app and RTS sunshades.

I have added the devices. If I press the up/down ‘buttons’ in the app on my iPhone, the shades move. When triggered from a timed flow they don’t move. The flow resets the state to Idle after 30 seconds.
When I test the flow it also does not work. 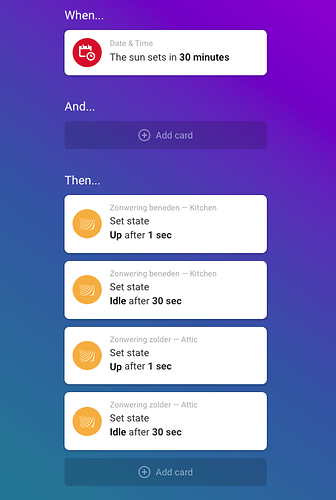 Is it possible to set the dimming level with Somfy? Try that.

Have you tried setting the state of only one shade from the flow?

Indeed as robert says, try to test with only one card in then part. And with that does it get a green

Solved: Sending out commands spaced out in time and not at the same time solved it. I solved it by using 1 second delay between each command.