IMPORTANT: I have been encouraged to create a new topic on this project. Advertising is not intended, but information on the project and to get feedback from the community.

I am a smart home enthusiast and dedicated Homey user with a passion to show that not everything tech should originate from China or the US.

I have selected a European IoT development company as well as an experienced Dutch Homey app developer @Koktail to create the first customizable display device which is also specifically built for the Homey platform.

The idea initially came from my own demand which I quickly realized was like many others in the community: to make all the data from our smart homes available and visible to everyone and everywhere in the household.

Not a dashboard, although this would also be great, but a small versatile screen to show a few but highly relevant data.

You can already today find e.g., sensors with a small screen, but we often have many sensors in the same room or would like to show data from devices in other locations. And data is contextual: different data are often relevant at different times, situations etc.

I also have a LaMetric Time and a Google Nest Hub showing HomeyDash, but they are big, bulky, require power outlet, wifi/cloud etc.

> I need something simple, small, thin, elegant and versatile. Something to potentially put in every room, on the wall besides a switch, on a table or a shelf, blending in without standing out. That’s also what my wife is saying

So, it must be battery powered to place anywhere. It should be slim to stick on the wall. It must be able to communicate directly with Homey without yet another hub. It must be small, yet clear enough to be visible on a distance in bright daylight as well as evening lighting. And it must integrate perfectly with the Homey platform utilizing its connectivity and power of Flows.

That is what we are building. E-ink for power efficiency, slimness and clarity. Zigbee is also power efficient and integrates well with Homey. Imagine the Aqara TVOC sensor with almost double screen area combined with a Philips Hue Dimmer Switch magnetic wall-mount. And the ability to switch between portrait and landscape orientation. We are heavily prototyping now and will have our first field-test in January. If everything goes as planned, the first production series will be available sometime April.

There are many obstacles to overcome. The current global component crisis is imminent. But also, other practical issues, such as balancing battery lifetime (goal is at least 3-6 months with average minute-by-minute updates) and screen performance. Adding an extra color to e-ink increase refreshrate heavily and impact the ability to partial update the screen. Perhaps we will have to go for black/white/greyscale at the current e-ink technology. And a big thing is keeping cost down to make an affordable device. Homey is an expanding community, but still a small market to develop a bespoke device for.

I will update again soon. But in the meantime. Please don’t hesitate to leave any comments. What do you think about the project? What use-cases could you imagine/do you already have for this device?

We are currently working on a template design, where you can choose from 1 to 4 different values (numeric, bolean, enum…) to show on the screen at a time. The design will be fixed (1, 2, 3 or 4 and placement of icon/symbol/suffix, description etc.), though still able to toggle between portrait/landscape and positive/negative.

To fully understand the variety of input, we are looking at different use-cases. It will of course still be possible to mix your own values, but this is helpful in the design phase.
Here’s some use-cases we are considering. Please add more:

I would like to see how may times a specific flow have been run, sofar today. Could be any predefined flow.

I’m thinking about a report function. When you came back home, you could read the report on the device with information:

From my side one additional class of functionality: Audio announcements

Right now i have in my home a “Speaking Homey” in my “office”, but as the home layout is quite complex, the Homey is not hearable from other rooms… So, sometimes the important messages like new snail-mail or washing machine finished may be left unattended. Audio is little bit more “visible” than a message on screen. To make it more hearable - may-be just an audio jack (even without speaker), to connect to external loudspeakers(or audio mixer).
Yeah, know, there are Google-/Amazon-TTS and also messages on phone(s) - tested, to complex, “cloudy” or invisible between other messages.

That means, a speaker ánd a headphone jack + the additional hardware so you don’t forget your laundry? I don’t want to pay extra for those functions. I’d rather see other functions prioritised.

I would like to question further about the design aspect.

Would be nice to be able to see energy values like:
solar panel revenue
power or gas usage of that day/week/month
values from power by the hour app

Hardware and Software development in parallel

Nice to read all use cases! We will certainly include these considerations in the development process of the app.

That means, a speaker ánd a headphone jack + the additional hardware so you don’t forget your laundry? I don’t want to pay extra for those functions. I’d rather see other functions prioritised.

Are You sure, You not pay for it anyway

Yes, it depends, but most modern devkits have the sound built in, so scratch-off may be additional service. Yep, if there is a silicon-level new device, You’re right, then the design may take some effort.

Another theme is the software - of course the sound subsystem needs programming and bug-fixing. But from my personal perspective… in normal conditions, i look at screen, ~10 times per day, but my ears are open 24/7.

What’s about my laundry, then i personally do not have problems, already have some speaking device, announcing additionally about many things, for example snail-mails. 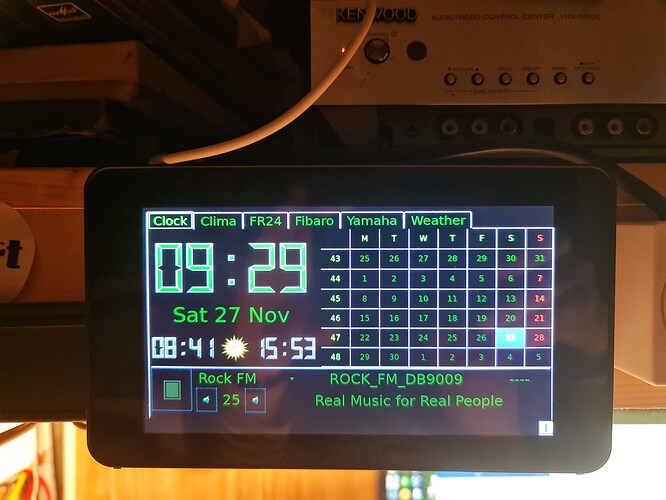 Khmm, yep, this is an old version - from my Fibaro-days.

Battery powered and zigbee (low power protocol) makes a world of difference (and limitations), when you want to broadcast to a screen. Nothing standard here, Unfortunately.

Yeah… know it also from my own project. Even in Z-wave there is no streaming. But there is already something done

Do You have seen an multi-ringtone chime? Just pre-record something on SD-card, and then set parameter to 5(th ringtone - Trauermusik) when mother in law is coming and ringing the bell. Limited, but working.
Ok, another theme, if The Device is goin’ to long and deep sleep and does not listen this period radio at all. Then yep, no real-time announcements possible, and also data is quite … not so real time unless manual refresh/wakeup button.

What about the sonoff display ?

It is a very interesting device, I believe. But something different. Needs fixed power (not battery) which will limit e.g. placement of the device. It has a fixed layout (you can’t decide yourself, what to display) and not (yet?) very integrated with the Homey platform. It’s more a controller than a display device. What do you think?

I will receive it soon so i cant say anything about it ,the plans look good.
But its a switch with an display on it and some sensors.

But can you add it to Homey? For all I know it only supports Sonoff devices or you have to flash it… nobody got time for that

Hi,
very interesting project.
There are some displays using tuya or even homekit and I wondered if it would be possible to connect them to Homey in the future.
E.g. Tuya Smart Home Control Panel Lcd Touch 4 "HD Digital Display APP Tuya Alarm Panel Entsperren Schalter Home Video intercom Controller|Smart Remote Control| - AliExpress

@Thilo I hope so too. It’s very much like the Sonoff NSPanel. Both of them more controllers than customizable displays.