Sure. I call that generic because it is not specific. But it’s great that you couldn’t resist to reproof someone else. Again. Must be a burden to live with such an obsession i think.

Allright, can you just stop with this kind of bull shit answers on this forum please? Get a live and try to be nice. @robertklep is a very awesome member of this community. Is trying to help all of us. Can’t say that about you.

Maybe do some background check next time before you judge. I help a lot but some ppl that only show off on their own expertise and have to blame Athom on every occasion got an urge to (unfunded) comment lots of my (and some other’s ppls) posts. Just like now. Pulls the fun out of being an active and helpful member, i can assure you that.
And yes, instead of beating around the bush and do it sneaky i just say what i find and feel.

For those who doesn’t understand: i draw a line here. Let’s stop nagging and start being useful.
Next off-topic posts will be deleted without further notice. Reactions to this post will also be deleted.That includes posts where we have to make a statement first to go on-topic again after that. If you have any problems with that please feel free to PM me or any other moderator.

My developer page does show zigbee using the routers (ocassionally). Have you tried rebuilding the zigbee network already?

From what I know (also from other sources), the SoC has a 20-device limit, no matter if those are battery-powered or not (there might be a slight variation between controllers, but it’s 20-ish).

I’m sorry, battery powered or not is indeed not relevant.

What I was trying to say, is that the limitations encountered by the TS are most likely caused due to the fact that all his devices are directly connected to Homey. Therefore, the network (and the limitation) is not expanded. Or, as the source you provided states this:

“Definitely not! Example given: the default Zigbee2mqtt CC2531 firmware indeed supports 20 devices connected directly to the coordinator. However, by having routers in your network the network size can be extended.”

I am also faced with the same limitation of 20 zigbee devices:

I hope this product will help to overcome this limitation (material since dependent SOC?)
Do you see another solution?

i use Philips hue bridge for all Philips motion sensors, dresden elektronik strips.
for the rest of motion sensors, innr lamps and hue lamps, I use homey.
each room has now. min. 3 sensors.

first time, that this works how it should 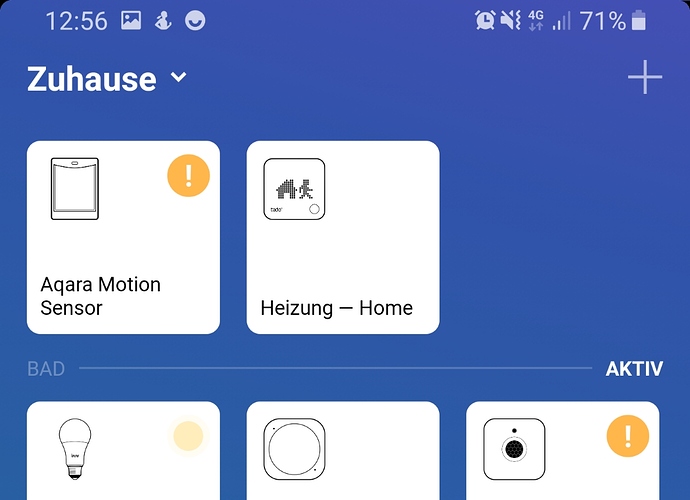 maybe there is a better working solution? but it works for me

maybe this will solve your issues also

Do you have any proper routers? Such as an Ikea or hue light bulb connected directly to Homey? Or a Zigbee smart wall plug connected directly to Homey? The bridges from Hue (for example) are intended to be used as a coördinator, the same as Homey, not as a router. The mesh-network should only have one coördinator, but can have multiple routers. Each router (and the coördinator) can hold up to 20 devices (give or take).

I recognize that I did not think of pairing the HUE bulbs directly to Homey, they are always connected to the HUE bridge. (the functionality and ergonomics are the same?)
The only devices I can use as a router are the IKEA TRADFRI signal repeaters (answer tonight after work;))

OK, I’m curious to see if that has any effect. A good way to test how your zigbee mesh is set up, is checking https://developer.athom.com/
You’ll have to wait a minute, as the mesh-network needs to load in order to show on your screen. You’ll see something like this. This is a screenshot of (a part of) my zigbee mesh.

Result: it works but only for new devices added

i have to appair again all my Xiaomi devices 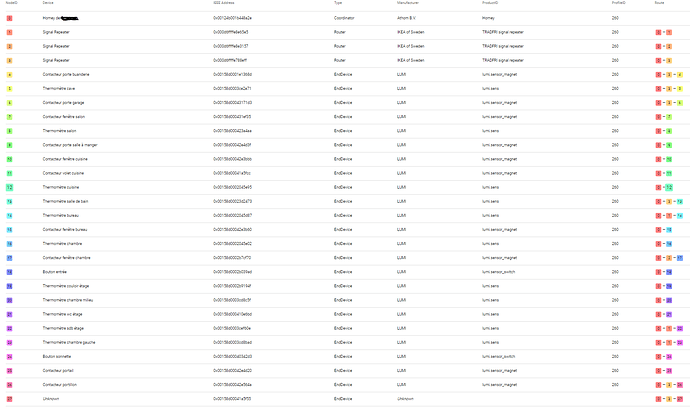 Thank you very much for the insights as I am planning to deploy ZigBee sensors in combination with Heimdall, this is very useful material here.
However because I am new to the community, I would have some questions to raise and I am sorry if it was already addressed in some groups of discussion.
1- Did anyone test what happens when you have a power cut ? Because I guess using extenders you couldn’t really control throughout the mesh network could be an issue. Does it reconfigure correctly ? Any possibility to say the device should act as router or not ?
2- Using devices such as Lamps or sockets acting as extenders is also an issue if you cannot control their functions isn’t it ?
3- What could be recommended as best practice to deal with this type issue, for instance using UPS also for the ZigBee extenders ? Disconnecting the lamps and sockets in a flow activating the surveillance mode ?, etc.
Please could we list somewhere all recommendations to make it more secured ?
Many thanks in advance for your feedbacks

1- if the power of homey is cut then you can no longer control the devices that are paired on it. However, when the power returns, all devices are operational again (with some exceptions)

2- Indeed it is the risk but point number 3 answers

3- I think of your need: connect homey to a UPS in case of power failure. However, if you have a lot of very distant zigbee devices, you should also plan to redundant the power of your zigbee repeaters otherwise there is a risk that they will no longer communicate with homey during the power outage.

1- if the power of homey is cut then you can no longer control the devices that are paired on it. However, when the power returns, all devices are operational again (with some exceptions)
2- Indeed it is the risk but point number 3 answers I think of your need: connect homey to a UPS in case of power failure. However, if you have a lot of very distant zigbee devices, you should also plan to redundant the power of your zigbee repeaters otherwise there is a risk that they will no longer communicate with homey during the power outage.

Hi Guy56,
Many thanks for the confirmation for the way to go, sounds logical

Did you implement it ? What about removing a device playing role of extender like a lamp or power socket, could we remove it from the Zigbee mesch by command in a workflow ?

Something cannot be both generic and specific

To clarify: it’s not a generic Zigbee issue because the limit isn’t imposed by the Zigbee standard.

Ye i know both the meaning of that word and the sentence as a whole. and the insights of this “issue”. and again, read my post, never said it was a generic flaw across the board. Just a common limitation in specific hardware environments. (As earlier stated).
If its easier for you just put in “hardware environment” in the specific-part if the sentence. And generic you can change to general/common, then perhaps the sentence get simplified when someone isnt used to eng.

in dutch ill guess its same as algemeen / gemeenschappelijk…
Iam not Dutch, used google for that part.