Homey pro loses connection with all my zigbee after update

I’d recommend contacting Athom - they would have the best chance of giving the best help!

Is this maybe what is now done automatically when this message appears on the timeline? 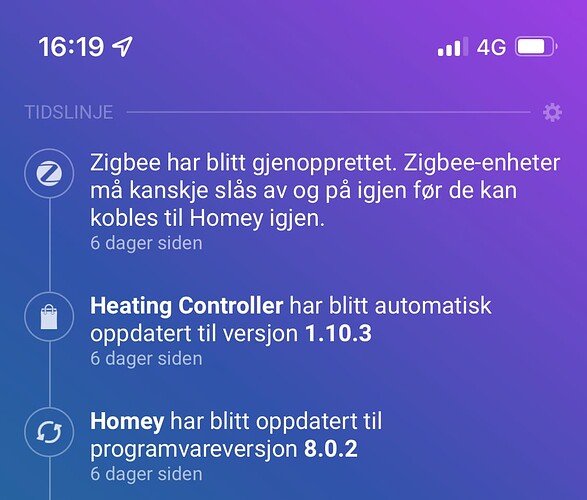 “Zigbee has been re-established. Zigbee devices may need a restart before they can reconnect to Homey” (my translation)

I can’t find any documentation on this feature, which has been invoked automatically.

Interesting, never seen this before.

Don’t think it is “reconnect”, but devices should be “activated” ones. (switched on/off)

That was my translation, it would be great to know the original message.

Back on the original topic… something is very odd.
All of a sudden my switches started working again. Happy as I was I tried to pair a device. That didn’t work and now all my devices don’t respond again.

Temporary disabling all other zigbee apps prior to the pair process, works for me.

Everyone but the one being used for the device in question, or all zigbee apps @Peter_Kawa ?

If you want to pair f.i. a Tuya Zigbee device, that app should be enabled.

Bummer, I’m out of ideas now. There seems something odd going on, like a bad connection on Homey’s PCB or something like that.

Tip is to ask homey service they are really fast och helpful . My issue solved it self after trying there tips

What did they ask you to do?

Try some different, first they wanna know exactly my issues and see my ZigBee network.

And they told me to do a full installation of the update from recovery mode , but it didn’t help.

But what got my zigbee up and running was to reset 2bottons and re-pair them without deleting them in the app after them re connected as new divece. everything started working

I had the exact same problem after update to 8.0.2. Never had these kind of zigbee problems before (but did have some others). My latest big change was the zigbee rewrite in which I manually had to rewrite all my flows.

I put Homey in recovery mode twice and updated with desktop with shift+ download full update. All didn’t help.

Homey was able, for a few seconds, to connect to 1 or 2 devices and then eventually didn’t communicate anymore. On the developer website of homey I learned that my humanfreemem (or something like that) was 1%. I figure homey was having a zigbee or memory issue of some sort. I ended up being kind of frustrated because I couldn’t put my lights on (because lights ánd wall switches are zigbee).

After reading many zigbee posts about homey on the forum (mainly about the zigbee chip that sucks) I decided to take on the tremendous amount of work (again) of reworking all my flows. And to move all my devices to my Hue Bridge.

Apart from 2 ikea sensors, which don’t pair with hue and two robbshop energy meters. I have moved everything to hue and it has been an awesome experience since. Homey didn’t work as fast with hue in the past but now it works almost instant. It’s a blessing, finally a fully functional working and healthy zigbee system after two years of problems with homey.

Therefore I can highly recommend you to move everything to a hue bridge if that works for tuya or to some other zigbee bridge and connect that bridge to homey.

Moreover, homey released a video on YouTube yesterday about hue. In which they state that even homey advices to connect all lighting to a hue bridge rather than to homey.

Thanks for sharing.
I actually started down that route but it turned out that my Schneider switches didn’t work well with Hue. Sadly there is some bug in the switch firmware which made it impossible to turn lights off fully (you could only dim them to 1%).

Hopefully that’ll be fixed in a future firmware update though, I’ll revisit it then

Sigh… so I redid my whole zigbee mesh. I mean re-added all devices from scratch, updated all flows etc. And after the update to 8.0.3 it’s the same story all over again.

Sensors report but no commands are executed or status shows on my Schneider devices. Gah.

Use at own risk! Hi, So I just go a new house and wanted to make my Zigbee network a bit better by removing an re-adding my devices so I get a stable network. But the issue with this is you have to fix all your flows. (Ofcourse Flow Checker App for Homey | Homey can indicate the broken flows) I made a small script which can help with fixing the flows. So what do you need: Device ID you would like to update - You can get this via the webAPI playground: Homey.devices.getDevices(); W…

.
Alternative: I added every zigbee device to it’s own matching < group > device.
This way, I only have to change the group member (old device for new device), flows stay unaltered.
Disadvantage: zigbee devices depend on < group > app

For sensors: if you use the Zone activity in flows, you can also replace devices without needing to modify flows.