Homey doesn’t seem to read the right position of my awning. I have a awning and a screen. I don’t want Homey to lower my screen when the awning is down. I have the right cards in my flow, but the screens keeps coming down

Checking the position of my awning in Homey:

Looking outside, or in Connexoon:

What am I doing wrong? Is there an other way to keep the screen up?

The position-settings of my screens do change, even when I use the Somfy-remote.

Having a little bit of a laugh at work. I receive a pushmessage when the screen is closed by a flow. My wife is at home, and she is opening the screen with the remote when it was closed. Copple of minutes later I receive a message again that it wil close again

Seeing her being mad at Homey in my mind already

I can confirm this:
In Homey/ Somfy Tahoma app open means closed and visa-versa

Thanks E-J, but that isn’t the problem.

The problem is that Homey always says that my awning is up, never down.

Some devices have a setting for changing/inverting the inputs and/or outputs.

That won’t change the status in Homey, that will still be “up”…

How do you operate your screen? With remote and switches?

With remote and Somfy app (Connexoon).

Homey will close it with strong wind, rain or sunset.

The problem is that Homey can’t read the actuall position, found this problem also with my screens/roller shutters after using the remote. Searching and hoping for a workaround…

Can this be the problem? Or is it also when you control your screens with the Tahoma app the screen positioning doesn’t change

Didn’t try that yet…sounds logic…
Will give it a try when I’m at home and see what Homey does.

If this works right, then it would be great if the Somfy remote could start a flow in Homey

–> Starts dreaming about the oppertunities <–

if the Somfy remote could start a flow

And that is unfortunately not possible

But you can use a different remote like an Aqara pushbutton

I use a remotec 8 button switch. Even wife and children get the point 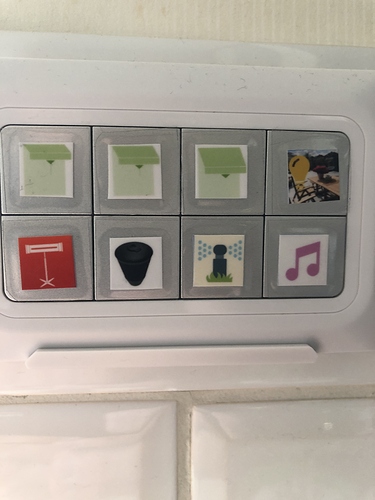 Even wife and children get the point

Yeah, that could be hard somtimes

Tried to change the screens and the awning with different methods.

You can always send Close commands even when it is closed.
The advantage is that the status is synchronized that way.

I receive a pushmessage when the screen is closed by a flow. My wife is at home, and she is opening the screen with the remote when it was closed

looks like you have some finetuning to do. It should operate the way the wife likes without having to use the wife the remote​:blush: