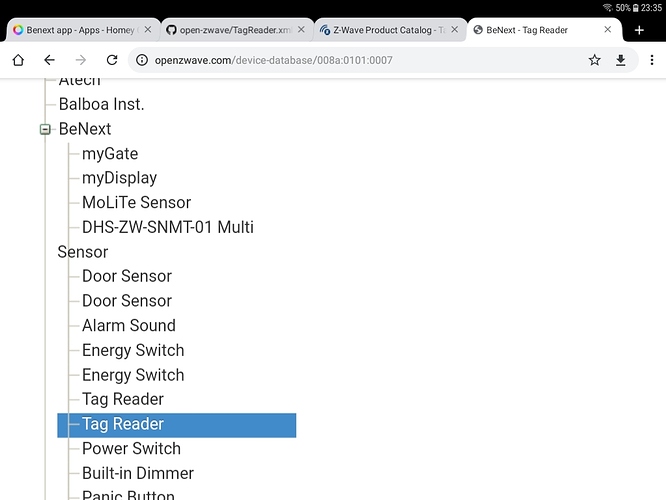 I looked into it and it should also work with the Tag Reader 500 Driver. So I added the product IDs.

Hi
Thank you Mapulu for the help and the job
Regards

It’s approved and alive as Beta

Hi thank you
Just checked for me on homey app is always the 1.0.3 the beta version
Regards

Did you already pressed publish?

The app is published as beta 1.0.3. It is however not updated to the latest version from Martin 1.0.4.

I have the P1 dongle from Benext installed for some time. I cannot seem to get anything usefull of it. I get data from the dongle but i would like to do more with the data. For example i would like to know the amount of electricla power used in a day.week or month. I have absolutely no idea where or how to start with this. These are the opions i get: 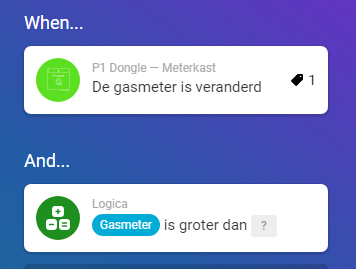 Can anyone help me with logic to point me in the right direction?

My variable is named RelaisBuitenVerbruikMaand and at the end of every month I decrease the current energymeter with the saved value from last month (which actually is the usage over the past month).

Finally I have a second flow to reset energymeter to 0 without having a wrong usage at the end of the month. That flow looks like this:

Then I have another variable that I use to save the date and time of resetting, but this is optional.

Thanks for the explanation

. I am realy trying to understand it but my knowlegde of logic is very bad.

Okay, I made a variable called RelaisBuitenVerbruikMaand. It’s a number variable so I can make calculations with it and store number values inside it.

My relais has an energymeter that continuously increases (until I reset it back to 0, but otherwise it will only increase), so let’s say that at August 1 the meter gives a usage of 100 kWh and at August 31 it says 105.6kWh. The usage for August is then the actual meter value minus the meter value at August 1, so 105.6 - 100 = 5.6kWh.

The actual meter value is always available in the device itself, but the value on a specific startdate is not unless you store it in a variable at that time. In my example the 100kWh meter value from August 1 needs to be stored somewhere otherwise it’s not available anymore at August 31.

So at 23:59 on every last day of every month I calculate the above example {{Energiemeter-RelaisBuitenVerbruikMaand}} and store this value in the same variable. So what acutally happens is that the stored value (100 of August 1) is still in the variable, then it will calculate 105.6-100 and stores the result (5.6) back in the same variabe which I then use to make a notification on the timeline and send it in a push notification to my phone (to be sure that the new value is stored I do this after a delay of 3 seconds) and after that I put back the current meter value in the variable so that I’m ready again for another month.
My complete flow looks like this:

Hope it’s a bit clear now. If not, then feel free to send me a personal message, I think you can also read and speak Dutch, so it may be easier to understand and explain to each other.

It is possible to switch beta version 1.0.4 in master?
I think all homey box have moved to v2 so it is no reason to keep all version and this will solve Tagreader issue & store beta issue!
What do you think?
Regards

Thanks for publishing 1.0.4. Tagreader is working great again.