Hello community, I have a couple of Aqara Waterleak sensors. They work good with Homey. When water is detected, a notification is send directly.

Only the battery status is always 100%. Last week 1 battery was completely empty and the sensor did not send a battery notification to Homey, like it is configured in Homey and I even have a flow created for this. Othe Aqara sensors (like temperatuur sensors) give the correct percentage. Is there a way to ask the Aqara sensors battery percentage?

Is there a way to ask the Aqara sensors battery percentage?

Afaik no. Sensors report if values have changed. Homey doesn’t poll for sensor values.
Maybe removing the sensor from Homey, resetting it and pair it again might help.
Is it a Homey Pro by the way?

Hi Peter, thnx for your reply. Yes it’s a Homey Pro. I reconnected it already, but I don’t think it changed the situation. I had a chat with Aqara Manufacturer. They say it should report the battery status every hour. But that is in combination with there own supported Aqara bridge. They do not support Homey. This I can understand. But when it reports it’s battery status every hour, then Homey should receive it also, I think. I tried also to INTERVIEW the sensor form Homey Developer, but this does not work with “sleepy nodes”. Hmmmm… Do you maybe have experience with an other brand/type water leak sensor that does give a correct battery notification?

Hi Ron. I had the sam experience with Homey Pro and Aqara sensors. The only sensor from Aqara in my network that Homey Pro can receive battery status updates from is the temp & climate sensor. Water sensors, motion sensors and door & windows sensors will just leave the network without warning when battery goes too low.
I perviously tested them in my Home Assistant lab setup. While they do not send full status report every 50 min, as stated by Aqara, most sensors included the water sensor would report battery status several times during the day. I don’t know why Homey Pro is not able to receive such a report.
After all Aqara sensor left network several times without warning I switched my critical sensors to Develco motion (ZigBee) and Fibaro door sensor, flood sensor and smoke detector (Z-wave Plus). Works ok so far.

I tried also to INTERVIEW the sensor form Homey Developer, but this does not work with “sleepy nodes”

Afaik, you’ll have to push the sensor pair button every 2 secs or so, to keep it “awake”

The only sensor from Aqara in my network that Homey Pro can receive battery status updates from is the temp & climate sensor.

Confirmed, and Homey receives the contact sensor battery status also.
All 4 of my PIR sensors have 100% battery, which can’t be real (running since last february) 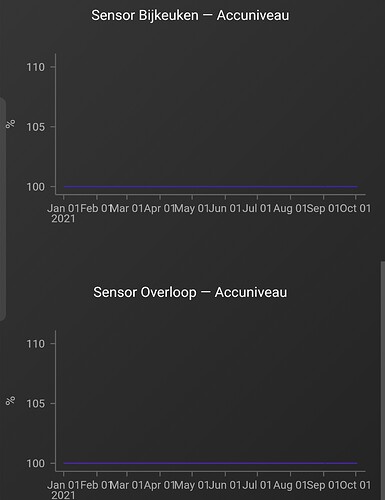 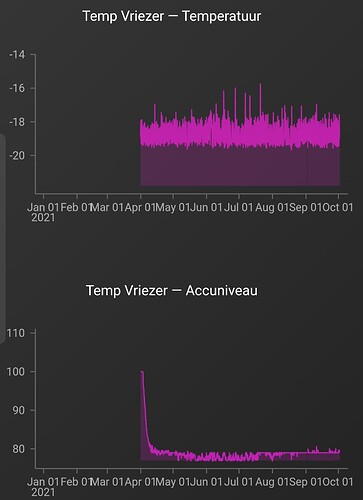 Thnx all for your input. I have also temp sensors from aqara and can confirm that they report batterystatus correct.
I will try to contact Homey support to ask why Homey Pro does not receive the battery updates from the Aqara sensors and I will think about changing the sensors maybe to Fibaro. Only minus is that they are a lot more expensive.

I do not think Athom can be of much help, and you may need to check if the Fibaro’s do any better. Battery states prove hard to get right for a lot of devices.

First of all, the device needs to send the values periodically. App developers depend on what the device gives them. This is often a battery voltage, and new values may not come often, sometimes they are not updated at all.

The correspondence between battery voltage and battery percentage depends on multiple factors, so it is not always easy to do right. The voltage drops when the device draws power, only to go back up when it does not. Actually, voltage is a cheap, but very bad way to estimate battery levels.

Most developers assume there is a lineair relation between voltage and percentage but it never is. The actual curve differs from battery to battery and from device to device. This is why it sometimes seems the battery is full for a long time before it starts to go down, and then when it goes down it suddenly goes down fast. Sometimes even so fast that Homey didn’t see it coming. Because the actual curve isn’t known, assuming it is lineair is not only the easiest, but also the best guess the developer can do.

A good battery may hold the right voltage for a very long time, especially if the load is very low. So good batteries actually lead to bad predictions on battery levels. This may be the case on the water sensor, as it uses very little power when there’s no water to detect and the sensor sends verey few state updates because there’s nothing worth while to mention.

Also the voltage depends on other things like load and temperature. In the graph above for the freezer thermometer I think you can see this. The battery level seems to drop really quickly from the start from 100% to 80%. I think this is because the battery cools down and is having a harder time delivering power, not because the battery is being depleted quickly.

Maybe throw the water sensor in the freezer to see what happens?

(I do not take responsibility if it breaks though).

Thnx Edwin for the explaination. If it works not accurate, that’s not a problem for me. I would be satisfied when I could see that the battery was 50%. Then I could replace it in time. Then I do not use the full capacity, but the sensor will like this always have batterypower. But the signal is not comming to Homey. So I have to look for something else.

Same issue here. 6 water leak sensors with a dead battery but they’re all still reported as 100% in Homey.

I’ll ask the dev. from the app if he can be of any help.

I can image it is hard to predict. But if HA and the Aqara bridge can do it, Homey must be able to predict some change…

Any update on this issue ?
Same pb here with Aqara weather sensors (lumi.weather). I have got 4 running for 1 year, and homey is still reporting 100% battery. Two of them died last week (battery empty).
I’m surprised because this particular sensor seems to be OK from your feedbacks.

I read somewhere that the battery status is visible in the aqara app. Is it visible in Homey if you connect the sensors to the aqara hub and then the hub to Homey? If yes, it could be an interesting alternative to buying more expensive sensors.

Well for me it is not a real option.
The Aqara hub is another Zigbee network.

The more Zigbee networks the more they interfere with each other.
You need repeater devices for both networks to let the mesh reach all over the house.

Good point. Of course ideally I would also want to see the battery status in Homey. I was just wondering about other options to feel that the sensors really are an added security that I can trust. What I am doing now is just changing the batteries a bit more often to be safer.