I recently bought and mounted 3 Aqara TVOC sensors in my apartment because I feel like I’m suffocating in here as I keep the windows closed to not let the cold in, and I was recommended to buy an air quality sensor.

Now I was expecting them to read and give alerts for absolutely horrible air quality in here, but all 3 shows less than 100 ppm and all 5 leafs are lit up…

Why am I still feeling like I’m suffocating while the air quality is top notch? Are these sensors just bad or misreporting?

CO2 is odorless and tasteless. Your body cannot tell whether the concentration is approaching a dangerous level !
Your feeling must have another cause. Please speak to a doctor about your problem. The table, unfortunately in German, can explain the ppm values ​​to you. 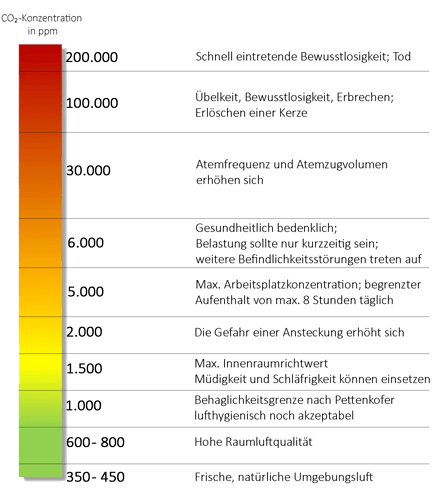 That’s CO2 though, that isn’t TVOC like the OP mentions, It could still be CO2 causing as that isn’t taken along with measuring TVOC.

@Floof
There can be a lot of other things that can cause this, including the mention CO2 by undertaker
Or it could even be PM2.5 causing you headaches (though PM2.5 usually gives breathing issues first).
Suffocating could also be that there is a over pressure in your room/house, is it hard to close (outside) doors?
There are just too many things that could be wrong (besides health related things), kinda impossible to help without being in your house and or knowing your situation.

@Undertaker If I open some windows the air feels better, but now that winter is closing in here in Norway, it’s difficult to keep any window open and keep the heat up. I’m sure my doctor will just tell me to go buy an air quality sensor anyway lol.

@Caseda I thought it might be CO2 levels getting too high. A friend of mine got a Netatmo indoor sensor with CO2 and it gave him a warning last time I was at his place as 3 people in his apartment made the amount go above 2000 ppm and we both could feel it.

There’s no issues closing doors or windows. My phone and one other sensor I got shows around 0.99-something bar so that should not be it.

I thought CO2 and TVOC measurements was the same as all of these are all called “air quality sensors”… Apparently it’s not.

Don’t know about the quality of the Aqara sensor though. There’re are other air quality sensors supported by Homey (eg Kaiterra/Awair/Airthings) which probably are more reliable.

I learned about the AirThings sensor today but my god it’s expensive… I also found one called Mco Home MH9 that’s also compatible with Homey but that’s not much cheaper.

I have not heard about Kaiterra or Awair before. I can’t find those brands in any Norwegian stores either.

I did find a Mill sensor that’s much cheaper but not yet Homey compatible. I sent in a request for it to the app developer

Actually that Netatmo CO2 sensor is not that bad, but it doesn’t measure VOC or particles. Borrow your friends device and see what levels you’re at!

He lives 9 hours away by car so that would be difficult. I found some from Mill that’s not Homey compatible (yet) but they’re cheap so I’m gonna get one and see what it says.

Air quality sensor can help you get aware of some common reasons for bad air quality that you may not otherwise be aware of. It is however not a diagnostic device that can detect everything or can tell you why you experience bad air (unless it just happens to be the exact thing causing it).

Also - if you do experience problems, then you do not need the air quality sensor to tell you you need fresh air.

Numerous things could cause this, a lot of which you can’t even buy sensors for, let alone cheap. Could be CO (not CO2), mould, an allergy for x, y, z, …, Radon, O3, … So if you experience discomfort visit your doctor, and if he advises you to self-diagnose with air quality sensors get another doctor. But I can assure you he/she/they won’t.

I have more allergies than I can remember so there’s no doubt about that. I have a BlueAir Classic 400 running 24/7 plus one extra air purifier that about every store in Norway now has a rebrand of by now in my bedroom running while I’m asleep.

I’ve not had this issue in the past 10 years I have lived here but I have been more physically active in the past couple of months which may be why I’m noticing it now. This has not been a problem when I have been able to keep windows open, but now that winter is coming and all my windows are closed is when I started to feel like this. It also goes away if I do open a window but then I’ll just sit here freezing or working against the cold with an electric oven or heat pump.

I bought the TVOC sensors because I thought these would give me any info or some warning if I did need to air our the office and apartment but they say the air is as pure as can be. One of them reads as low as 14 ppb.

I did not know that there was a difference between TVOC and CO2 when I bought and installed these, so I thought they were junk, hence my initial post.

And you are correct that I don’t need a sensor to tell me to open a window, but again I thought these would tell me something useful why it feels like I’m not getting enough air at least. So far they do not lol.

@Floof is the Mill Sense working properly with Homey Pro? I’m considering buying one, but Mill said that they do not have an official app for integration, so they don’t know.