I have a flow, based on/copied from this flow form Erik Smit: https://homey.app/en-us/flow/xfBOm6/ 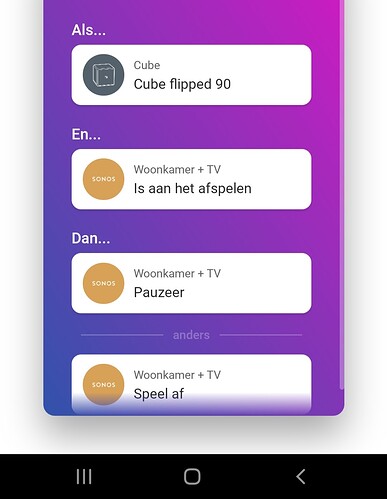 Problem: it does not work. The flow to set volume with cube rotation works perfectly. Difference with the Erik-flow: I use the Conbee2/deConz app for Zigbee, not the Homey Zigbee. The option for the Cube flip ‘from any side to any side’ is not available in the deConz app. And I use Sonos S2, not S1.

Strangely in the first attempts the pausing worked, but the play after that did not work. Restarting the Sonos or deConz app or the Homey itself did not fix the problem.

Could it be Sonos still says the device is playing, even when it’s paused? Have you put in notifications yet to see which parts are actually executed?

‘notifications to see which parts are actually executed’ sounds good but is something I have not yet discovered :-). You have an example? Your first comment is maybe spot on, will investigate both options, thanks!

There’s a card for it, it will show a line on the front dashboard. Put one above and below the else. If it keeps triggering pause you know what’s going on. A sample: 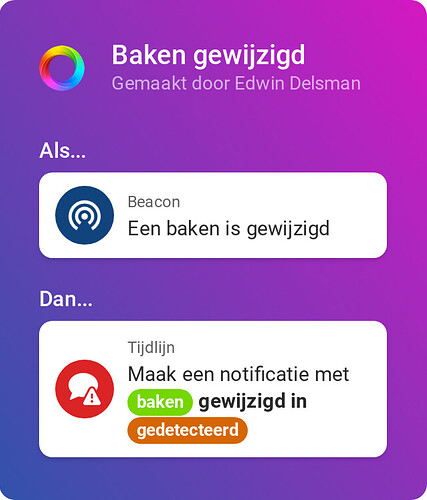 Ok, I should use the app Beacon or is this just an example?

Just an example I had, the notification is done by the flow card below.

I made 2 notifications. First one returns ‘false’ after the Mute action, second one returns ‘true’ after the Unmute action (I exchanged Pause/Play for Mute/Unmute in the Then, no difference). Now I am puzzled, I would expect this to be the other way around: the first ‘mute’ action actually mutes the Sonos Group/Woonkamer + TV, so should the notification not be ‘true’ and not ‘false’? 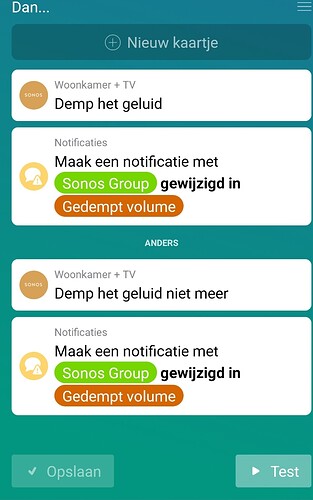 It is still hard to see which clause activates because the notifications have exactly the same text However it does seem to me both the if and the else are triggered. I suspect the state isn’t accurate because it takes time to send the command and receive the new state. This is probably a timing issue that the notification is done before the mute/unmute command is fully executed.

The mute sample seems to be working then? Do make the notifications different, so you know for sure which one you’re looking ast.

Did u try to delete the AND card and see if it works?
There was a lot of trouble with the “is playing” card.

@Rocodamelshekima Indeed without the ‘and’ card both steps work. Could it be there still is trouble with the ‘is playing’ card? Can I submit a bug somewhere?

Update: submitted a bug to Athom, hope they can help.

The Sonos app was realy fun back in the days. By the time Athom followed Sonos more then providing the community a good experience i stopped using the app and using the Say thing. Well, i use something simular for a long time now btw. But it must be something commercial for them (understandable) to use the things Sonos wants them to.
The “is playing” card was giving trouble for like some years now.

I have put in a Athom support request to fix the ‘Sonos is Playing’ card 9 months ago. Today I asked for the progress, but Athom support says it is still on the backlog, low priority I guess :-(.

Am I the only one trying to use this Sonos card in flows? Or are there other solutions for this?

It would help if other users also ask Support to fix this :-).

Or are there other solutions for this?

Yeah thank you, saw those of course. To be more exact: are there other solutions than those in this thread? Thanks for the pointer.

@Beege, I want to use the flow card „is playing/is not playing“ also. And I also informed Athom several times. I don’t know why they don’t solve this issue…

I don’t know why they don’t solve this issue…

Athom decided to keep most of their apps closed source (in fact, the Sonos app was one of the first that they closed), meaning that only they can fix any issues with those apps. And Athom doesn’t focus on apps a whole lot anymore, as they say here: Dyson control doesn't respond (but no error either) - #8 by CyberSponk

Thanks for the info and explanation. Still, I don’t understand (I guess this is the better word) why Athom decided to ignore their own apps from big name device manufacturers (e.g. Sonos, Fibaro, etc.).
After all, what’s the point if Homey runs fine (which it should anyway) but the necessary apps don’t?

For a while now, I’ve observed that apps that were previously programmed by private developers are now being adopted by device manufacturers (e.g. Innr, Aeotec, Qubino, Namron, etc.).
This may work for some device manufacturers, but I’m pretty sure Sonos won’t overtake the app development.
It could be possible that e.g. Fibaro will do the development. But if Fibaro are still as slow in fixing bugs or adding (third party) devices as they were 2 years ago, then not much will change in processing times.

They’re not ignoring them, they apparently have higher priority projects that they have to work on with the limited manpower that they have.

In my opinion, the main issue here is that Athom has decided to close their own apps, not allowing any outside developers to work on them. I think this is detrimental to the “Homey” brand because users get stuck with half-functional apps that feel abandoned (but hey, they already bought their Homey’s anyway so the money’s in the bag), and could actually hurt Athom/Homey in the long run.

For a while now, I’ve observed that apps that were previously programmed by private developers are now being adopted by device manufacturers (e.g. Innr, Aeotec, Qubino, Namron, etc.).

This is mostly for marketing purposes, I think that most of these apps are still being developed by the same developers (sponsored by the manufacturer, I hope) and the apps just got the manufacturer’s name assigned to it because it looks better to the outside world.