Advanced Flows is an amazing power tool for Homey Pro users. One feature I would like to request is temporary variables that only exist for the duration that the flow runs (and don’t interfere with logic variables).

This would allow pro users to save the state of something while a flow runs and use or restore it later. Eg. I might want to have a flow that temporarily changes the music volume level but wants to restore it to the previous volume level towards the end of the flow.

I could think of workarounds to get such a thing in place but I suspect temporary variables would be a more structured feature that would elevate the flows of many users.

Dit you use the search function?

@Arie_J_Godschalk you’re right, of course! I didn’t think about that during the AMA. I’m not saying we will add local variables someday, but it sure is noted as a requested addition

I did, but nothing popped up based on several keywords. Thanks for linking the Q&A.

I get it. They call it ‘local variables’ instead of ‘temporary’. But you can find a few workarounds in those topics. This is also a nice thread: [FAQ] [Advanced Flow] Infinite canvas. Infinite creativity

Its always a bit hit and miss with these things…

But you learn along the way. Thanks for the FAQ article. There are also already new existing apps being build to extend Advanced flows in other ways, such as Advanced Triggers App for Homey | Homey. A new one is API Builder App for Homey | Homey which is also a very nice idea, unfortunately it comes with a subscription that might outweigh the value for some.

I created a app that just do that. It should come out tomorrow.

Once it released, there will be post in #apps 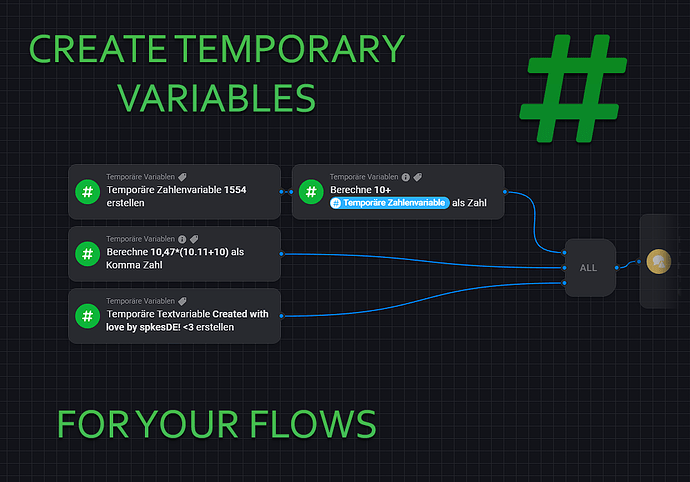 Amazing news! I ook forward to giving it a spin and test it out. Im sure it will enhance the flows of many users, including me of-course.

Thank you for the teaser and your great contribution

Its finally approved.
Check it out here

Great news. Congrats! I’ll waste no time to give it a spin