I’m testing the advance flow for a few days now. IT IS GREAT. Had to get use to how to use the statement but now ik know it is just great.

I got two remark.

Thanks for the great work.

While waiting for it to be implemented 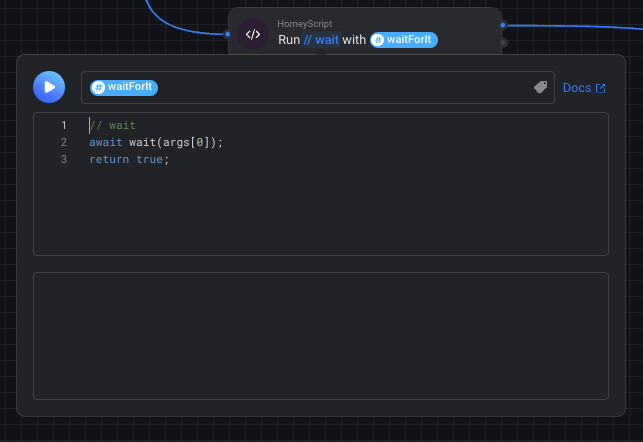 (This will be in milliseconds, so a value of 500 waits for half a second)

thanks for the workaround. this works great

During the AMA on 5-7-'22, someone asked if there is gonna be a “Dim all lights in a Room” card.
Just in case that person also reads this forum: The App Device capabilities (Apparaat mogelijkheden) has the functionality to set devices in rooms based on there capabilities.

In the AMA of 5-7-'22 at about 1:01:30, you are responding to a question about local variables.
I also have allready asked that question to you on the other forum-thread, but i will ask it again with a better decription and example.

Because at 1:01:50, you say that the local tags can be modified. I think you misspoke here, because as far as i know, tags cannot be changed: using for example the “Read as JSON and set PATH to […]” will create a new (modified) tag.
And this creates a “problem”.

But maybe i am missing something? In the AMA you talked about modifying the Tag.
Is there a way of modifying a Tag within a flow (and thuse: not creating a new modified Tag)?

So i will now try to explain what people, or at least i, mean bij local variables: Scoped variables/tags that are mutable/modifiable and bound to the flow-execution.

Why would you need this?

So i can set scoped variables based on if-then-else statements or assign default values in case there are errors.

Here is an example. In this example, there are three Text-Tags generated.

I have a lott of real use-cases. Like this example, after changing the Tag, i cannot recombine the three lines into one card, because it would not know which Tag to use.

The only way to “modify” and “re-use” a value throughout the flow, is to put it in a variable, recombine the lines and re-read the variable.
Problem is, this is not scoped: running the flow multiple times paralel (fastly triggered for example) would change the variable during the flow execution for al flow-instances.

Here one more example of the pain to update variables throughout the flow, just to set default parameters, and still: this is not scoped and could give issues when executed paralel to each other.

@Arie_J_Godschalk you’re right, of course! I didn’t think about that during the AMA.

I’m not saying we will add local variables someday, but it sure is noted as a requested addition

Thanks Adrian for replying to me, Its indeed too late to change the default reactions of the script. It was just my logical opinion to my first experience of the script what feels logical to me.

Never the less I’m amazed what it can do and how it’s been graphical designed! Love the way athom creates logical functionality combined with a nice UI.

AF is indeed nice feature, after playing around would be nice to see :

Btw I really thinks that AF may help optimizing overall CPU usage (peaks) of Homey because with AF, I can replace eg. 10 flows with one, which has one trigger and only one path for execution, while previously I had 10 (same) triggers which triggered all 10 flows but only 1 executed.

Hi Sharkys, thanks! Same idea here. Really nice to play with, but it ends in a mess rather quickly for chaotics like me.

@Dijker
Don’t know if this is the right place but I saw a YouTube clip with a couple of tips.
If this is the wrong place, you can remove it.
https://youtu.be/L8LBou635Gs

And a way to use multiple error results as a single tag, so that I only need a single error card instead of multiple in this case:

I thought of:
Add all error tags to the notification card. It then will only send the first occuring error (assumption), which makes sense. Solve the error, and any other error will notify you when the flow ran again.

Apologies if this was addressed already, couldn’t find it:
@Emile it is not clear, which error comes from what card? Hovering does not return a (card or device)name. 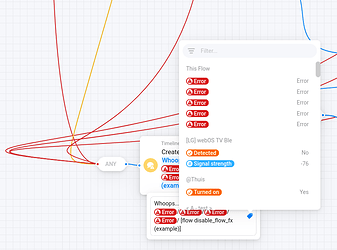 Can this be programmed like the variable tags? They are kind to us and return the device name when hovering:

+1 for both of your points.

Also I like to see a simple math card where u can enter a Formula from tags and it will give you a result card. currently using a Homey Script Card

it would be awesome if there is a possibility to group a set of cards.
this would give you a set of possibilities as: 1 line to those groups, moving the groups easily, and keep it more organized.

You can do that temporary by dragging a selection around it, including the ‘any’ blocks. You can add other objects by “CTRL”+click.
After that you can drag the whole selection as one object 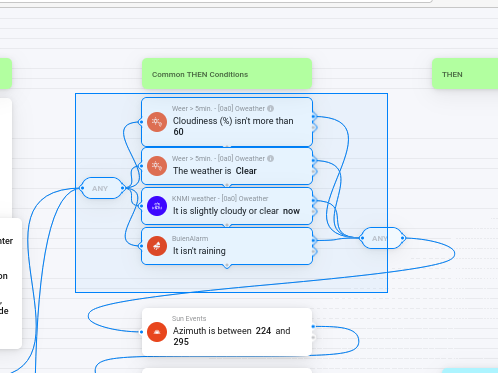 Also I like to see a simple math card where u can enter a Formula from tags and it will give you a result card. currently using a Homey Script Card

Not sure what you mean, but this won’t do? It updates a var ([Rolgordijn_%_open]) which you can use in following cards. 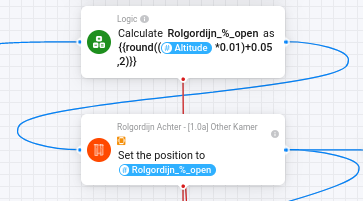 I want to have a card that doesn’t need a global var. That’s why I use a Homey Script, so I have the result only for that one flow.

Ah I see…
I think this is related:

@Arie_J_Godschalk you’re right, of course! I didn’t think about that during the AMA. I’m not saying we will add local variables someday, but it sure is noted as a requested addition

Technically you don’t need to use HomeyScript for this (I like the out of the box thinking though), you can use normal logic cards, but it will take 2 cards:

first card = create TEKST as text-tag (THEN card), where you can calculate in.
second card = convert TEKST into a number tag (THEN card)

Technically you don’t need to use HomeyScript for this (I like the out of the box thinking though), you can use normal logic cards, but it will take 2 cards:

first card = create TEKST as text-tag (THEN card), where you can calculate in.
second card = convert TEKST into a number tag (THEN card)

That is one way

I keep the homey script way, one card less

It has only to be parsed since it get already calculated with the input.

@Peter_Kawa i didn’t saw that

But that’s what I kinda wanted

This is a disabled flow, I could not resist clicking the test button:

@Jero The simulation runs fine, but to my surprise Homey restarted as well? That shouldn’t happen imho

I tested twice, because I assumed it was pure coincidental, but it isn’t.