How much time does it wait for all to become true?

Advanced Flow — Ask Me Anything

As a consultant I can say I most often have the correct answer:
In this case: It depends…

And you can see that,
Untill

Does anyone know how to do a motion → lights on → delay → off correct?

A simple flow is running at my walk in closet. Motion is triggered, lights turn on, the delay runs and the lights go off.

But if i enter the room after 2.5 min, the timer does not reset and the lights turn off after only 30 sec.
It seems as the timer keeps its delay running, even with a second trigger signal.

Is there a option anywhere to reset the timer when motion is triggered a second time?

As a consultant I can say I most often have the correct answer:
In this case: It depends…

And you can see that,
Untill

But what if I use it in a flow hat is not started by a button, but with a “oldfashioned” card

Does anyone know how to do a motion → lights on → delay → off correct?

Zone activity won‘t work if you also have a contact sensor in that zone (open window).

But what if I use it in a flow hat is not started by a button, but with a “oldfashioned” card

in that case the light was off, the first Run triggered from fe a Favorite Flow from the homescreen it runs for ~ the time of the delay (In my case 1s, but would not differ in result if it was 999 minutes)

The Second run initiated from the card Right above Turn on Light => Triggerd by Left bottom “The Light turned On” I guess a couple of ms.

But As I said, Why do you want to know? It doesn’t change the result of the executions.
Do you have an example where you think it does matter how long a flow runs?

So I misunderstood. It will be triggered, but never finished because of the ALL card

Yes it’s fixed, thanks a lot

I just wanted to point at the “not triggered” statement. It’s a difference whether a flow is not triggered or if it doesn’t end/continue. So the topoc comments should better use the correct words.

In that case you could consider moving the window contact sensor to it’s own zone. But do not use a subzone though (they activate the parent zone as well)

How come this is not possible? (see video and you’ll understand what i mean)

@Jero Curious: Taking the words ‘Advanced’ and ‘infinite’ serious:
Are delays in flows now ‘saved’ in case Homey loses power or restarts, and the flow is busy running a delay timer during that event?
Because that is somewhat odd with the simple flow editor:

(I know one can use a timer app for fixing this, but we are going advanced here, aren’t we

What is the intent on adding ability to edit advanced flow on the mobile app?
For example fold phones or tablets have screen space.

In the mean time, would it be possible to provide a screenshot of the flow in its MQTT graph like state when one clicks on the advanced flow in the mobile app??

(At moment it just displays the Advanced Flow Icon and States to go my.homey.app to edit) 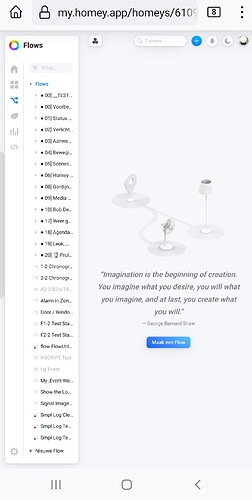 Any given card in a flow will always only run once, so even if it was possible it will stop after the delay as the logic flow card was already run (to stop (accidental) loops from happening)

Advanced Flow — Ask Me Anything

Lol, i started getting worried: a flow in the editor took about 15 seconds to run.
But when i executed the flow from another flow, it was almost instant!

“headless” (without graphical window) run does not require the animations

Was it in the introduction video, or somewhere else, but remember situation, where the activity’s downside execution bar fills … hmm, around sec, two, but when the mouse hover on it after, there was clear message about ~10 μs activity execution time. And… to be honest, at least i personally am not able to see all the animations, if they are in real/actual time.

How come this is not possible?

Correct,
You are not allowed to create loops on the canvas.

does it make a difference if the any block is there or if i go directly from both blocks to the action?

Any answers on that one?