Which smart brand to use? Fibaro, Xiaomi/Aqara, Neo, Aeotec or others?

Do you think the aqara devices itself are bad? Or is it just the homey zigbee part wich hopefully get an update soon… Personally, I am also considering to replace all the xiaomi stuff because of the some problems, but I think that is a waste of money as I’m having trust that they are working fine again after the big zigbee rewrite…

Honestly I don’t know, but your assumption sounds quite logical to me. The devices themselves seem to get a lot of positive reviews, also on other platforms. Given how (not) reliable for example Tradfri works, it could very well be due to Homey’s ZigBee stack. But if it will ever get better, and when? No idea.

What Homey version do you use @TonD?
Because I’m using early 2019 and the Tradfri lights are very reliable here.

would hate when I just fixed a problem with a Neo motion sensor and running into a problem with a Fibaro radiator valve after that. I don’t mind some challenges, but if I can avoid the biggest problems by using the knowledge of the forum, why wouldn’t I?

Of course I can find out that the Neo Coolcam doesn’t have a UV value and the Fibaro does, but I am mainly looking for the experiences of users. What does work and what doesn’t? What problems did you run into, which features did you like and why? Like mentioned in the OP.

I understand people don’t want to give a full review here, but some knowledge sharing would be very welcome.

I also wouldnt recommending having say 3 or 4 different models of motion sensors. I mean not having too many apps is one thing, but as you say x3 apps, also means x3 possible ways it can go wrong. That said you run the risk of putting all eggs in one basket if say all are the same brand.

I personally have 2 brands of motion sensors, because I bought the aeotec without much research then I realised the cheaper aqura one works too. Even then they surface 2 different functions, one is powered, one isnt.

But I seriously doubt there is a big advantage to have say Fibaro for every type of smart device from motion sensors to plugs etc. Also see problem of too many eggs in one basket problem…

That said you run the risk of putting all eggs in one basket if say all are the same brand.

Yes, this is of course also something I plan to take into account. Thank you for the reply. Maybe I will end up using only two brands (for instance Fibaro and Aqara) and retire the COCO, INNR. I guess this will also depend on design and functionalities. Only 2 brands still suits me better than 4 or more for basically the same functions.

Ah, good luck on that! Have a total of 200+ devices here. If i count the Zwave and Zigbee devices it will be unpossible to stick with just 1 brand .

That sounds like a world record. 200+ devices and no problems. Quite a lot people have zwave or zigbee range problems and some people have according to Athom to many zigbee devices. Do you have the egg of Columbo;-) can you give us a little insight in how you realized this working as it is?

There is a max for apps running on ur Homey and we wanna stay below the max ofc. I have 54 apps running.

This is amazing. How is this possible. Where the hell is Homey Pro for? Correct me if I am wrong, but why do a lot of people experience problems when having installed to many apps, and you just installed 54 apps? Pretty heavy Homey you have there. 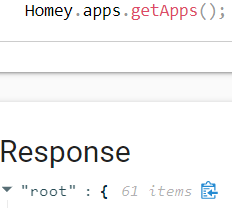 I use mainly aqara switches and sensors, MiLight lights and Shelly switches for Stuff I cant controll with my homey, but want to be able to shut down