2 hours a go homey installed the new update of Shelly. However they are not connecting anymore to homey. Already reboot homey an restarted de Shelly app but no succes. Till 2 hours a go was working perfectly.

Anyone else is having this problem ?

Anyone else is having this problem ?

Did you read the changelog?

I did now now haha

I had some time to spare today so decided to remove shelly devices then re add to get ahead with impending breaking changes. Shelly 1 no problems, Shelly Door Window 2 Sensor refuse to re add, keep getting errors and worse, they now no longer report in the Shelly phone app.

Yes. That would fix it.

Shelly Door Window 2 Sensor refuse to re add, keep getting errors and worse, they now no longer report in the Shelly phone app.

What errors? And it’s it’s not updating in the Shelly app it’s most likely not connected to the network properly. Try rebooting the device and pair of within 3 minutes after the reboot. 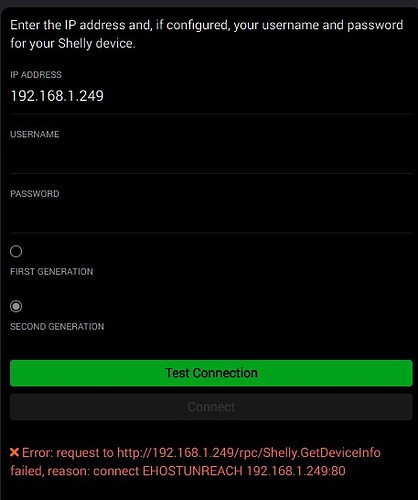 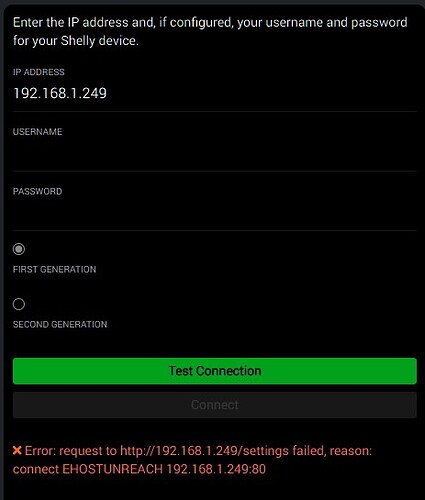 Screenshot 2022-09-15 090620464×545 30.7 KB
That’s when trying to re add one of my two sensors, haven’t removed the other one yet. In the shelly phone app I did perform a reboot of that one sensor via software, made no difference. I then tried resetting it and re adding it to the Selly phone app. That app was able to see and re-add it but now both it and my other sensor are marked as offline, I hadn’t done anything with the other sensor. TBH I am no longer a fan of shelly battery devices, because the batteries are not that easy to find, they cost as much as the sensors themselves and the battery life when used outdoors (in s shed/garage) is less than half what is claimed. Have ordered a Frient pro door sensor for comparison, I can use rechargeable batteries in it
[APP][Pro&Cloud] Shelly
Philip_Montgomery September 15, 2022, 8:49am #8

97cba5f0-81f6-4e67-8c65-2fcadcec9405
Created a diagnostic report, I think. I have, after 2 hardware resets got both the sensors back in the shelly phone app and they seem to be reporting in that app but, while Homey Shelly app can now find them again, it is unable to add them. Hopefully the diagnostic sheds some light

while Homey Shelly app can now find them again, it is unable to add them. Hopefully the diagnostic sheds some light

Could you move this discussion to the support topic? Why is it not able to add them after discovery? Still the unreachable error?

Beg pardon, my bad for wrong thread will move. But yes, same problem. Can see the devices but unreachable for adding