I think you installed the wrong app. There are two apps currently in the store. One from Athom and one from the community. If you want them to control them directly with homey intead of using the hub you need to repair them. Here is how:

Hue lights are also resettable with the round Hue remote (i.e. Living colors gen 2 Remote). Delete the specific light in the official iOS Hue app. Then turn on the power of the specific light. Then press the on button and the one dot button on the remote simultaneously, while holding the remote near the light. The light will blink and has been reset. You can now add the light to Homey.

Sorry. I see your reply was a link. Thanks. Trying now

So I got somewhere, but no functionality. I bought a dimmer / bulb pair off amazon so I can just have a go at the lighting thing. What I found was this:
I can pair the bulb and dimmer switch to each other over and again with dimmer resets (setup button pressed for 10 seconds)
I can put the dimmer with Homey using the zigbee app but when I go into the device it says “No available controls…”
When the dimmer is paired with Homey, I can’t pair it with the bulb.
No matter what I do (paired with dimmer or not) I can’t pair the bulb with Homey.
Does anyone have any advice please?
Many thanks.

I believe the dimmer has no options per se.

You just use flows to control the actions

That may be on that matching bulb or any other because you are just applying actions through flows.

Ah, that makes sense. I guess if I made a flow I would have seen that.
The problem I have is I can’t pair the bulb with Homey and if the dimmer is paired with Homey I can’t pair it with the bulb. Catch 22.

Did you reset the bulb using the procedure explained in post #2? I did not have any pairing problems with any of my hue bulbs after resetting them

Thanks both for the recent replies.
I’ve gone and re read the un-pairing of the bulb and I thought I had the wrong dimmer. Not sure why!
Anyway, will try the in pairing procedure tonight and hopefully get it all running.
Many thanks

Just to confirm, all sorted. The unpairing procedure via the dimmer switch then sparked the pairing with the Homey into life.
Issue resolved. Thanks all for your help.

Edit: found these threads that seem to answer my question

So these 2 reactions made me wonder. What do i actually want rgbw lights for. Do i want that for a full disco party? I probably wont use it for that. Its just for a techy gimmick accent light. So a standing lamp in every corner would be perfect for such usage. I think ill go fibaro all the way like Jamie, with dumb lights in the ceiling and have some hue accent lights that i toggle with a little remote or button, or app ofc. Then i can integrate the aquarium lighting/carbonizing with fibaro s…

Thanks, all. I’ve ordered the Fibaro Dimmer Bypass 2.

When you refer to the dimmer, is this the Hue dimmer switch?

I’m planning an experiment to utilise the Fibaro dimmer 2’s that are behind my 3-way momentary switches to see if they’ll work with Hue bulbs in some way so that I can continue my WAF switches on the walls but also have Hue bulbs controlled via Alexa and ‘an app’ for RGB etc.

I’m hoping that I’ll be able to keep at least on/off at the wall switch and possibly dimming. But also then have the superb dimming ability of the Hue bulbs, Alexa, and RGB via Homey

Knowing that Hue bulbs always need power, I was wondering if anybody had experience of this? I’m presuming the ‘dimmer’ above is a Hue one so might not be the right thread for this

I’m planning an experiment to utilise the Fibaro dimmer 2’s that are behind my 3-way momentary switches to see if they’ll work with Hue bulbs in some way so that I can continue my WAF switches on the walls but also have Hue bulbs controlled via Alexa and ‘an app’ for RGB etc.

IN my experience, the hue blubs do not like the fibaro dimmers … not at all not recommended, its got to do with the way they (smart bulbs) work.

Hello! I have bought my first Philips Hue light. It is a “Hue being Lamp” that came with the philips Hue Dimmer Switch. I installed the lamp and it worked out of the box with the dimmer switch it came with. I am trying to add the lamp to Homey using the " Philips Hue ZigBee" but I am not able to put the lamp in learning mode nor I am able to reset it. I have tried this advice using the Hue Dimmer Switch but it did not work. Does anyone have any clue on how to add this lamp to my Homey?

Thanks. That has worked well. However after adding the light to Homey the dimmer Switch became an orphan. I tried pairing it again with the lamp, the latter disconnects from Homey. Is there a way I can have the light controlled via Homey and via the Dimmer Switch?

@RoyWissenburg. I have added the Hue Dimmer Switch to Homey. I have configured the buttons via a flow.

However, I am not able to configure a flow to set the temperature upon pressing multiple times on the ON button (native behavior when the switch is talking directly to the lamp). Do you have a hint? 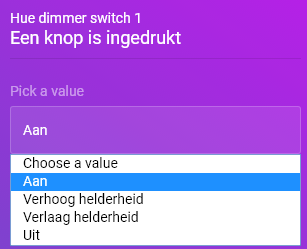 Like you can see on the picture from @Rocodamelshekima there isnt.

Second flow
When on Temperature +10

If the light is off, it will be turn on.
If its already on you can change the light temperature in 10 step.

I am having difficulties in using the logic cards as I am using english.This is what I managed to do but I have a feeling that I am not using the right cards… 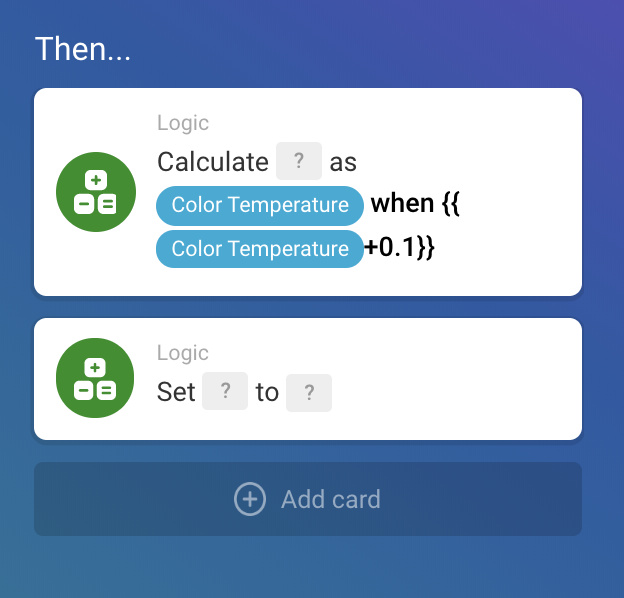 Cards are correct but did u first create the number variable in the “normal” logic settings like @Osorkon explained?
Then , at the questionmark in ur example from the first card, u can choose that variable u just made.
At the txt box u fill in {{taghere+0.1}}
Please do not use spaces here!

Indeed I had not set the variable.
Thanks to all of you. That works! It is awesome.

I dont have a remote and want to disconnect the hue lamps from the bridge.
Then connect them directly.

Is That possible? And how do i do this?