Homeyscript start a "Then" flow

Not sure if you mean something like this:
These scripts show all And & Then cards for your apps in script version.
There’s also an example. 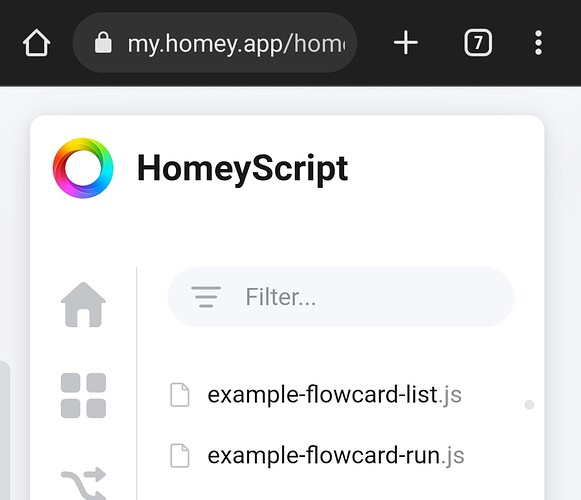 Yes, exactly what i needed. Was aware these exaples were there, but had no idea how to work with it. First attempt was bullseye;

But the second one doesn’t work, any idea?

second one doesn’t work, any idea?

Check Develop tools in your browser on test of a simple Flow:

This way You mean? Doesn’t work either

In theorie you only wrote the name wrong (the .catch() and .then() are optional), but I like the additional error catching and being able to do anything if the action card succeeded.

works great,thx. Out of curiosity; How do I know what is the right name? I had a little script which gave the name, but that name was wrong

I copied the name of the app from the app store (the URL).
Looks like it is based on that

I guess the regular name (i18n) is able to be changed thus not reliable.
Not sure if you can get it with a script, doesn’t look like it is in the app’s object.

When i open the link i find this:

Where did you find MQTT-Hub?

This is the full link
https://homey.app/en-us/app/nl.hdg.mqtt/MQTT-Hub/

Because i always on my iphone that’s the url i get. I tried with my laptop and in that case i get the full link. This is helpfull for the next time i want to script something.

In Firefor I open the app store with apps.athom.com and get redirected to Apps für Homey Pro
After selecting the app I’m on Home Assistant App für Homey | Homey