In several rooms I installed Philips Hue spots (bathroom: 6, bedroom: 9 and dining room: 10). In the wall switch I installed a Gira double momentary switch (Gira pulsdrukker 2v). This switch is connected to a Fibaro Dimmer 2. When clicking on one of the two switch buttons, a Homey flow is triggered turning the lights on if the lights are off.

The result is very inconsistent/unstable:

All problems happen in all rooms (i.e. different spots, dimmers and flows). Also the reverse flow (for turning lights off) have the same kind of result.

Some tests I performed to pinpoint the problem:

Does anyone know what is going wrong and what the solution would be?

Hi! Did you try to group the lights with the “< group >” app? I don’t know if it works, but I already saw this app mentionned in posts where similar problems where exposed…

I am using the Fibaro dimmer merely to make a “smart switch”.

I did grouped the lights in the Hue app via the Hue bridge and made those lights available via a scene. Is that what you mean?

No, I mean grouping the lights directly in Homey with the App “group” (just to test the sollution). Actually, you don’t really need the Hue app and the Hue Bridge (Homey works without the need of any bridge). But I confess that I don’t understand why “Testing the flow by using the homey app always gives a perfect result”… Something muss be wrong with the signal transmitted frome the Fibaro Dimmer…
Actually, I have exactly the same problem than you with two Hue Play and a Xiaomi Aqara Switch (round). Sometimes, juste on Hue Play is going ON or OFF, sometimes both (what I want). I’ll also test the app “group” solution those next days…

Initially I did not have the Hue bridge and grouped the Hue lights directly in the Homey app. This gave even more unstable results

Maybe your house is unstable on the ground, be careful

So nothing wired to the Dimmer2?

I use also the Hue Bridge and turn on/off lights in Homey by using the „room“ e.g. turn on light in sleeping room. This works perfect since years with a zwave.me switch.

In the bathroom a dumb light, in the other rooms a fibaro bypass.

And for the THEN part u use a card like this?

I have these two flows: 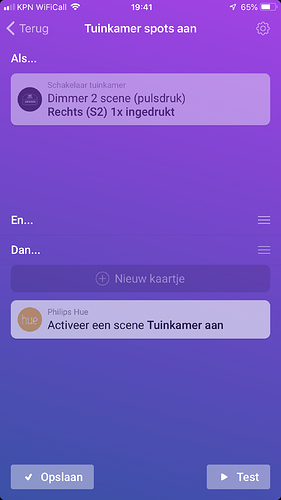 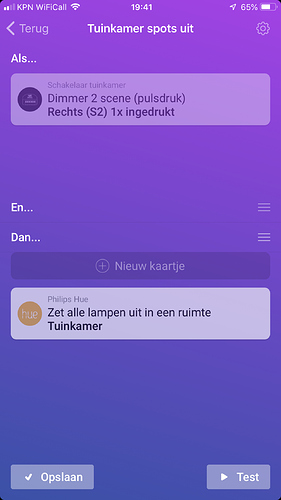 But but, it should. It’s the same trigger ur using aye?
U could use an AND card which states “Light is off”
So WHEN Rechts (S2) 1x ingedrukt AND lights are off THEN turn on, ELSE turn off.

That sounds promising. Did you also add the hue lights to your homey next to the hue bridge? Because I cannot find a similar AND card in the flow configurator. And, I see in your example also no Hue icon in this card.

Added all lights in Homey via the bridge yes. The AND card is from the light itself, the THEN cards are from the Hue app.

Thanks for the help!