Not as much of an issue for me when Devs are doing this in there own time, annoyingly the majority of the ones I’ve had issues with have been AthomBV apps, mainly LightwaveRF, Heatmiser and now DIO.

Agree about monetising the store though, compared to the price of major hardware, if the apps worked as well as the flows and software it would be worth paying for them.

Bridge bought, any links you have on the flashing/setup process would be most appreciated - found a few on google but if you have it working well will be worth following that one.

I likely will do this, just is an annoying amount of work, for something that was working perfectly 2 days ago.

To put it in perspective I have RF mood switches in every room in my house, each has 6 buttons which I had each setup as a socket using the DIO app (as each obviously transmits a different RF code) and when that socket was switched on or off, it triggered a certain flow. Now all the buttons do not work and can’t be re-added to the app as when using the RF remote copy it doesn’t find the switch transmission. 6 buttons x 7 switches - a lot has stopped working overnight.

I’ve had a lot of experience with RF., I use it a lot. The best thing I’ve found is to just not rely on an App to make them function , rather just use a really good universal RF remote learning system that just copies the remotes and plays them back.

It opens up a lot of new possibilities. You can buy any cheap RF gear from anywhere and not have to stress wether there is a compatible app for it…

Over the years I’ve found some fantastic cheap RF gear on AliExpress. Some that actually works better than the expensive main brands.

I never have to worry if they will work. I just record the codes, that’s it…

Just thinking is this going to work the other way? For receiving as well as transmission?

Bridge bought, any links you have on the flashing/setup process would be most appreciated - found a few on google but if you have it working well will be worth following that one.

Will give a brief run down tomorrow.

In the meantime lookup the guides on YouTube., You’ll need to also buy a cheap USB to serial interface to upload the firmware onto the SonOff.

There is also an option for you to just buy a Broadlink Pro instead. It would be easy (no hardware flashing) but with the Tasmota / SonOff combo I’ve found it to be a lot more compatible in reading codes from obscure or proprietary RF devices … (not including rolling codes)…

It’s also a shame that most apps downloaded are on auto update by itself.

Agreed!
Additionally, if someone happens to have the HCS app installed (pro only), there’s a nice central control panel for update settings 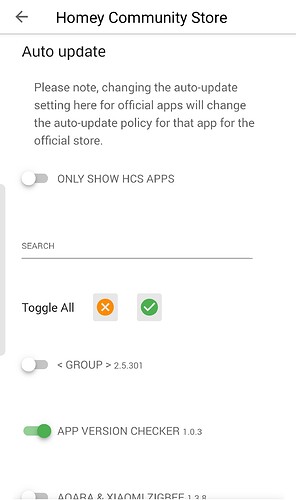 From what I can see this will only allow me to transmit RF and not receive, which still renders my light switches useless 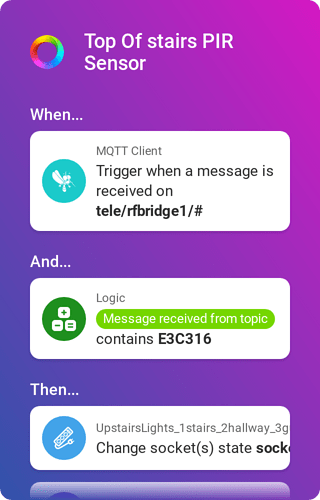 Just change “E3C316” in the logic card to what ever RF code you want to listen out for. 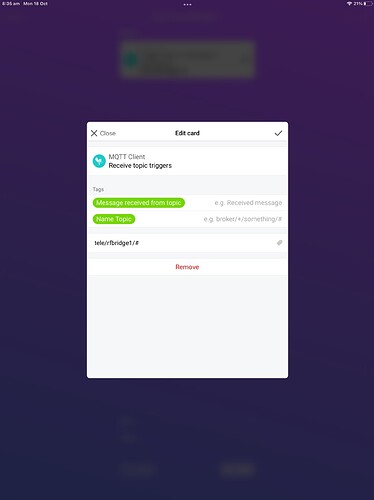 Change “ rfbridge1” to the MQTT topic name that you create for your SonOff Rf bridge ….(if you end up using one)

Cheers Russell, bridge is arriving today so once I’ve flashed it will give this a go.

Cool. Once you flash it with Tasmota also do a secondary flash of the RF chip using a firmware called “Portisch” 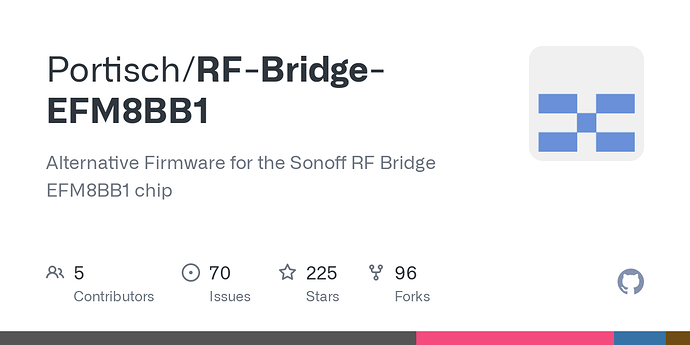 It will give it a lot more features and control. Also allows for capturing / sending raw data …

Perfect, got Tasmota/Portisch flashed, MQTT setup, MQTT client working on homey, can SSH into my Pi and trigger flows using MQTT test messages from the command line, but can’t see how to get Tasmota to forward any RF signals it receives through MQTT?

Ok seem to have resolved that now, they’re coming through on the RESULT topic, but I’m not getting RF Codes like yours I’m getting strings of letters like so: (this is all one button press)

Heres an example of one I use for transmit… Don’t forget the raw 0 command at the end.

rfraw 0 Turns off raw mode and puts the RF bridge back into normal mode after each transmission otherwise it just stays in raw mode. 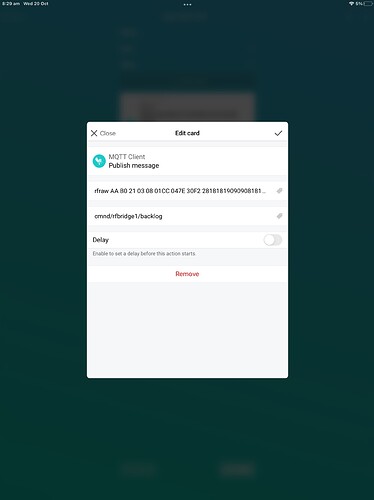 I’m not sure I’m following, I’m meaning when I use a press a remote button and I set Homey to receive the MQTT based on that code - yours seems to be a short 6 digit Hex Code but I’m getting the above, loads of raw data?

Yep, if you read my last posts your Rf bridge is always stuck in raw mode as your not putting “Raw O” at the end of each MQTT command that you send so the bridge is able to revert back to normal after each RF transmission.

You always want the bridge to be in normal mode while listening out for RF commands.

When transmitting RF code you want it to activate raw mode , send the payload , then close raw mode.

Raw mode is only used for transmitting…

I’ve not tried to transmit anything yet, only receive, but while I assume my rfbridge is in normal mode, when I press a button on a RF remote, nothing appears in the console, and nothing is sent by MQTT. Is there a command I need to use to get these RF signals to show/send?

Sorry , I had assumed you were still in raw mode.

Are you sure the test device is working ok ? Try another … You should see info pop up in the console when ever there is RF activity…

Also did the flashing of the RF chip go ok… ?

Flashing of the chip worked fine both Tasmota and Portisch, can put it in raw mode using rfraw 177 and see the codes, but when I turn it off I get nothing, tried a few different devices.