Hello, I just received a newsletter from Athom providing one article about motion sensors: Find the Best Motion Sensors for Your Smart Home in 2021 | Best Buy Guide
Here they write about several motion sensors, that were tested and say “…you have nothing to worry about with Homey Bridge and Homey Pro, both of which…”.

One of the motion sensors in the list Athom tested is the Philips Hue Motion Sensor . Unfortunately in my Homey Bridge I can’t connect to that sensor, which is already connected to my Hue Bride (which also is connected to Homey Bridge).

Does someone have an idea how to connect that motion sensor to be available for flows then?

Thanks for your help!
Sebastian

Does someone have an idea how to connect that motion sensor to be available for flows then?

At the moment that’s simply not possible with Homey Cloud/Bridge, regardless of what Athom says in their marketing material.

Additional, you can see for yourself in the appstore. View the differences by hitting the Pro or Beta button. 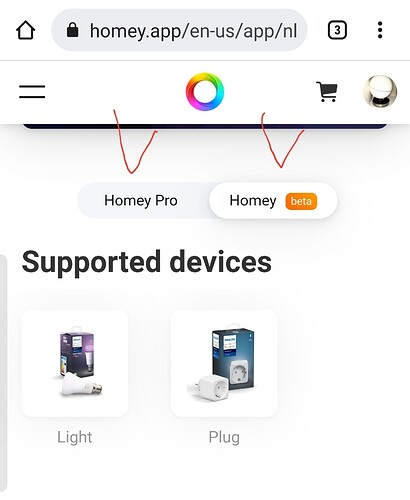 That doesn’t build a lot of confidence when there are false information out for sales reasons. Or does one end of the company just doesn’t know what the other is doing? Strange…

Thanks Peter, I had seen that but was irritated about Athom’s announcement. So I thought I did something wrong…

Thank you for contacting Athom support.
Sadly it is not possible to add your Hue motion sensor due to the Homey bridge due to the limitations of the sensor.
I do agree that this is something that is not explained very well in the article you have send me and requested our marketing team to make a mention of this.

This all sounds pretty disappointing. I honestly don’t think the sensor has limitations either. Because in Homey Pro the sensor also works…

due to the limitations of the sensor.

That sounds like a load of @#&)€=#. This is Athom’s choice to link to the Hue bridge and not have an app to link it straight to the Homey bridge. And even with the Hue bridge, it is all about server load, not sensor limitations. Their current Hue implementation requires polling to get sensor data, which asks lot of data to be transferred. I even think they could write a better implementation if they wanted to.

thanks for those intresting insights!

I thought, by paying $ 3 extra every month for the using of their server they can provide me an adequate performance to deal with those continous sensor data…

So I guess the only optoin is to get rid of the Bridge and use Homey Pro!?

I think Pro would serve you a lot better if you like home automation. And if it doesn’t serve you well, then the bridge most certainly won’t.

That’s no good news for me. I just bought the bridge and am an enormous HUE fan…

Just randomly dropping some feedback here on the way I resoled the issue of not being able to hook up the Philips hue motion sensors to Homey bridge directly:
In the hue ecosystem, set up your sensors as you like and have then trigger a hue light in the same virtual ‘room’. You can then use this light as a relay, since Homey bridge can detect the state change of this light. This state change can then be used as a trigger for any flow. Keep in mind that this relay light needs to be dedicated to the purpose of relaying the state of the motion detectors, so you can not switch it on or off by any other means or it will trigger the flow that the sensor was supposed to trigger. You get the idea…

Hello, new to Homey and am fast discovering that it doesnt seem to be the answer to all my problems.

Wondering if you ever got this resolved without the use of a light acting as a trigger?

Madness that the hue motion sensors cannot be discovered via the hue bridge.

I’ve also found another limitation. I’ll start a new thread for this.

Hello Colin,
I never resolved that problem and after also having other issues that never really worked I decided to sell my Homey systems (also my Pro) and switched to Home Assistant (using this for 10 months now happily).
Regards
Sebastian

I have a few Philips motion sensors, connected to the Hue bridge.
But since I can’t use them with Homey bridge, i have switched in some rooms to these cheap Aqara motion sensors, up until now, they work pretty good