And u made a request for this alr?

I understand… Let me know if I can test something for you!

Ah, thx!
I got the wrong one then. Took the latest version number. But got a black colour.
Thx!

But got a black colour

Mind u: even the red ones are black!

Mind u: even the red ones are black!

Hmmm, now I am confused (again

How do I distinguish which one I have then?

If u cannot add it to the e-control app then u have the red bean. If u can add it it’s the black version. In Homey apps u get an error with something like “strange device found, 5f36” for the red bean version.

I could add it to both the BroadlinkRed app as to the official app from the Homey Store.

The e-control (Android) app complain it it designed for an older Android version. It hasn’t been updated since 2018 too, according to the Android Appstore.
Already had the BroadLink Android app which is functioning fine.

Any other way to distinguish the two?

I have another variant 27DE, it this should be consider red too, hope @Pieterv123 able to add this too.

Any other way to distinguish the two?

This is mine…
Can we tell something out of this pic? 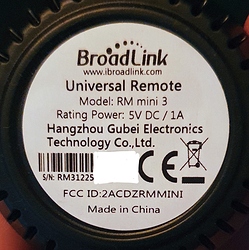 I have two variant of “red” 27DE and “red” 5f36 have same label sticker similar as yours, except one with missing CE & FCC ID

I don’t have a “black” one to compare.

Physically both called “Black/Red” are all black in color, cant tell.

If i have “black” one, probably will tear down the 3 variants to compare the chipset.

I will try next week, but just add it as unknown. Should work too, I think 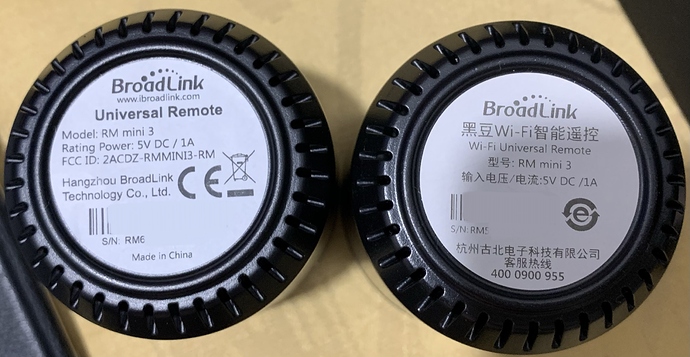 Just to share with the community with better understanding:
Both are RM3 mini , physically black in body.
But this RM3 mini aka known “Red” variants
Left : 5F36 for sale outside China market (CE label)
Right : 27DE for sale in mainland China (e Label)

Both 27DE &5F36 only compatible with new BroadLink Application.

Where would I be able to see it then?
Don’t see it in the Homey Store App and not in the Android Broadlink app…

Using the Official Homey app store - Broadlink App, try add your RM3 mini.
If it successful, it is the “Black” else there will be an error such as **"Found another device: unknown (XXXX) ** "

Then it must be the black version, since it shows up as a known device…
Thx