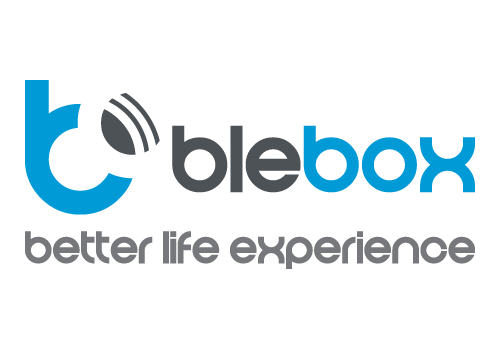 Blebox.eu is a brand of high-quality products related to home automation. Created in 2013 by authors of the “Polish Invention of the year 2014” and 30 other technological and product innovations. Within 3 years it has evolved from a local start-up to an international company which provides innovative products to more than 20 countries of the world, including China.

At the moment this app supports the following devices:

- BREAKING CHANGES: due to fundamental changes in the app, recreation of all devices is REQUIRED!

Hi @Piotr_Grochowski, do you know if the SwitchBox can be used to monitor the energy production of a small PV system (max. 600 W)?

Hello,
I don’t know that but I’ll ask my contact @ Blebox.

I’ve got the info - no, it’s not possible with a switchBox to monitor energy production of a PV system.

That’s too bad, because I already use your BleBox app and I wanted to avoid installing another app, e.g. Shelly or MyStrom, just for energy metering of the PV system.
Thank you very much for your support.

Hi @Piotr_Grochowski,
Some time ago you helped me to integrate the BleBox proxiBox into Homey using the HTTP request flow cards app.
Because the HTTP request flow cards app, as of today, is not updated to SDK3 and I only use this app for this one use case, I am looking for another solution.
Do you know another way, another solution to switch a lamp integrated in Homey with the proxiBox?
Thanks in advance!

Edit
I guess I found a solution.
If I understand it correctly, the proxiBox can be connected to other BleBox devices (via WiFi and/or wire) and then turn them on or off. Therefore I ordered a wLightBoxS v2. The wLightBoxS will then replace the current LED driver (ZigBee).
So I can delete 2 apps, the HTTP request app and the app for the Zigbee LED driver (only one device is connected).
I will inform you, if it will work.

Yes, it will work.
BUT using HTTP request flow cards adds more possibilities.
E.g. you may create a flow that will differentiate dim level of your LEDs depending on time of the day (e.g. 100% during the day, 5% during night) and fire it using proxibox.

I looked again in the manual of the proxiBox and the wLightBoxS and I guess it’s not possible to connect both via wire. With exception of the switchBox DC, which has a separate switch input, the other bleBox devices can probably only be controlled with the proxiBox via the wBox app (WiFi connection).
Accordingly, such day/night automations could only be done with the original wBox smartphone app, if it has such features (I haven’t checked yet).
But actually it is not very bad that I can not realize such automations via Homey, because the LED strip is actually always only switched on/off and not dimmed. And for this, a simple automation in the wBox app is enough.

Yes, you’re right. As long as the app is not uninstalled, it will still work. However, another goal is/was to reduce the number of installed apps. However, I hope that the new Homey Pro can handle more apps than the current Pro…

Hello,
You can’t wire proxiBox with anything. It does not have any output!
It’s only possible to control other devices with WiFi connection - in the same way you connected proxiBox with Homey. BTW. you don’t need wBox app to do that, webbrowser is enough.
Day/Night automations can NOT be done with original wBox app. This can be done ONLY with Homey Pro (and HTTP request app). I use it in this way.

You can’t wire proxiBox with anything.

You’re right, I had looked at the wrong manual and mixed it up with the proxiSwitch.
I think I wrote a lot of bs, sorry.

The online store sent a wLightBox v2 (4 channel) instead of a wLightBoxS v2 (1 channel).
The customer service told me to try if it is possible to control only 1 channel with it. If that didn’t work, he would exchange the device for me.

It’s only possible with this flow:

Another problem, there are no action flow cards available to set the dim-level level:
– Dim to %
– Set relative dim-level %

Request
Since I want to use the wLightBox for another use case with an RGBW LED strip, it would be nice to be able to start the effects via Homey Flow.
Would it be possible to implement it? 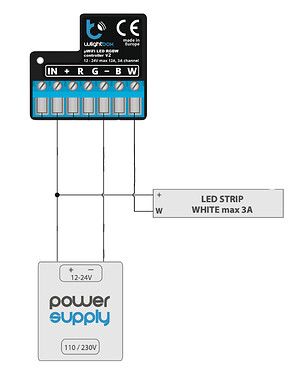 And what are your wlightbox settings in Homey?
Especially ON value.

The ON value field was empty. Didn’t know that this field must be filled, and with what. A description of this field should definitely helpful. Now it works as it should, with the on/off button and with a flow (turn on).

I’ll add the description. The ON value is the value of all the channels used by wLightBox in format: RRGGBBWW - where RR is red channel, GG is green channel, BB is blue channel and WW is white channel. Every channel is a HEXadecimal value between 00 and FF. So 000000FF sends FF to white channel and 00 to all the other.

Today I received the wLightBoxS v2 (1 channel) and it works like charm. Also the Dim level on ON is a nice feature. Maybe you can add this also to the wLightBox?
I also managed to turn the wLightBoxS on and off via the proxiBox without using the HTTP request flow cards app. That was all I wanted.

I disabled the HTTP request flow cards app and did not delete it. Maybe I will need the app at some point after all.

Hello,
That’s what I’ve written before - you can connect wLightBox/wLightBoxS with proxyBox with WiFi, but you can’t do day/night dim difference with that connection (that can be done with Homey).

That’s what I’ve written before - you can connect wLightBox/wLightBoxS with proxyBox with WiFi, but you can’t do day/night dim difference with that connection (that can be done with Homey).

I am aware of that, I just wanted to share that I made it. And I did it with a Polish manual (I’m from Germany).

“ON value” is for 4 channels (as wLightBox is 4 channel).

I can’t try it anymore because I already uninstalled the wLightBox, but is the “ON value” of the wLightBox only just for color, and the dim-level is always 100 %? Or is it possible to set also the dim-level with the HEXadecimal value?

Hi Piotr,
Just received my first Blebox device, but forgot to check if it was supported by your app….

So my new ShutterboxDC is working very well with the original BleBox IOS-app, but ofcourse I would like to add it to homey.
Do you have any idea when you are able to add support for this shutterbox DC?