To say the least!

I have got so many backup flows to check for stuff, i didn’t even notice that couple of cards were not functioning at all.
Like a trigger-triggercard.

That’s why i always want a few testers!

Thanks you @HuisCHovens for the Bugz report!

I have a new version in test, very well tested: I created all cards i can think of specificly, and devices.

is it actually possible to easily change names without damaging flows and hassle with import export?

Well, you can change the names within flows easy, but you need to change it yourself.

I still want to add a function to The Flow Exchange(r) so you can update your own flows (and not create new ones).
That way, you could change a BetterLogic variable with one change in all flows it is in, as tag or as flowcard-argument.

But i need some time for that.

I still want to add a function to The Flow Exchange(r) so you can update your own flows (and not create new ones).

Would be ideal for re-connecting devices.
Issues is: TFE only handles Advanced Flows right now, not normal flows.
Thats why implementing it takes some time.

Okay, test is looking good, im not recieving any errors.
(considering that the original app had 264110 errors in it’s log when it got transferred, i would say, it looks like a good version.

But, there are only 9 test versions installed, imho way to low considering the userbase.

So, anyone wants to test the new Better Logic version, with In-Flow-Variables-Creation?

The first test failed on me

I tried to create a new (standard) flow. The trigger card is a Better Logic card with a variable I wanted to create ‘on the spot’. But that does not work (for me).

This trigger does also not except to make a variable on the spot: 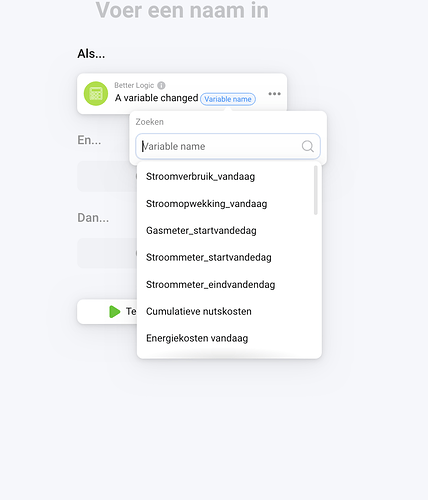 In the AND section, it does work 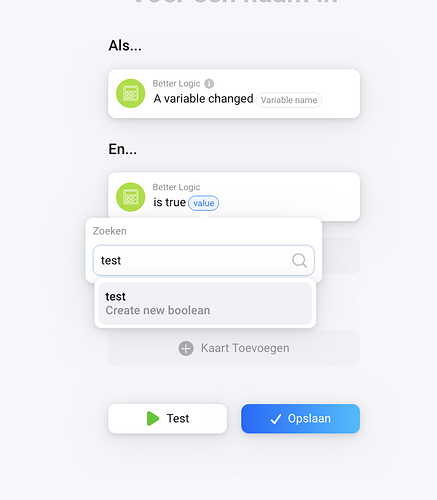 This trigger does also not except to make a variable on the spot:

No, im sorry, Better Logic only has one Trigger/When card for when a Variable changed.
So, if you would be able to create it there, there is absolutly no way the app/i can know what kind of variable you want to make.
I am thinking about adding extra When cards for Trigger/Text/Number/Boolean, but i am not sure.

When i was thinking about adding a camera variable, i realized:
The more i am updating BL and working more intens with it, the more i realize that, afaik right now, everything that can be done with Better Logic, can be done with the Advanced Virtual Devices from Device Capabilities.
You can add yes-no/text/number/trigger/button/lists/camera fields and put Create Tags on.
Now you have the exact same thing as BL has, except the tags are grouped in a device instead of the app.

So i am not sure which way i will go with BL. But i did want to add the in-flow-cariables-creation where it was possbible: every flowcard which is for a specific variable type.

I have just improved the Store Description and the (one-time) Notification (you got a notification in the Homey App right?)

I use both apps and really love them. But for me there is a difference.
When I want to see the variable in devices I’ll make it with AD. But when I want to make a hidden variable or do something where I need a variable its BL

Yeah, i indeed need to add a Hidden option to all ShowAs lists.

And have the option of creating those fields (as hidden+tag=variables) directly from the flowcards, just like BL now has (and Countdown, Advanced Triggers, JSON Handler).

Okay, i have just release version 1.4.5 to live.
Let’s hope it all goes well

Any suggestions. Works fine until the update.
I use this kind of logic in a lot of scripts. All not working anymore.

Ill look into it right now!

Any suggestions. Works fine until the update.
I use this kind of logic in a lot of scripts. All not working anymore.

Sorry about that m8, i made an error in updating to SDK3.
It is resolved in the current test version, waiting for review by Athom.

No problem. Thanks for the fast fix. I wait for the reviewed version.

So reading your considerations, what do you think is the added value of Better Logic compared to the Homey Logics in combination with Virtual Devices+Device Capabilities? Is it the (large) installed base only, so new users have no point in installing BL?
Orndoes BL really has some extras that cannot be found in Homey Logics already en other, recently developed apps?

In the meantime: keep up the goodwork.

Orndoes BL really has some extras that cannot be found in Homey Logics already en other, recently developed apps?

Well, i did think about that.
Altho i don’t see any other app that does what BL does in a very simple way.
I know Temporary Variables, but that is just the same that buildin cards can do, nothing else.

I do plan to add Scoped variables to Better Logic, so you can recombine flowcards with different tags into one tag

And BL has a few easy to use devices that cover variables.

And, also, i guess one of the most important things; BL has a Variable is SET card. Homey does not.
And it’s kind of important for at least some users like me.

F.i. If you have a Google Says variable and it says Diner!.
What if a day nothing else is said, and then again the variable is filled with Diner!.

With default Homey logic, nothing will happen.

Point taken. I recently switched from BL to Homey Logic. I’ll have to reconsider now…
Thanks.
Paul

Also, one for me and many other developers, a big thing: app(developers) may not access/write/create variables.
But with BL, you can!

You can even update and read the variables through the App API.
This means also that you can use and update BL variables within HomeyScripts.
You cannot (may not) do this with default logic at all!

Not only does the Delete All has a confirmation before execution, the single delete button (right above the edit and save

) now also has a confirmation (Yes/No) before deleting a variable or countdown.