v2.0.5 is awaiting approval, apparently i missed removing 2 characters when fixing the multiple driver issues, crashing the app (only effects if you have the Stella valves, also the reason why i didn’t notice before submitting, as i don’t have the Stella).
Really though i removed them as i did remove them from the Comet (which was a copy paste bit of code), but apparently not

@Eternity Sure, although the situation might be very specific. Am using a heatpump + buffer vessel to heat the house. As soon as all thermostats are in fully closed position (0 % open), I have a flow stopping the circulation pump to these thermostats. This will prevent a loss of heat in the circulation line itself, thus preventing the heatpump to switch on to compensate for that loss. That is also the reason why I am using the manual mode. In the other modes, the valves stay open for a certain % (afaik) creating a constant flow in the circulation line, making the heatpump switch on and off frequently. In manual mode I can control the valves and the circulation pump. Hope this is clear and helps.

Since 2 days the Z-Wave range of the Thermostats reduced. Dunno how that is possible but it happened.

that is unfortunately(?) not something the app can cause/do/help though.
Have you tried to PTP (pull the plug) homey for several minutes?

@Mario_Me and you already had contact with Athom support I suppose?

I discovered an unknown node which def is no device. It’s (another) known bug as it’s not possible to remove these unknown nodes in v2.0.
Not sure if this has something to do w/ it.

As auto updates are completely disabled I will try a bit around and if it will screw up tomorrow again I’ll contact the guys over there.

Hope this is clear and helps.

@osiiris
Thank you for explaining this. Makes sense now!

Sorry for the confusion but I didn’t use the external measurement in combination with the Spirit. It was just an analogue (offline) measurement. Did toggle the external measurement toggle on and off again just to see if it would trigger the sending of new data, but the app still reports all the Spirits at the same temperature (the data in the app seems to be frozen). Is there a way to determine whether the Spirits do not send updated info or that the app/Homey is not processing the data?

Thanks for all your hard work Caseda! No yet implemented a multizone heating solution, but the Eurotronic Spirit radiator valves caught my eye.

Bit off-topic, but does anyone use them together with the Plugwise Anna thermostat? Thinking of bundling both products to create a multizone heating solution.
Not worried about putting some effort in to get things up and running, but I do seek a stable solution as an end result. Combining everything seems to provide all the options to get my flows configured to my wishes (geofencing through Homey/Owntracks, adaptive multizone heating through motion sensors, efficient heating by shutting valves on non occupied rooms).
Will this be a viable option, or would a multizone heating solution like this still be an ongoing project?

I have just bought Homey and tried to install first devices, including Eurotronic Sprit thermostat valve.

However when I tried to install the Eurotronic App via “Add new device” in Homey, I got an error “The app could not be installed” on the red background. When I tried installing it via apps.athom.com, I got “This app is incompatible with Homey”.

What’s wrong? How should I debug those problems? 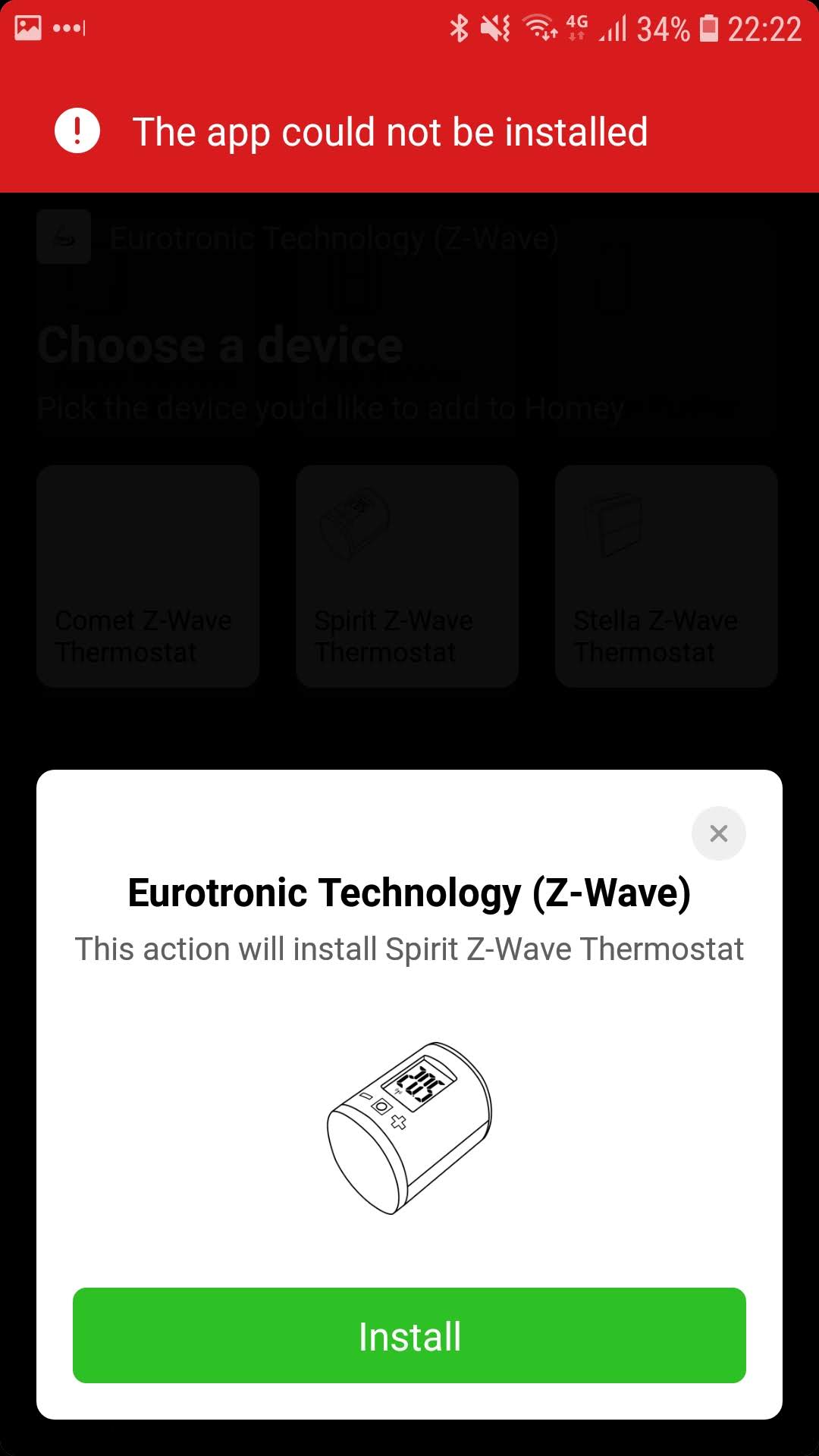 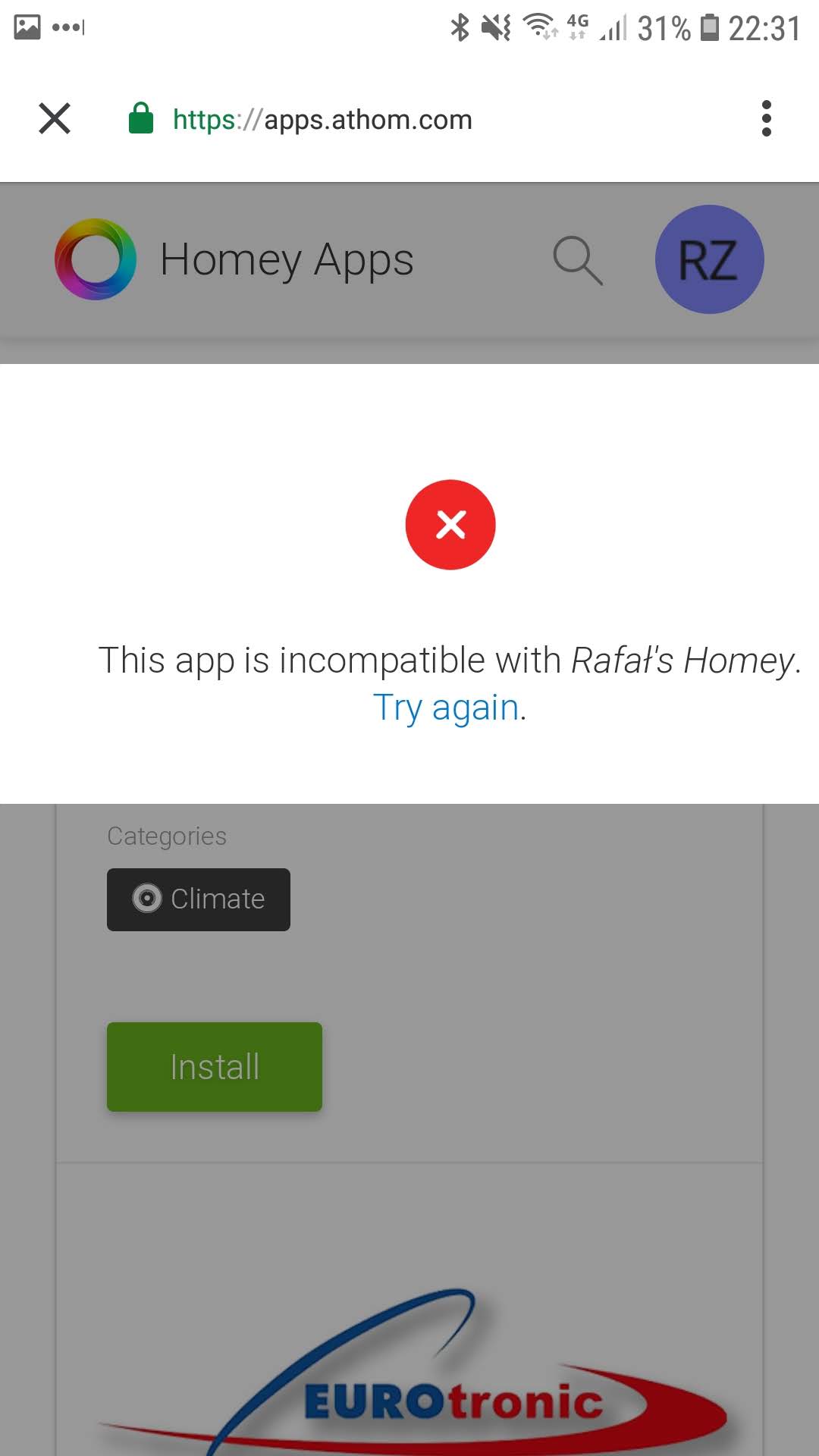 The original app was Published before the Homey 2.0 release,
The developer has update the app and published a beta version click on the link below the logo to switch to the beta or wait until that one is released as stable.

I am running 8 Spirits on an Indigo HA and the battery update after changing batteries is a bit flakey.

It appears that the spirit only reports battery once a day and it seems to take some time to catch up the change.

Just migrating all my Spirits and Secure/Horstmann Thermostats across into Homey.

If I understand correctly - Set the Spirit to use External Temp Sensor (in my case a Secure RT321) and I set up the association in the Rt321 by adding the Spirit Node ID to the Group that Homey sits in, ie add ",21) for node 21 for the RT321.

Then the Spirit will use that Temperature as the room temp.

Is it best practice to manage Demand by adding another association on the Secure RT321 to the Secure Boiler controller, so that it drives demand or better just to let a Homey (or Homey App) to control boiler on/off?

I can see merits in both options.

I exactly want to do this myself, including multizones. So combinating Homey V2 with Anna and the Spirit valves. Did you get any further with your approach?