I’m new to the Homey Alexa Skill but find it a very useful work around to Homey’s non existent support for limiting 2nd user/non technical family members, so have just spent some time setting it up.

Most of the time has been deleting dozens of redundant discovered devices (e.g. the second, unused switch from a Fibaro double relay, boiler demand relays, multinlsensors, etc.)

That’s about 45 ok f the 120 devices discovered, and not really problematic until I add or replace a new device to Homey, whereupon, it seems I have to discover all the devices again - including those already added and delete all the redundant ones again…one at a time, 5 clicks each.

I thought maybe disabling them instead of deleting them might work, but that leaves my users with a list of meaningless random devices.

Does anyone know if when adding one new device to Homey, only previously not discovered devices shows up in the Alexa discovery?

Rename and disable the devices rather the delete.

Thanks for your reply, but if I disable them they still appear in the list. Even if renamed they’re still confusing.

Well, it seems the Homey “skill” is refreshed periodically [by itself/ the Alexa app?] which re-adds to Alexa devices previously deleted, which compounds the issue.

I since discovered they can be removed by logging in here: https://alexa.amazon.co.uk/spa/index.html#appliances

…but that only lasts as long as the next automatic refresh. 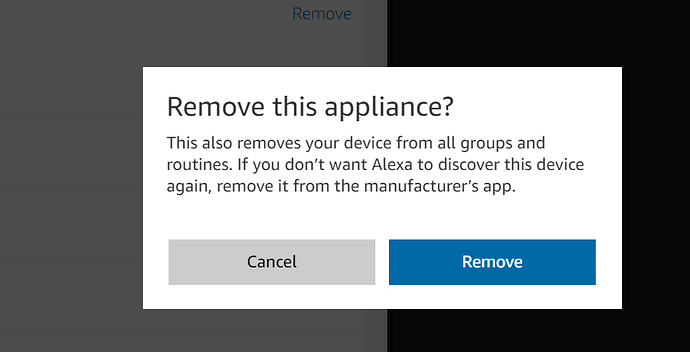 Does anyone know how to get in touch with the Homey ‘Skill’ developers?