Advice with Advanced Flows - allow only to happen each hour

Using another home automation hub I was able to trigger an Air Wick spray to operate once per hour when motion was detected in the room.

So a Hue Motion Sensor (using Hue App) triggers on motion turn on a plug then through a battery eliminator power up the AirWick Spray. It would then auto turn off after 60 seconds the Pause for 59 minutes.

This Pause meant that the Airwick spray could only fire once per hour - or any other duration set in the Pause.

Will this work in the Advanced Flow - will a delay cause the whole Flow to freeze for an hour?

ie will this work as described above? 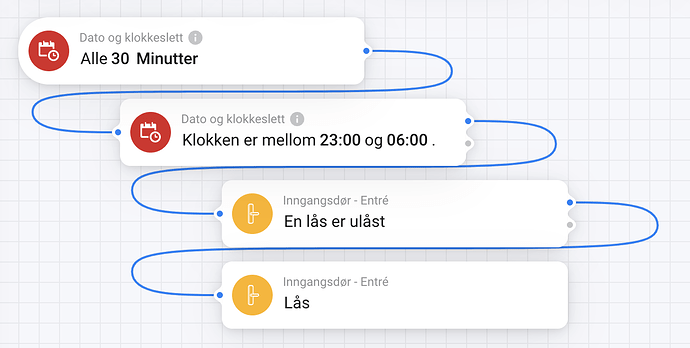 Replace the “59m” delay for a timer. I use Chronograph f.i.
It would be the card: Then "Start or replace timer ‘pause_airwick’ " (just any name)
Set the timer to 59 minutes.

Between card ‘motion alarm on’ and 'turn on Hall airwick, place the AND card ‘Timer pause_airwick is not running’

will a delay cause the whole Flow to freeze for an hour?

When…
– Motion alarm turned on

And…
– Timer “Airwick” is not running

The And… card Timer “Airwick” is not running prevents the flow from passing through at every movement. If a new movement is detected AND the “Airwick” timer no longer runs (i.e. after at least 60 minutes), the “Airwick” is switched on again.

The second AND is redundant isn’t it if I put the start Chronograph timer last.

Actually come across another one I a trying to figures out.

Does this have to be managed in TWO different Advanced Flows?

I wonder if this will work?

@Busta999 Do you also have another flow were you say that the energy is cheap?
When the energy changes it will not always be cheap.
Where you say > €0,20 kWh is cheap.

What are the 5 minutes delay for? They have no function in this flow.

Correct!! I have removed it, it was a remnant of another idea

Yes, I have another flow that sets Cheap rate to True and sets the value to 7.5p kWh, when Cheap rate not available it will switch to FALSE. And the rate moves to 35p kWh.

Somewhat moot as I will always be on cheap rate from end of next week, but the TRUE/FALSE indicator will still be useful as it moves a lot of devices energy usage to Grid cheap rate rather than battery cheap rate.

I think the second step should be “timer is NOT running”. or replace the first one with “when timer has ended” AND movement alarm is on.

or replace the first one with “when timer has ended” AND movement alarm is on.

And what should start the flow?
The flow as it is does exactly what it is supposed to.