Advanced Flow ALL not triggering

Sorry to be a noob but I’m struggling again with an ALL logic in Advanced Flow. In my screen shot you can see two “routes” into an ALL block.

If I test the “yellow” block, everything works fine and the line into the ALL block lights up.

If I test the “red” block, everything works fine and the line into the ALL block lights up.

Because I can’t test multiple triggers simultaneously, I switch to the real world. I have put notifications before the ALL block so that I am certain both yellow and red routes in are being triggered, but the THEN actions after the ALL block are not happening.

I have also tried disconnecting all the other THEN actions and conditions from the yellow block and still nothing.

What am I missing? 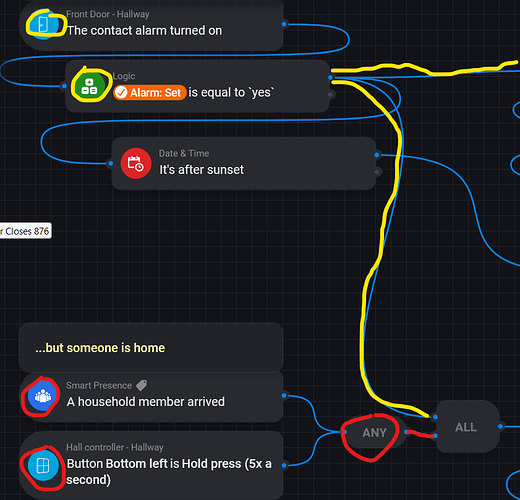 You can’t have several triggers to the same all block. A new trigger will fire a new instance of the flow.

Really? I had really hoped that advanced flows were going to help avoid the need for intermittent variables or virtual switches. It seems not.

Thanks for the education though

So my follow-up here: why would I use a Virtual Switch over a Yes/No variable and vice-versa? What are the advantages and disadvantages of both approaches?

How should multiple triggers be fired absolutely simultaneously? That has nothing to do with AF, that is generally not possible.

You can use the Any card for multiple triggers

No, I wasn’t seeking simultaneous firing.

I had assumed that when “all” the conditions of the all-block were met the flow would continue. This would be consistent with the way the any-block works.

There’s a perfectly legitimate logic to my thinking, but I guess it’s not the same logic used in the design of AF. That’s fine, different approaches and I’ll adjust to what I’m given.

Any suggestions as to the practical difference between using a virtual switch and a variable to store a “state”?