OK, this should be really simple, but I’m still struggling with this…

The scenario is simple:

So my flows work as long as I’m in the bathroom for less than 5 minutes, or standing still for 5 minutes.
(Actually as long there is no movement for 120 sec (the setting “Disable Motion Alarm After” - 120 sec) and I move after this the inactive count for 5 minutes “resets”)

However, when I am in the bathroom for more than 5 minutes (and moving around) the lights still turn off.
Looking at the Aqara sensor in Homey App I see that it’s motion alarm is turned on during this time.

I have a theory that Homey Inactive only reads state and not motion…?
I.e. if the state (motion alarm) = on (or yes) for the set amount of time, in this case 5 minutes, it goes inactive as the state (on/off, yes/no, true/false) has not changed?
Can anyone confirm this theory?

The flows are:
Bathroom turn ON: 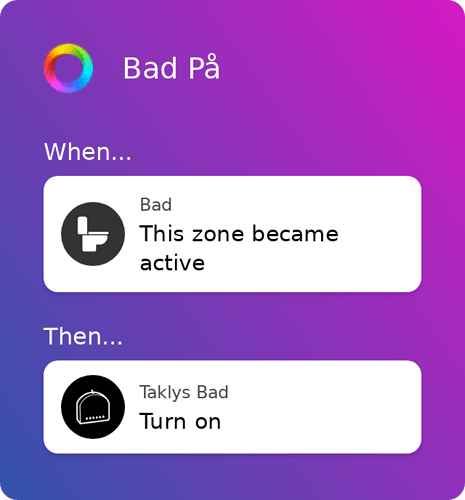 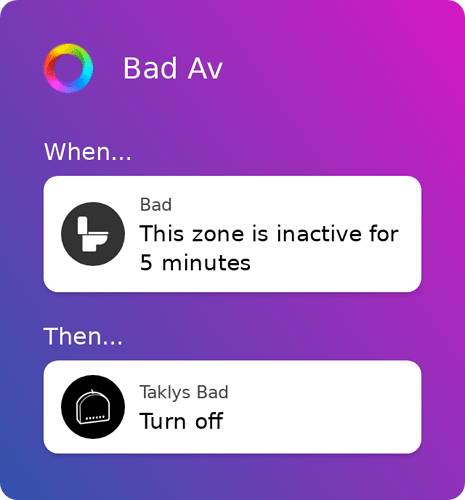 To achieve what you want, you need the app “Chronograph”.
Two flows are then necessary:

Flow 1:
When:
The zone becomes active
And:
The brightness is less than xx
Then:
Switch on light
Start or replace chronograph timer (name) with a length of xx minutes

Flow 2:
When:
Chronograph Timer (name) has expired
Then:
switch off light

I also use Chronograph instead of Countdown

Sorry @Undertaker and @Peter_Kawa, but in my opinion your answers are not very helpful, because the real problem is not solved.
I myself have two rooms in use with “Becomes active” and “Is inactive for x minutes”, and they work fine.
For example this flow:

However, I have NEO Coolcam motion sensors in use with a motion cancellation delay of 30 s. I don’t have an Aqara Motion Sensor in use, so I can’t comment anything about the settings and behavior, but normally his flows should work. So why always these workarounds?
Btw, maybe Tom is using the Homey Bridge, in which case he wouldn’t be able to use the Chronograph app at all.

Zone activity puts me in the dark sometimes. That’s the odd part. It does not function all the time, but sometimes it does as we should expect from zone activity.
So I rather use the timer option, then the light does not turn off when the inactivity time has been reached while there’s still movement.

About having a homey cloud/bridge or not, I’ve stopped asking when users don’t mention it.

Unfortunately, I have not had good experiences with the zone activity in terms of reliability either. Yes, actually the flows described above should work, but they don’t with him !
My example with the Chronograph app always works.

My flows have been working for months without any problems. So if your flows doesn’t work as they should, did you contacted Athom?

Based on the description it seems that is a reproducible error. Therefore, I suspect that the problem is with the Aqara motion sensor. For example, I know that the lux value is only sent when motion is detected. How the Aqara Motion Sensor works on motion detection, I do not know.

However, when I am in the bathroom for more than 5 minutes (and moving around) the lights still turn off.

@Tom_Erik, please check in the Homey smartphone app, if the zone is active or inactive when the lights turn off.

Have also tried with the (Aeotec) Smartthings motion sensor and the Aeotec Multisensor 6 - same problem.

My current theory is that Homey’s inactive card doesn’t actually check motion but only change in state
This again means that as long as a motion sensor (of any kind) is constantly triggered as ON/YES/TRUE etc because of constant movement registered by sensor, the state never changes.
Since the state doesn’t change Homey counts this as inactivity because no change in state happened, right?

Perhaps you guys could do a test for me?
Make a similar simple flow like mine and move constantly within the time limit of the inactive zone and see if the light turns off for you as well…? Would be helpful to eliminate that it is not my sensors that are broken…

Could you try the following in your setup here?

What I already did is, I created this test flow:

image1180×244 43.3 KB
I activated the zone and I moved continuously around for about 2 minutes, so that the motion sensor was activated (yellow exclamation mark) all the time. The light didn’t switched off.
After the approximate 2 minutes, I left the zone and observed in the Homey smartphone app when the motion sensor became inactive (after about 30 s). After another 60 seconds, the light turned off.
So everything as it should work.

Could you try the following in your setup here?

I can also try this, but…

(so that you are well within the 30 second cancellation delay)

Therefore, it would probably make more sense that this test is performed under identical conditions (Zigbee Motion Sensor). For this, someone else has to perform this test. What do you think?

Hi @Tom_Erik,
today I did your test and the Zone Activation works as it should.
After the last movement it takes approx. 90 seconds for the light to go out (30 s cancellation time + 60 s inactivity).