I have two Fibaro FGS-222 double relays. The are both used as potential free relays. One only has the primary relays connected (second channel is not used). The other did too, but today I connected the second channel of that 222.

Now, when I use the Homey App to switch that second channel ON, it switches ON and immediately switches OFF again. I thought it must have automatic switching of (with a short delay) set to ON. But that value is 0.

I checked the other settings and compared them with the other 222 (of which I can switch ON / OFF the relay’s second channel). All settings are the same.

What could be wrong here?

Had that issue when installing. Double check your wiring, you most likely missed something there. 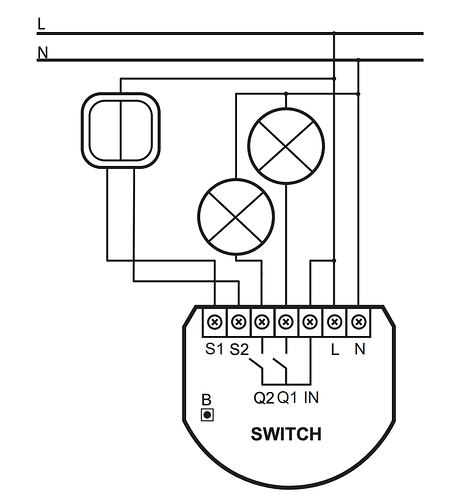 I have not connected the L with the IN (COMMON).

Potential free switching is between IN and Q1 (that works). How to use the second relay? Use the IN and Q2?

Yes, IN for both Q1 and Q2 the input, they can’t be fully seperated (like the drawing you show already states), so only possible if the input can be same.

If you haven’t connected the IN, there is no power entering to go to Q1/Q2.
The L is only to power the module.

Yes, IN for both Q1 and Q2 the input, they can’t be fully seperated (like the drawing you show already states), so only possible if the input can be same.

That’s how I have connected it. But the second relay switches off immediatelly after manually using the App to switch it on. Relay 1 switches a central heater (cv-ketel) ON/OFF. Relay 2 is now connected to a potential free input on a water heater system.

If you haven’t connected the IN, there is no power entering to go to Q1/Q2.
The L is only to power the module.

Yep, the module is powered. Using relay IN/Q1 works. The IN/Q2 doesn’t. It switches Off immediately.

I will remove the wires bwteen in and Q2. If it than does work, it is the input load…

Hm… With nothing connected between IN and Q2, the relay still switches off after a ON

Do you have three phase electric system in your house? If the central heater control voltage is from different phase than water heater system it will make a short circuit between phases because the FGS222 uses one common (IN) for both channels as stated before by Caseda. That could also break the FGS.

What about the loading of the output Q2? Was it over 1,5kW per channel?

No load at all! Both potential free.

This weekend I will reset the relay and try again.

Thanks for all support!

UPDATE
A reset of the relay solved the problem. S2 works fine again.