The guy from the official coolcamstore on ali told me that homey was not fully compatible with version 2.

Lol. Then that would be the same guy that started this topic asking how to fix it i assume…

Yes, his name came by in the conversation with de coolcam shop. 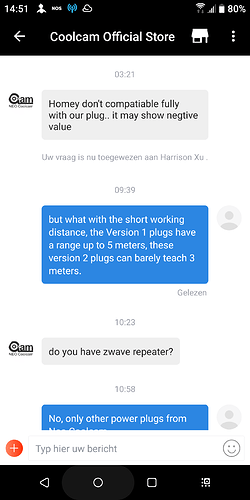 Well, he can say that it is Homey that is to blame, but then he is lying. And totally ignoring the fact that with several other major controllers the same thing happens with the same new plugs… And he knows that, it is mentioned to him by numerous ppl from over the world.

They are gonna test several things this week, (he said).
I also mentioned to them that the parameter number doensn’t correspond with the manual.
They are gonna look into this also, i hope that there’s gonna be some action otherwise these are the last plugs i bought from Neo and i will ask my money back.

The correct manual for V2 with the correct parameter values is attached to the other negative value topic as mentioned a few posts back. 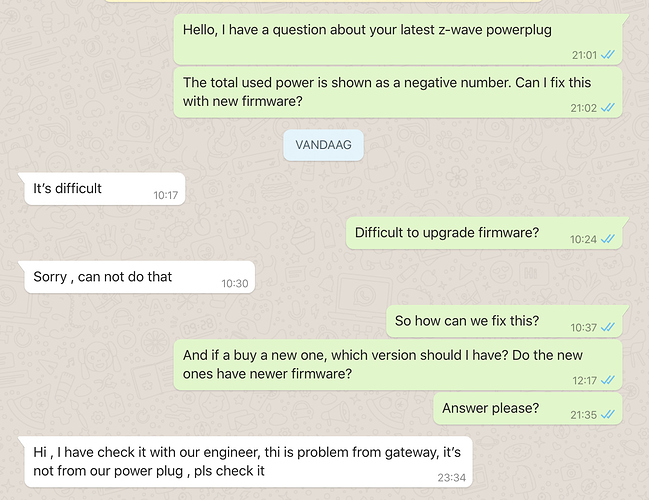 I can’t find anything on S2 on Homey. Someone from Athom that can respond to this?

They keep trying to blame homey (Athom) while issue is on multiple platforms . So the issue is with them … they need to solve it

we have test it with other hub,haven’t found out the problem.but we know from customers that Homey ,Domoticz,Toon hub ect have the problem.it happen because we update it to be new version.but some hubs may not fully compatiable with it.

if anyone who use smartthings,Fibaro have the problem,please tell us,we will check.

Another reaction from China…

@Coolcam-Harrison are you working for Neo Coolcam and am I talking to your colleague over Whatsapp?

I have the same problem with my Neo Coolcam socket. No more Neo Coolcam products for me, I switched to Aqura.

But then you also switch to Zigbee?

I already had some Zigbee devices. Also use 433Mhz and WiFi.

is this still the case for the power plugs?

good to know. also with the new ones?