What’s your experience in the amount of actions you can do at the same time towards Hue devices (via a bridge).

I have a simple flow that does 4 Hue calls, one delayed after 4 seconds, and one after 10 seconds. 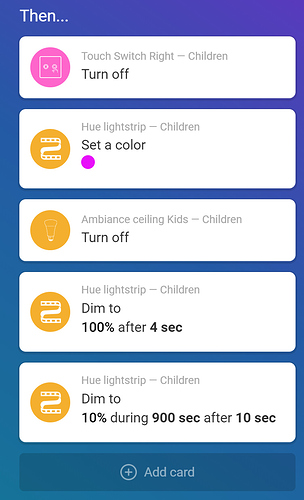 First of all, i have the feeling that ‘homey’ seconds are quite quick. But if you run this flow 20 times. You’ll notice about 10 to 20% of the times that one of the commands isn’t executed.

What’s the best approach. Is my Hue Bridge overloaded? Is Homey doing something weird?

I think i have 25 lights. That doesn’t yet sounds as too much.

Try to use the card , for example “turn living room” off

I know i can use that card, but I don’t want to do that.

I want to turn off a single hue device, turn the color of the hue strip to X, make sure its at 100% brightness and for the coming 900 seconds dim it to 10%

I have 2 Hue lamps in my living room that change from a cold light (during the day) to a warm light (in the evening) at a certain time within 120 seconds. Hue, saturation and temperature are changed simultaneously.
In the beginning the change started at the same time with both lamps and I had similar problems as you. It happened again and again that one lamp did not change from “cold” to “warm”. Since I delayed the start of the light change for one lamp by 5 seconds, it works 100%. It may also be possible to delay the start of the light change by less than 5 seconds, I haven’t tried that yet.

As far as I know, there is a 1-2 second delay between Homey and the Hue-Bridge. So it could be quite possible that commands are lost if too many commands are sent at the same time.