Homey 2.0 Home screen is so bad

Not sure how many enthusiasts you think homey has, but don’t think athom will think that way if there were more people that don’t care about a dashboard, then do care about having a dashboard.

If only 10% wants a dashboard I also would put my very limited time into other things then something the community can also build.
So as long as more people say “we want dashboards!” it will come, but if those requests stay way below that threshold, it will also be way low on their priority list.
The rule now just is, the more requests to Athom, the higher it will get on their priority list.

Just keep in mind, building a full fledged, changeable, dashboard, that probably will never meet everyone’s desires, takes a lot of time, not just a few weeks, but can take several months.

To me, a smart home shouldn’t need a dashboard. My smart home is voice controlled.
For situations where I don’t want to speak I use a switch or remote of some sort.

I’m not saying that there shouldn’t be a dashboard but i think a lot of us focus on different things. For me it’s much more important that Athome finish the fix/rewrite of the Zigbee protocol.

And this was my concern with this thread …

Is this a thread about how useful dashboards are, or about the Home Screen of the app?

Given the title of the thread, I believe that it would be best if we stuck with suggestions for improving the Home Screen for the iPhone and Andriod App. Rather then hypothetical discussions regarding Dashbaord.

I would like to see the Home pages, time line reduced to at least half its current size, I feel like its something I only need to see the first one or two items at a glance and if I want to see more … I can scroll.

There are lots of options what this freed up space could be used for, ‘most used’, ‘cameras’, ‘latest blog posts’, etc.

In my understanding the topic was started (not by me) about the lacking of a native supported dashboard functionality for customers who are not technical.

The preferred way to control the homey (voice, phone of dashboard) is very personal of course and the circumstances could be different.
I’m glad that some other people want to control it by phone and there is nothing against that but there shouldn’t be nothing against an alternative as well. Let me explain what in my situation is the motivation:

When I’m working in the kitchen I don’t want to get my iPhone first to control something and when I’m at home I don’t walk around all day with my phone anyway. Besides this the dashboard should allow all people at home to use it. Not all my children have mobile telephones and a babysitter or another relatives or guests should also be able to control things around the house.
Since a dashboard would be very important, such an app should be stabil and supported by Athom so the continuity is guaranteed.

On this forum I see a lot of comments requesting such an app but on the other hand there sometimes seems little room for constructive criticism because some people have different opinions.

There is already like 37 topics about Dashboards or missing the Dashboard. It’s just now we make another discussion about this under a different topic tiltle. Just like the presence topics. Let’s make a topic named “Homey, who is home” and discuss the presence again. U guys have all the room u want but why should we wanna discuss this over 37 topics?

A lot of good points and I hope athom at least look at this.

My end goal is to have some kind of visual tile or dashboard that my family can use with ease.
Set alarm , see alarm status, see current temperatures and change power connectors on/off etc.

Today this is very hard to achieve for the common family member since it’s hard to setup a good visual “dumb down” setup without everything showing and confusing.

Important here is that I am not interested in an tablet for this but in the phone (both Android/iOS).
I think any excuse about a dashboard has to work on ancient tablets is a lazy one , set a minimum requirement and people will have to follow those as in any other software.

About the “Devices” page in the Homey app.
I’m using an old tablet, fixed on the wall, to operate lights and other things. As I have organized the devices in zones. On the “Devices” page, very much space and visibility has been given to the device icons and the zone names are in a small and badly visible font. 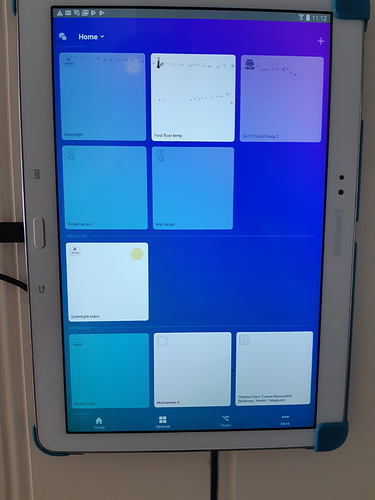 You can direct your suggestions to Athom directly through the request form: https://support.athom.com/hc/en-us/requests/new

I believe that at the moment, the official statement is that tablets simply aren’t supported (properly) by the mobile app.

It should not be necessary with any special support for tablet. The screen looks exactly the same on my mobile and on the tablet

I don’t know why Athom and Homey community make such a big deal over endlessly discussing what is required, instead of just growing up and making a proper use app, do that non technical people can just interact control (not program) the devices in their house. It’s all very well for enthusiasts to go on about the poor little company that needs the help of motivated nerds. If that’s the case, stay an open source project and don’t take money from customers.

Or j do the right thing and ust make one of these: https://www.fibaro.com/us/smart-home-app/

So you wanna compare, a small company like Athom with a large one like fibaro, wich has way more man/girl power and probbley a lot of more cash to spent.

Yes, Athom is small and doesn’t have enough man power. But they don’t make life for third party devs any easier, for instance by providing a proper OAuth infrastructure so we can create full-access web apps without having to resort to workarounds to retrieve tokens.

Even worse, they are stifling third party devs by not providing them with credentials (as they have done on some occasions in the past) stating that “we will be creating this feature ourselves”. Which was months ago, and as of yet, no such feature exists.