Will this app be available for Homey Bridge in near future?

The question is raised and technically there shouldn’t be a problem really. More a matter of myself not working for free for Easee

Any “cloud” enabled app will be released in the name of the brand.

I have a question about “Create schedule”-functionality.

Replied yesterday to your GitHub ticket. Copying the reply here

The basic charge plan is what is in the app, Scheduling.
The description for the start and stop time is the same as for the (new) weekly schedule. I haven’t used it so don’t know if it will stop charging at the stop time for any of the schedule types. Guess we would need to test it out.

Hello!
I am working on advanced flow, and want the flow to start when charging status has changed.
(I connect the car, charging status changes, price is checked and charging starts or pauses based on this).
I am a bit of a noob, but I am suspecting there is something wrong here.
When I add the “when” and “charger status changed to” it won’t let me set an option, and I guess it is supposed to be available here.

So as the picture shows, there are no available choises to make, and the flow does not start. I have set my flow to start when the price is changed, but this means charging will start in the period before the price changes - which is ok, but not optimal.
Am I doing something wrong, or is this a bug?

Thanks for a great app!
M

Can observe what you observe, would have to investigate the reason for it.
As a workaround, you can use the same trigger and add a Logic condition in the following step. The status the charger changed to is passed as a token that you can use in the Logic card.

I introduced a new trigger which works as you’d expect. The old trigger is still there with an updated text “Charger status changed”. Please give the test version a go.

I’m implementing some changes to the app (not released yet) and would love to hear some feedback on what you think about it.

Some positive side effects of the above are;

I just thing it sounds great

Thinking of the slider for dynamic current, it will not report current value however, right? This might be tricky, it will be in “percentage” or how the max. value will be defined? Just thinking out loud.

Thinking of the slider for dynamic current, it will not report current value however, right?

It will report the current value, fetched each 15s from the Easee API, also visible in insights.
The value is in current, ie measured in Ampere (A). My comment about “little crappy” refers to the fact that the Homey UI doesn’t show the unit (A), nor displays the value of the slider. You have to guess the scale, so I understand it is confusing. The max value of the slider is the circuit fuse size as defined in Easee, in my case 20A. The circuit fuse size is displayed under advanced settings on the device in Homey.

Also forgot one thing I also added. Found an endpoint for polling the lifetime energy from the charger to the Easee cloud. I trigger it every 5 mins as it is implemented now and it seems to work. The stats that I log to a database seem to report charging, which is based on the increase of the lifetime energy, for the correct hour. It needs a little more verification but looks promising. Previously the lifetime energy was updated once per hour and for instance, energy used during the hour 02-03 ended up being recorded during hour 03-04 - a 1-hour lag. It broke my nice graphs, and I know some other users have commented on this as well.

Since the update I have some weird issues in advanced flows.

I confirm, can observe the same, not only in advanced flows - I’m on version 1.4.7 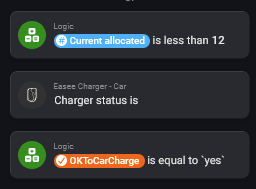 Creating a new condition it seems to work

So this occurs for existing flows, but adding the same condition again then it works?
(Don’t experience this problem myself)

Yes that is correct. I already fixed the flow and it works again. Keep up the great work really like the app.

@Richard_B @Huub_Van_Vilsteren now I have realized, actually all those flows are broken thanks to this, I thought the conditions are just not appearing due to some internal Homey / cosmetic error…

When I test such flow, I get error :

What is interesting, it’s not caught by Flow Checker - I will ask martijnpoppen if he would be able to catch this, but anyway it looks like all such flows have to be repaired - so it’s information to all users of your app, at least when using version 1.4.7, as it triggered breaking change.

actually all those flows are broken

Looked through the code now and understand the problem. Didn’t realize this before, I improved (or so I thought) the code and put all statuses in an enum in the code and used the autocomplete feature for this condition. The argument has the same name, but it caused a change in the id’s in the dropdown

Clicking the device will turn it on/off. I’m not that keen on this logic but there is no easy solution to get out of this “feature”.

You may be wanting to set the uiQuickAction to false - this should prevent the user from accidentally turning it on/off by clicking the icon, if that was what you was looking for. (I believe you can set it for the standard onoff too if you list it under capabilitiesOptions)

Not sure if I understand this one. Why can’t there be a single onoff? When should I use the one over the other? / when not to?

Visualized with a “slider” which is a little crappy, but don’t see any options.

I agree the Homey UI is very limiting.
The other option would be to use uiComponent “picker” and have all 40 numbers encoded as enum values including the unit.

Speaking about new capabilities, maybe the measure_battery would be useful too? 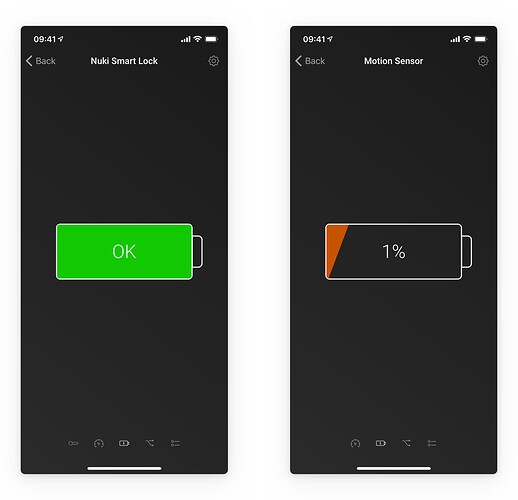 enum in the code and used the autocomplete feature for this condition. The argument has the same name, but it caused a change in the id’s in the dropdown

Yeah, this is kind of annoying. I have experienced this issue myself. The way I solved it was that I marked the old action card with the tag “deprecated” and used a slightly different name for the new action card. This would allow the old action card to still function but they will disappear for new users. The only drawback is that you have some old dangling code that needs to be there to support old users.

Thanks for all your comments, appreciate it

I read somewhere that this doesn’t work, that you then have to override the entire onoff capability with flows and all. But I should give it a try.

Not sure if I understand this one. Why can’t there be a single onoff? When should I use the one over the other? / when not to?

I use Tibber and then the charger behaves differently. But my understanding is that if you don’t use Tibber the car will start charging every time you connect it. Then you can stop it using the on/off capability. But a better way as I read lately would be to set access to locked. Then you can connect your car and it won’t start charging. Instead, you start the charging via the on/off capability. I have used the toggle API endpoint which will automatically use start/stop or resume/pause.

One option is that your app stops a car from charging if it starts when it shouldn’t. Ie this will happen every time a car is connected to the charger. Then access is unlocked, as is the default.
Or one can set access to locked, and the charger shouldn’t start charging unless you tell it to. Setting access to locked should be a one-time thing, as per docs it shouldn’t change.

Below are the docs from Easee that made me come to this conclusion.

authorizationRequired Set to enable authorization. Charging will not start until the charge point is authorized.
API endpoint
https://api.easee.cloud/api/chargers/{id}/commands/start_charging
Allows a charger with ‘authorizationRequired’ = true to deliver power. Otherwise it will have no effect

The other option would be to use uiComponent “picker” and have all 40 numbers encoded as enum values including the unit.

This might be better than the slider actually since it doesn’t show any insight into scale or current value.
Might give this a go when I’m back. Going off for two days with work right now.