While uninstalling (test) app, it's devices disappeared. By design? --> YES

Homey Pro. I was testing an testversion app a.k.a. experimental app, and I decided to uninstall it, reboot Homey and start over by installing it again.
The app was installed using the app store, nothing special here.

But after the uninstall, I noticed all (35 ish) devices were gone…
Is that by design, or is this a new discovered function?

It’s by design. When you uninstall an app, all the associated data is deleted as well.

Thanks for the quick reply, Adrian.
So, this is only the case with testversion apps?

I switched a while between the Athom and community HA apps, and their devices don’t disappear, they just become unavailable for the overwritten app (both apps overwrite eachother).
I probably never uninstalled an test version app before. I didn’t expect the devices to be removed

It should be the same for both stable and test versions so maybe I’m wrong. I will do some checks and get back to you.

Tested it. There is a warning before uninstalling, I just didn’t bother to read …
HA Devices disappeared after uninstall

I have just installed a stable app on my development Homey, added a device and then uninstalled the app and the device was deleted at the same time. So seems to be as I expected.

The warning is quite clear indeed! Case closed! 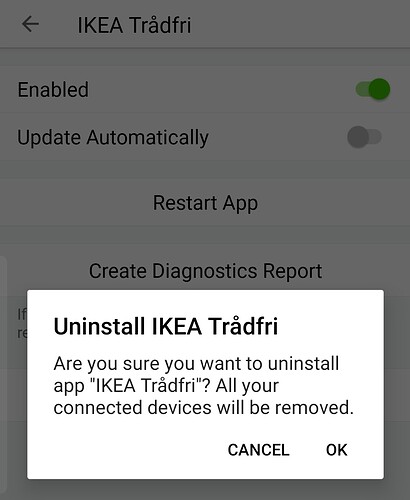 There is one exception. If you install an app via CLI in debug mode (homey app run) anf perhaps overwriting an existing app, add devices and kill the app in the console window (CTRL+C), the app gets uninstalled and the devices are still present. That’s by design, too. So you can install a new development version and test again with existing devices